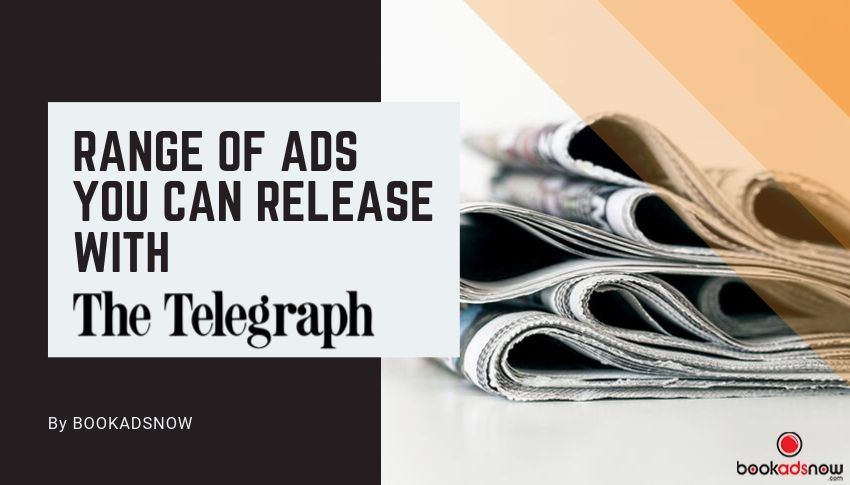 The Telegraph is one of Kolkata’s top English-based newspapers in today’s journalistic sphere. It has its origins dating back to 1982, but within that short span of 37 years, it has become a favoured publication by individuals and families. The same applies to advertisers as well.

Advertising in The Telegraph brings several advantages for those releasing ads in this newspaper. Increased visibility and a higher rate of engagement are a few of what you can expect. The most important of them all – trust. This newspaper has found its way into the hearts of many, and its name has been linked to prestige and esteem.

Apart from that, the journalistic content is produced by an expert editorial team that provides keen insight into the crux of stories. Its objective viewpoints and credibility have earned it a distinct place in the cities it reaches. Whether a public notice advertisement or a tender, releasing an advertisement in The Telegraph is sure to give you the results that you require.

However, are you acquainted with the various types of ads that can be released?

First and foremost, it’s important to know about the formats of each advertisement. Whether one chooses to book obituary ads in a newspaper or recruitment ads in a newspaper, there are a few things that should be aware of:

Based on this foundation, it is easy to release your ads based on your budget and intended impact.

For advertisers facing a budget-crunch, classified ads will surely get the job done. For those who wish for optimum impact keeping budget in mind, advertising display classified ads in The Telegraph are the best choice to go with. Surpassing both, a display advertisement will provide the best engagement and influence but at a higher cost.

According to these formats, ads are then categorized based on their nature:

Among these, there are other ads relating to change of name, lost and found, etc. For any type of ad across any type of format, The Telegraph is sure to serve your purpose.

Why The Telegraph as a Medium for Newspaper Advertisements?

Choosing this newspaper entitles one to release ads in several formats as demanded by its nature. This freedom allows advertisers to easily use these to suit their requirements and needs.

According to the 2018 figures of the Audit Bureau of Circulations, it distributes a total of 401,083 copies daily. Thus, it provides a good visibility to audiences, especially those in the eastern zone of India.

Releasing an obituary or a notice advertisement in this newspaper is sure to provide a successful ROI. Coupled with a good reputation and even better advertising rates, it becomes a force to be reckoned with.

In regions such as Kolkata, Siliguri, Guwahati, etc., advertising in The Telegraph is sure to capture the attention of the target audience. It has gained the favour of several regions and it will provide the visibility you need.

As an English daily, each of its news stories are made keeping the accuracy of events and need for objective reporting intact. One can find fact-based coverage and are encouraged to draw their own conclusions.

As a result, The Telegraph stands as one of the top English based newspapers currently. Blending the perfect mix of elements, it provides well-rounded information in simple presentation styles and language. It's no wonder that it holds such an esteemed place in the sphere of journalism.

For the most insightful news and current affairs, The Telegraph should be your newspaper of choice.