Why Newspaper, Magazine and Television Advertising are Still Effective in 2019 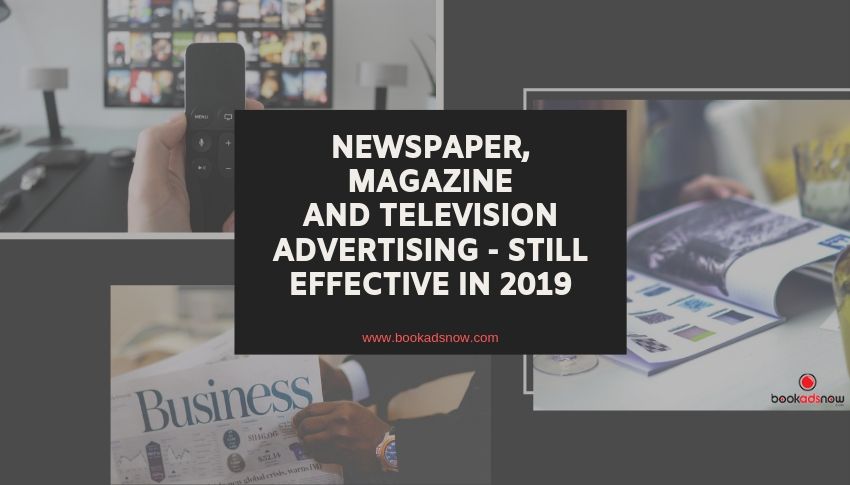 The charm of television lies in its effortless ability to unite and to invoke excitement and bliss among friends and family. In fact, it did much more than that. If you rewind to the early television shows such as Ramayan in 1987, hundreds of people would gather around a single television set every Sunday morning. Streets were deserted, the noisiest of places fell silent, and this strange box commanded the attention of a huge chunk of the Indian audience overnight.

Netflix and Amazon Prime have emerged as on-demand services for popular films and TV shows. For a small subscription fee, you get access to a wide variety of media instead of waiting till 9pm for your movie. Not just limited to media, but you can also find smart homes and voice-controlled features. Rumour has it that Alexa and Siri might take over at this rate!

The question on everyone’s mind – Is digital really taking over?

More specifically – Is there relevance for advertising via television, newspapers, and magazines in today’s era?

An Overview of Print and Television as Tools for Advertising

It’s time to get familiar with the basics:

Television is by far the most effective medium of advertising due to its audio-visual nature. It is known to offer credibility in terms of brand promotion and advertisements. It also connects audiences emotionally or rationally (demonstrating its high impact) while displaying an improved reach compared to other mediums. Advertisers receive more scope for advertisements as they can choose between several channels to release a variety of advertisements.

While it is a costly affair, the results speak for themselves. The same can be said about newspaper advertising. Even with digital means or with television, newspapers are still efficient contributors to lead generation and are preferred by a vast segment of population. At the same time, newspapers have a loyal readership base and can be used to target audiences on a local, regional, and national level as well.

Magazines are specifically based on individual subjects. Offering information on various topics of interest to readers – health, lifestyle, fashion, etc., advertisers receive a lot of options when releasing advertisements through magazines. For instance, Sportstar is a good medium for sports-related ads, Men’s GQ for fashion and lifestyle, etc.

What does Science and Statistics have to say about these Forms of Advertising?

Here is what science points out:

Audiences tend to be more mentally aware while processing print content. Traditional print media is characterized by its ability to invoke more focus and engagement from readers. On the contrary, digital messages seem more obtrusive and disturbing than friendly. Digital ads are normally scanned quickly in an attempt to start a game or continue a video or song.

The same can be said for television ads owing to its obstruction from a movie or TV show. However, choosing to place it in-between a highly awaited India vs Pakistan match or during a Barcelona vs Real Madrid game will surely fetch your ad good viewership figures. Regardless of the timing, television ads are the most effective medium to get your brand message across.

Newspaper and magazine ads are also a great medium since they are linked to prestige (owing to a publication’s long years of existence) and are more ‘real’ since we can actually feel the paper touch our skin. Hence, it turns out to be a more concrete medium. Digital has no clear identity in the eyes of individuals since we see a random pop-up on our screen telling us something. Thus, it is more likely to place trust in newspaper advertisements in today’s world.

Here are a few statistics that display the existing scenario:

According to the IRS (Indian Readership Survey), television reaches 77% of India’s population (aged 12 and above) while newspapers and magazines take up 39% and 6% respectively. However, the internet reaches 24% of the population.

Also, the IRS recorded an increase in total newspaper readership by 4% (from the period of 2017 to Q1 of 2019). The readership for English and Hindi dailies has gone up by 10.7% and 3.9% respectively. In simple figures, there was an increase from 407 million readers to 425 million readers at the end of 2019’s first quarter.

These figures point at the influence that a newspaper provides even with the presence of digital means of advertising. While most thought the popularity would drop, it is in fact, still on the rise. In case you’re wondering about the threat that the advent of digital poses to the traditional forms of advertising, keep your worries aside.