Telegraph: The Most Reliable Newspaper for Advertising in Kolkata 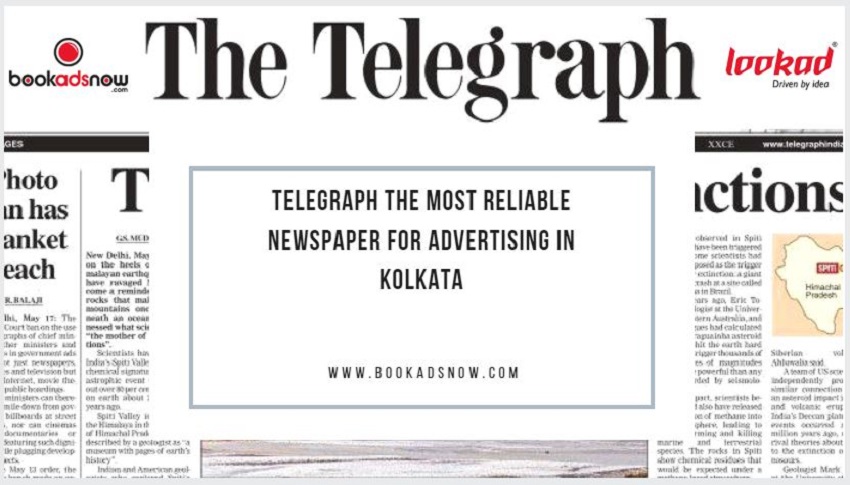 With a total readership of 14,08,000 in the eastern zone of India including 7,46,000 readers in Kolkata itself (as per National Readership Survey 2006), the Telegraph is the largest circulated newspaper in eastern India. Given the popularity of the newspaper, brands and individuals make it a point to publish a Telegraph advertising if their audiences they wish to reach out to are primarily located in the eastern zone of India.

When compared to other English dailies in India, The Telegraph is considered a youthful newspaper for it only came into existence on July 7, 1982. In fact, it is regarded as a modern newspaper keeping its recent work in mind in the field of media; they have been quick to break news, discover scoops or even when it comes to investigating news. Furthermore, their exquisite journalism skill has garnered them prestigious global print awards like the SNAP and IFRA. Hence, these facts give a brand or an individual the very reason to book newspaper advertisement in The Telegraph. Moreover, there are numerous positives of publishing the Telegraph advertisement, they are as follows:

Unmatched Reach: The Telegraph, has 5 editions in all, The Calcutta edition, The South Bengal edition, The North Bengal edition, The Northeast edition (the Guwahati split) and The Jharkhand edition. Additionally, as per the reports by Audit Bureau of Circulations (July to December '08), the approximate circulation of this newspaper was approximately 4,84,971 per day. This proved that they reach out to the almost most English-speaking household of the city. Hence, their extensive circulation encourages brands and individuals to book The Telegraph advertising.

Ad Options & Formats: As an individual or an advertiser, The Telegraph enables you to book newspaper ad of various types and formats. The prices of the advertisements depend on the format and advertisement type opted for by the client. The types of advertisements are as follows: matrimonial Ads, property Ads, notice Ads, obituary Ads, situation vacant, situation wanted, and change of name among others. Additionally, each of these can be released in three broad formats namely: Display Ad, Display Classified Ad and Classified Text Ad.

Effective Supplements: Apart from the main issue, the Telegraph comes with a variety of supplements that delve into specific subjects. Hence, brands or individuals whose interest or commercial direct aligns with the theme of the supplement can book newspaper ads online in these supplements. This technique works best for the brands when that aim to achieve a high viewership for their Telegraph advertisement and are afraid that the effectiveness of the Ad might get diminished in the main issue. The popular supplements which accompany the Telegraph newspaper are Career graph, Metro, Jobs, and T2.

Why Booking Newspaper Advertisement through Lookad?

Lookad India Pvt Ltd- a leading Newspaper Advertising agency with its HQ in Kolkata, has been working towards providing their clients with tailor-made media buying and releasing services for over 3 decades. Founded by the Late B.C. Lunia, Lookad came into operation with the vision to maintain a sustainable growth in each media domain through their relentless hard work and passion. They aim to grow in an industry of cut-throat competition by preserving the commitment towards their clients and meeting deadlines.

Lookad India Pvt Ltd focuses on tying up with top media houses like The Telegraph along with medium and small-scale media brands as well. They have also taken the step to partner with Dentsu Aegis Network who guides Lookad to come up with an effective newspaper advertisement structure in order to boost a brand's ROI (return on investment). Apart from offering tailor-made solutions, their media experts will provide the clients with the best rates for advertising in The Telegraph. This allows them to stand out in the market. All these features together make them one of the most reputed and reliable ad booking agencies of India because of their sheer experience and contacts with the media houses on both a local and national level. With Lookad, the clients are allowed to advertise in mediums other than the newspaper like radio, television, online media and OOH (Out of Home).