Why and how to give advertisement in Newspaper? 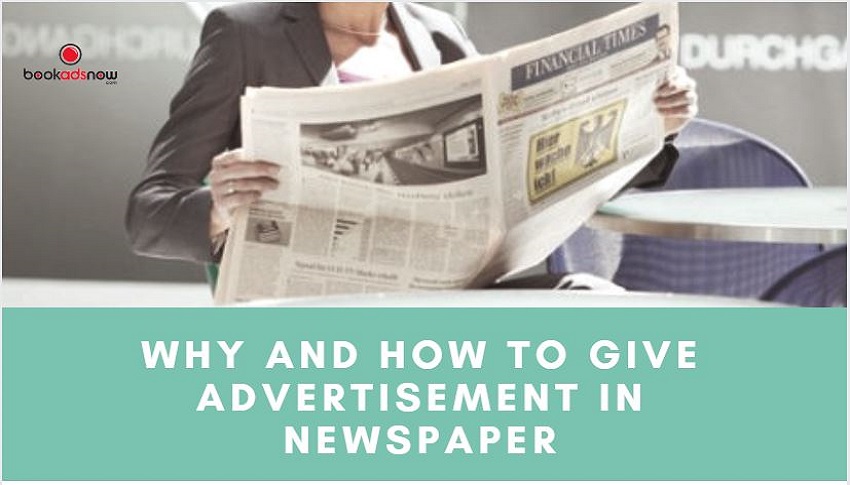 In this age of digitalization, many turn to their computers, mobile phones and tablets for information and news. People wonder about how to give ad in newspaper when there are so many platforms to advertise on. But even now, newspapers have an edge against other mediums of advertising. There are a variety of factors involved:

Factors that make advertising in newspapers a better choice

Trust: Newspapers are viewed as a trustworthy medium since digital advertising is sometimes misleading and is often termed as ‘spam’ from unidentified sources. Hence, people often tend to trust content from an ad in newspaper. Similarly, the product or service advertised fosters more authenticity when displayed, along with a lower newspaper advertisement cost.

Reach: Newspapers cater to specific regions and languages, thereby making it an effective channel for advertisement. Newspapers have a better audience in that respect. Hence, an ad in the newspaper will allow advertisers to target specific demographics that are harder to reach. This allows the access to a specific and smaller-size audience as well, including those in remote geographical locations.

Awareness: Advertisements on mediums such as radio are often passively taken in by audiences. While watching a film or hearing a song, an ad enters and you basically just tolerate its intrusive presence since it seems like an obstacle interrupting you from something. However, a newspaper reader will consciously come across an ad, and will successfully garner more attention from fully aware people (making the ad more effective in nature). While the average attention span of an Internet user is 8 seconds, newspaper readers spend comparatively more time reviewing information, including advertisements. Consumers give newspapers their undivided attention and thus, they actively consume content.

Timeliness: Market sensitive brands are better advertised through newspapers. Since the medium is immediate and timely, any ad can be placed in a newspaper in a matter of hours, unlike other mediums. The time-sensitive nature of an ad in the newspaper and fresh content make an ad seem important and appealing. Last-minute changes can also be applied to your ad.

Cost: When approaching the matter of a newspaper advertisement cost, it is less expensive than other mediums. The cost of advertising on television is based on how long the ad runs. Further, the specific timing of the ad determines its cost as well. Repeating the same ad will cost more, along with each second the ad runs. Costs are lesser for newspapers, and there is the benefit of the ad in newspaper lasting the entire day on the page.

While these are the benefits, most ask about the procedure of how to give ad in newspaper. In short, a good ad is based on its content, individual choice of medium (such as television or newspapers) and the ad agency which is selected to book the ad.

How to Give ad in Newspaper?

An advertising agency is a firm that is dedicated to creating advertisements based on a company’s product/service as well as creating corresponding plans for its promotion. It is responsible for the client’s advertisements leading to greater exposure and profits in the long run. This is achieved through its in-house expertise with people who are specialists in different marketing and advertising techniques. Selecting a competent ad agency will generate more growth and profits for the company.

One such ad agency that fits this description is Bookadsnow. With over 30 years of successful enterprise in the media industry, we consist of a team of proficient in-house experts that have contributed to a plethora of success stories for clients. Furthermore, as an INS accredited agency, widespread brands and media houses across the nation have developed trust in us. More prominently, ad rates are negotiable in nature due to the understanding and amicable relationships shared. The best newspaper advertisement cost is provided here as well. Hence, owing to this reason, Bookadsnow does not follow the policy of displaying card rates, unlike other ad agencies.

Get the best results for your ads through Bookadsnow! Call us @9830400021 or drop us a mail at info@bookadsnow.com to learn more about booking ads in newspapers and any other mediums of your choice.

How to Give a Newspaper ad in another city?

How to Give Obituary ad in Times of India Newspaper?

How to Give Display ads in Times of India?

How to Give Remembrance ad in Times of India?

How to Give Divorce Notice in Newspaper?

How to Give ad in the Hindu?

How to Give Tender Notice ads in Times of India?

How to Give Ad in Daily Thanthi?