Things You Need To Know About Newspaper Advertising Cost 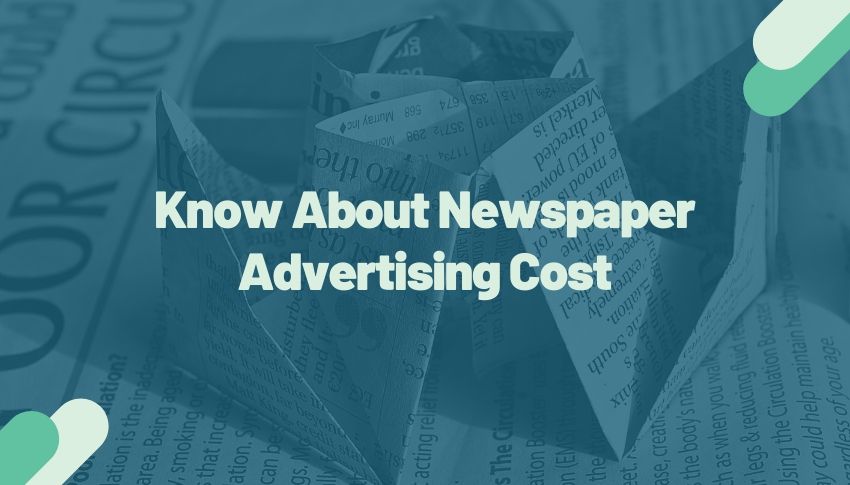 Our 30 years of experience with Bookadsnow has taught us that one needs to consider a plethora of factors while booking a newspaper advertisement. While it's not rocket science, understanding or considering these key factors is essential, thereby marking the success of your newspaper advertising strategy. Such factors also largely determine newspaper advertising rates, thereby further helping you to conceptualize and execute the whole process.

As an advertiser, you'll come across multiple online forums and websites that will exhibit rate charts. However, most of them come with too many sub-categories, special rates, clauses and unstated terms and conditions. Deciding on a particular Ad type by just viewing the newspaper advertising rates is not viable. What's more? Every newspaper will showcase a different Ad rate determined by a plethora of factors. Are you wondering what are these factors? Delve into the next section of the blog to learn the same.

Here's the potpourri of diverse factors that define a newspaper advertising rate.

Ad Size: If the content of your newspaper advertisement consists of lines as well as images, expect the price of such advertisements on the higher end. While most publications will provide you with a standard-sized Ad space where your Ad must fit, some will grant you with unconventional Ad space such as a 'U' shaped Ad around the edges of an open paper. Again, such unconventional sizes and shapes will incur more expenses for the same.

Colour or Black & White: Another factor that largely affects a newspaper advertisement rate is the presence of colour. Going by the rule of thumb, coloured Ads are more expensive than the monochrome ones. A few newspapers also provide different rates for multi-colour advertisements and those that only have one added colour called "spot colour".

Day of the Week & Section of the Paper: If you releasing Ad on a Saturday, expect to pay more and if you are releasing the Ad on a Sunday, expect to pay the most. It is because during the weekends, especially on a Sunday, individuals get enough time to scan through every page of a newspaper which in turn increases newspaper advertisement viewership. Apart from that, a newspaper advertisement rate will automatically increase if it's in the main section of a newspaper rather than in a sports or travel section.

These are the primary features that determine a newspaper advertising rate. Also, the placement of a newspaper Ad determines the expense. For example, if your Ad is placed on the right-hand side of a newspaper, you’ll have to pay more rather than the one on the left-hand side. Again, Ad released in the front page or released in a jacket format is will cost you more.

Alternatively, booking an Ad through a newspaper advertising agency might provide you with a discount on your overall Ad rate. For example, at Bookadsnow, we work differently. We do not display the card rate, unlike other newspaper advertising agencies. We negotiate the same with the publication in concern on behalf of our clients and agree to the best Ad rate in the market.