What are the benefits of Placing Newspaper Advertisement? 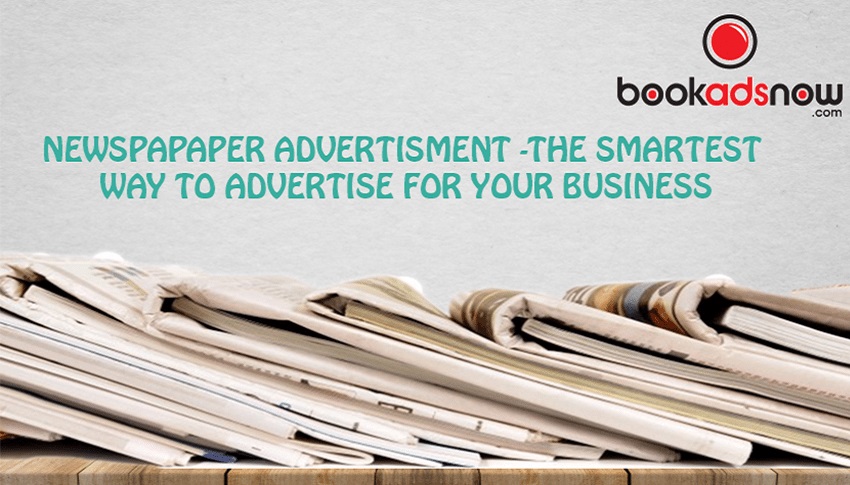 While technology continues to modernize, advertisers face the constant challenge of how to reach and engage customers in the best way. While there are numerous mediums of advertising to choose from, as the saying goes ‘Old is Gold’, the traditional form of advertisements still reign supreme.

Newspaper readers often actively look for advertisements in newspapers to search for deals and coupons. Placing your ad in a newspaper doesn't guarantee that readers will notice it, but a reader actively looking for deals is likely to notice your ad, take the time to read it and possibly act on a sale or offer.

A trustworthy source of information

Being one of the oldest forms, book newspaper ads online has been shown to be a trustworthy source of information among readers. A recent study shows that newspaper is the most trusted paid medium at 58%, followed by television (54%), radio (49%) and online (27%).

Book Newspaper Advertisement to receive more flexibility than any other advertising medium. Advertisers can choose their preferred size, the location of the ad, section and the page along with the design for which they pay accordingly. Unlike other mediums, advertisers have much more control over the final product, by working directly with newspaper staff.

The digital age has pretty much killed the human attention span. Most people tend to multitask while watching ads shown on mediums like TV, radio or internet, such is not the case for newspaper ads booking. Print readers don’t typically multitask while reading a piece of information, which makes them concentrate on the ad with fewer distractions.

From Full-Page Spreads To Classifieds

As an advertiser, one must consider a number of factors such as their target audience, their budget and so on. As a result, choosing what type of advertising one should opt for can be a little confusing at times. In such a case newspaper provides a wide range of advertising options from large full-page spreads to small advertisements in the classifieds section and everything in between.

Book Newspaper Ads to pay less than what you would pay for a television, radio, or a direct mail advertising campaign. As the newspaper sales team works directly with advertisers to create Ads, there are no hidden charges or additional costs. Moreover, newspaper advertising can be customized to meet the budget of an advertiser.

Bookadsnow is a Kolkata based online media planning and buying portal that streamlines the Ad booking experience for clients at captivating rates. They have a long-standing presence in the market with good credibility for the past 30 years which can’t be surpassed. They help their clients with creative layouts keeping in mind their budget and personally negotiating with the concerned newspapers for the lowest Ad rates. They believe that media is not a commodity to be bought or sold online hence they keep the transparency intact and do not display media rates online. With Bookadsnow one can book ads anytime anywhere without hassles, making it simple, fast and easily accessible anywhere in the country. To book newspaper ads online with Bookadsnow, get in touch @ 9830400021 or drop us a mail @ info@bookadsnow.com.