Things to Know Before Booking Ad in Economic Times 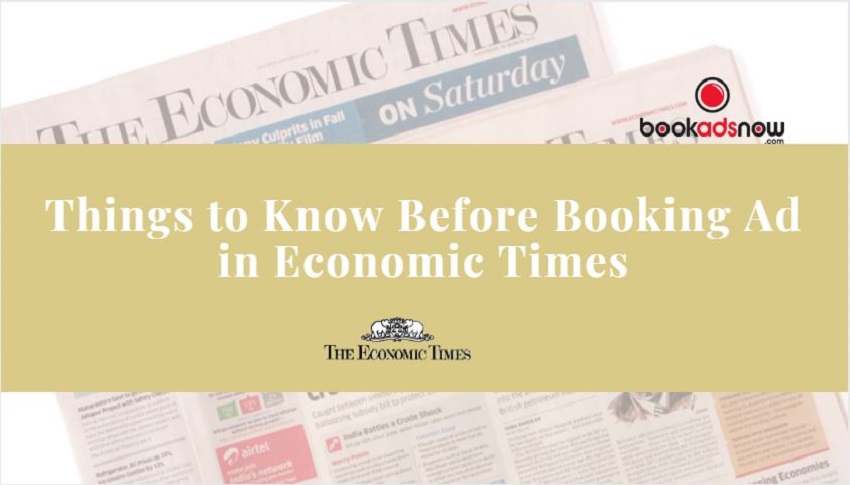 Economic Times- a name which is known to almost every Indian owing to its exquisite performance and quality news which they provide the readers. An English business daily which started operating from 1961 under the ownership of Bennett, Coleman & Co. Ltd., Economic Times made its presence in the media industry with the goal to target the business class of the society along with the individuals who have a keen interest learn about business facts. Hence, from Economic Times expect news catering to the business world after conducting an in-depth research. This has led the newspaper to earn 800,000+ readers along with a circulation of 377,789 copies dailies. We hope with the help of such significant numbers, you can fathom the popularity of the newspaper in the nation.

Know your Ad Booking Format: Before releasing an Economic Times advertisement, make sure to have a clear idea about the Ad format you want to indulge in. Ad formats are divided into three broad formats- Classified Text Ad, Display Ad, and Display Classified Ad. Choose the format that will align with your Ad and accordingly book newspaper Ads online to reap the maximum results.

Know the Type of Ad You Want to Release: Logically, this point should come first but nevertheless, it's better to mention it rather than missing out the point altogether. Coming to the main subject, there are different types of business Ad. You can choose to release a financial notice Ad, public notice Ads, tender notice Ads, etc. as per your requirement. Hence, know your Ad type and design the layout accordingly.

Focus on the Days: Do you want to book Advertisement in newspaper for a weekday or a weekend? Or are you intending to release a newspaper Ad campaign for several days? Know your requirement and accordingly release an Economic Times advertisement as it also decides your Ad rates.

Locations: Economic Times has a plethora of editions to release a newspaper advertisement. Hence, recognizing the edition that will fetch you the maximum positive result and accordingly book newspaper Ad.

Hire an Ad Agency: While most of the advertisers will not consider this point, it is crucial to hire a proficient Ad agency (especially if you are a first timer). A newspaper Ad agency will guide you all through your Ad booking journey along with suggesting you the right newspaper that will fetch the maximum positive result. Apart from that, there are other secondary and tertiary factors which makes it vital to release a newspaper Ad via an Ad agency. Considering all these factors together, there is one newspaper Ad agency who will fetch you the best results of your newspaper advertisement.

But Why Bookadsnow to Book Ads in Economic Times?

To start with, allow us to correct ourselves in the first place. We are not a mere Ad booking agency but an online media planning, buying and releasing portal with 30+ years of experience in the media industry. An INS accredited body, we at Bookadsnow strive to provide our clients with the best Ad booking and releasing experience so that they keep coming back to us. Our strong relationship with the various media houses allows the clients the new clients to trust us and enables us to create a successful story for each client.

Furthermore, our team of proficient workers guides our clients on the path of releasing a hassle-free newspaper Ad for a better ROI. However, what makes us stand out in the market is our policy of not displaying the card rate for Economic Times advertisement. It is because we have the potential to negotiate the Ad rates on behalf of our clients with publication houses like Economic Times, thereby allowing us to provide the best Ad rates to our clients in the market. Hence, Bookadsnow is the next generation newspaper Ad booking platform that will enable you to wrap up the process within a few simple steps.