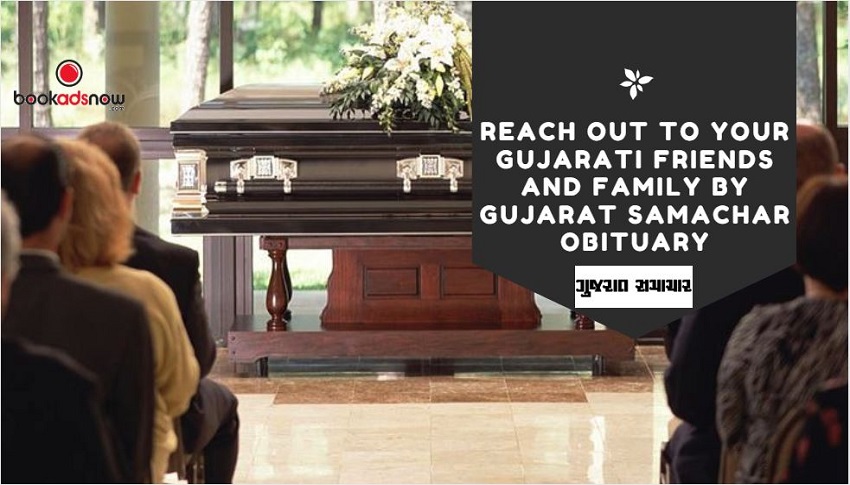 If you are searching for the simplest way to book Gujarat Samachar obituary Ads, then you have landed on the right page! And it is quite valid on your part to seek for a platform that will enable you to book obituary Ads in a matter of a few minutes because-

Hence, keeping all such pointers in mind, Bookadsnow was designed. However, before we delve into Bookadsnow and its incredible way of working, we shall learn a bit a Gujarat Samachar as a publication.

Down the Lane of Gujarat Samachar

Of all the newspapers, why did we pick up Gujarat Samachar for releasing obituary Ads? Gujarat Samachar, with its HQ in Ahmedabad, experiences a daily circulation of 4642000 copies out of which 1079168 copies are circulated only on Sundays. Not just that, the publication has a total readership of 55,10,000 readers in Gujarat and Mumbai together. Hence, from the data in the very first section, you can probably fathom the popularity of the publication in the Gujarati community. A Gujarati daily (as the name suggests), Gujarat Samachar is owned by Lok Prakashan Ltd and has its prominent presence in Ahmedabad, Vadodara, Surat, Rajkot, Bhavnagar, Mumbai, Mehsana, Bhuj, and New York City.

With its establishment in 1932 by Shantilal Shah, the newspaper started operating with the aim to provide rock-solid content catering to politics, global news, finance, economy, lifestyle, entertainment, food, and the likes. The proficient in-house team leaves no stone unturned to provide the readers with quality news to the Gujarati community owing to their incredible journalistic skill.

Hence, the above information clearly justifies the act of releasing the Gujarat Samachar obituary Ad. And with the infusion of Bookadsnow in the process, expect your success rate of the advertisement to go a notch up!

But why Only Bookadsnow of all the other Ad Agencies?

Just a small correction here. Bookadsnow is not just a mere Ad agency. It is an online media planning, buying and releasing portal where Ad booking process has been simplified into a few simple steps. Now indulge in online Ad booking system that will not even burn your pocket.

Our presence in the sphere of media goes beyond a period of 30 years, thereby making us an expert in the field of releasing newspaper Ad. With a team of proficient in-house experts, we have generated a plethora of success stories for our clients which enables brands and media houses all across the nation to trust us. The INS accreditation simply accelerates this trust on us. However, what makes us stand out in a market choked with other newspaper Ad agencies is our policy of not displaying the card rate for Ads. Our good work has given us the power to negotiate the Ad rates with the publication in question on behalf of our clients, thereby allowing us to provide the best Ad rates in the market.

As a bonus, especially for the obituary Ads, we can provide our clients with a readymade template which will reduce their work of designing the Ad layout and lead to a faster release of the advertisement. Hence, Bookadsnow has given a whole new meaning to online Ad booking system with uncountable perks.

Step 1: Select obituary Ad from the Adoptions available on our Homepage.

Once you are done with the whole process of booking Gujarat Samachar obituary Ad, our in-house media team will contact you and guide you with other details of your advertisement along with setting up a relevant budget.