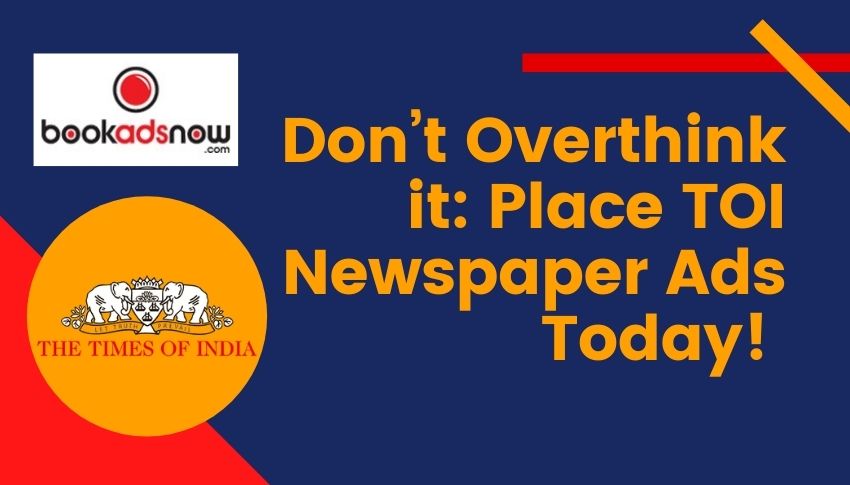 For small businesses out there trying to make the best out of their budgets, choosing the right media for advertising can be a nail-biting experience. ‘Where should you spend’ is the question to ask indeed. With a careful evaluation of your target audience and the regions they reside in, it maybe a bit easier to come to a conclusion.

All in all, media planners must choose a medium that balances benefits with cost.

And no, TV is not the only media that exists.

Advertising via newspapers has proved to be an effective channel way back in the 16th Century and even now. Trusted, popular, good engagement and great reach as a platform, it reaches millions on a daily basis. Moreover, they are more receptive than digital ads and involve less expenditure than TV ads. Surrounded by a plethora of benefits on all sides, it is truly an option worth considering.

So how can you think of advertising and not think of releasing TOI ads?

Aren’t familiar with the publication? Here’s a small recap.

•    India’s most popular daily.
•    The undisputed leader in its category.
•    The top-selling English publication.
•    Third largest in India by circulation.

You will that there are more benefits with the Times of India than actually meets the eye. Even so, many shy away because of the advertising cost they think is involved. As a matter of fact, the Times of India advertisement cost can actually become amicable when you work with ad agencies like Bookadsnow.

Now that the major obstacle is covered, let’s get down to the magic behind this publication.

Unsure About Your Next Move? Here’s Why TOI Ads Reign Supreme

This newspaper has its roots in the year 1838 as The Bombay Times and Journal of Commerce. It was only in 1861 that its modern-day name struck. Far from just its quality of journalism, it has proved to be a great solution for brands looking to maximize their impact in terms of brand awareness, lead generation and other objectives.

Let the statistics speak for itself:

When it comes to the dissemination of news and information, this newspaper is a leading name today. It wins with regards to both circulation and readership while also helping brands achieve their goals with ease. What also separates this from the others is its role as a household name which has been there for generations.

Whether the Times of India obituary ads or tenders, its compilation of strengths has made it the first choice when selecting the right media. In case it’s not clear enough, here is a list of concrete reasons to pick TOI:

These are all a part of the deal when you choose TOI ads.

Of course, choosing this publication is the first step to bridging that gap between opportunity and success. The next step of course is choosing the correct ad agency to have your ads released. What better place to get the best Times of India advertisement cost than through Bookadsnow?

Been in the media industry for 30+ years, it has been instrumental in the success of brands and businesses alike. Last-minute bookings (for Times of India obituary ads), flexible payment options, best newspaper advertising rates and so much more at your disposal!

So get in touch today and watch the benefits unfold with TOI ads through Bookadsnow.