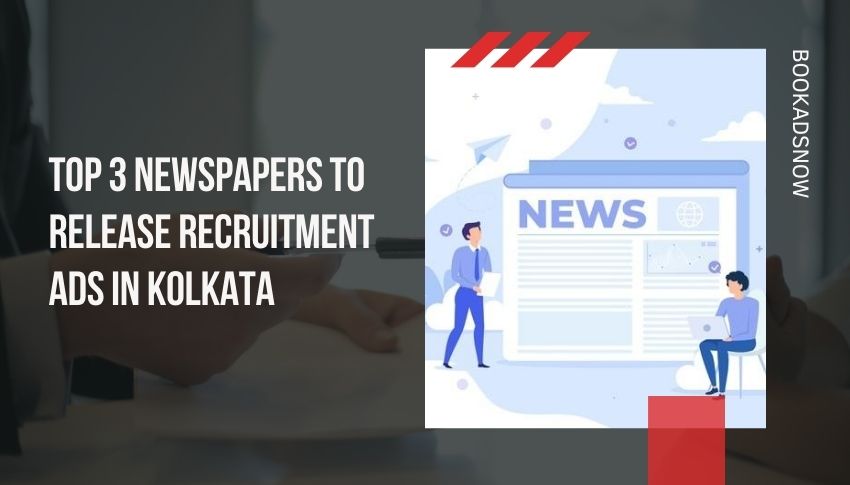 Recruitment ad is one such ad which is released in the newspaper, almost throughout the year. Organizations are always on the hunt for the right individual who will prove to be an asset, thereby leveraging the company's growth. Even though there are online job portals to help one to find his/her dream job, India is one such state where people still do not have smooth access to the internet. Thus, to reach out to the individuals residing in such regions along with other big cities, the importance of recruitment ads in a newspaper can never die.

Consider the fact that the practice of reading a newspaper is extremely popular among the Bengalis, it is always beneficial for the companies to release newspaper recruitment ads. Individuals from the Bengali community still look for such ads in the newspaper, as they happen to trust a newspaper advertisement over the digital portals. Hence, to reach out to the Bengali audience better, what are the top newspapers for releasing recruitment ads in Kolkata? Read to learn more.

Did You Know these are the Top 3 Newspapers to Release Recruitment Ads in Kolkata?

The Times of India is the most popular English daily across the nation. Bennett Coleman & Company owned publication, The Times of India is one those few newspapers which are popular among the youth as well as the senior citizens of the nation. Owing to its rich, engaging content, the newspaper has managed to capture a larger readership base, approximately 1.6 crores backed by a circulation of 2,640,770 copies daily. The newspaper alone enjoys a readership of 323000 in Kolkata which makes it one of the top 3 newspapers to release the Times of India recruitment ad.

Planning to release a recruitment ad in Kolkata and not releasing one in a Bengali newspaper? When it comes to engaging the Bengali audience via a newspaper advertisement, releasing one in a Bengali newspaper is a mandate and what can be better than Anandabazar Patrika? Anandabazar Patrika is the most popular Bengali daily in Kolkata with a huge readership base, unlike any other Bengali publication. The publication enjoys a total circulation of 1,075,057 copies daily backed by 6 million readership approximately. The widespread circulation of the newspaper in itself makes it a wise decision to release Ananbazar Patrika job advertisement to engage the Bengali audiences in Kolkata.

Hindustan Times is yet another popular name in the Indian media industry. A flagship brand of HT Media, Hindustan Times is a successful newspaper owing to its definition of hard work and dedication. It is, in fact, then second-largest newspaper with an approximate circulation of over 14 lakhs backed by a readership of 3.7 million in India. With one of its main editions in Kolkata, it is profitable for the companies to release Hindustan Times newspaper advertisement catering to jobs as it will successfully garner the attention of right candidates for a particular job role in an organization.

These are the top three newspapers to release recruitment ads in Kolkata. To make things simpler, you can contact Bookadsnow as our in-house media experts will help you at every step of releasing the ad. We will also provide you with the best newspaper recruitment ad rates in the market without compromising on your requirement.