While India is Watching TV, Here’s How You Can Monetize from This 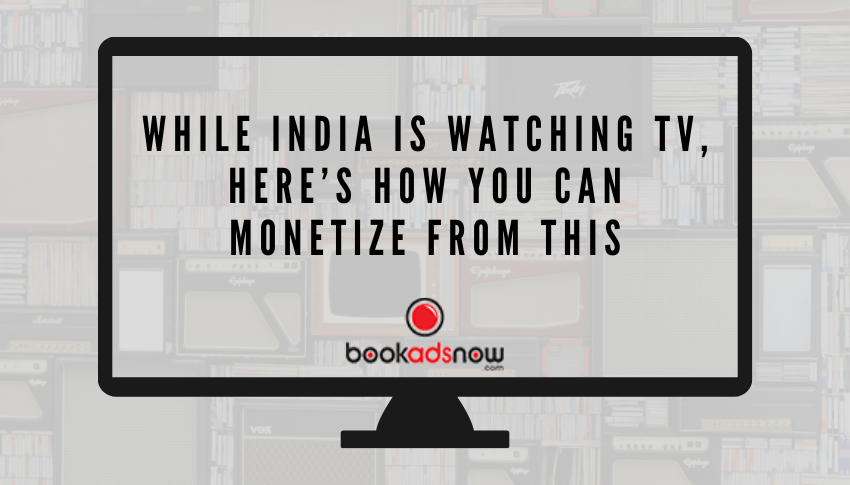 The implementation of the nation-wide lockdown has changed our way of life as we know it. Adapting to the new normal is a life where staying at home is perhaps the best thing we can do at this point. In trying to do so, television viewership has observed a hike of 11% to 622 million viewers between 21-27 March 2020 in contrast to the month of January’s 560 million (as per BARC statistics).

While the news genre had managed to control a staggering 21% of overall TV viewership, it has now come down to 15% as the definition of this newfound normalcy has found footing among audiences. On the other hand, the production of new content has come to a halt where major broadcasters such as Doordarshan are gaining with their popular reruns of hits such as Mahabharat and Ramayan. Another interesting trend that has come about it is the surge in popularity in kids channels as they now have a chance to experience the joys of staying at home amidst online classes.

Hence, it’s safe to say that television still continues to play a vital part in our daily existence where people are now watching TV for all seven days with an increase of 47% viewership.

How then to take advantage of these findings?

4 Simple Ways to Make the Most of Television Advertising

As an advertising channel, the influence and effect of television is second to none among all demographics and ages. It’s not surprising that all businesses, big and small, are trying to use television advertisements as a part of their marketing strategy. Being an audio-visual medium with an extensive reach and coverage, it is perhaps the best way to drive engagement and generate leads within a relatively shorter time.

Even with the tight TV ad rates in India, here’s how to make most of the medium.

Being a fleeting medium as far as the brand message is concerned, keep in mind that there is no substitute for good content. It is also advisable to hire a production crew to make your television advertisements stand out from the rest. Within a 30-second ad slot, how will you best engage with audiences that are constantly bombarded with brand messages on a regular basis? Remember, it is the content that will actually see you through.

2. Choose the right TV channel based on your TG

Every channel that you come across has a specific audience that it caters to. This could be with regards to age or even geographic locations. For example, products such as diapers will always be advertised primarily on channels such as Nickelodeon while others such as cement may be advertised in news channels. Once you have established your target audience for your television advertisement, the next step is to find the most effective place to air your advertisement.

3. Choose the correct slot for your advertisement

Even while you have identified your audience and the ideal channel, make sure that your commercials are aired at the right time. Using the correct ad slot is important since all your work of producing the ad and booking the ad slot becomes irrelevant if not viewed by your target group. Hence, identify the right time to air your content. For instance, you can reach young professionals by airing your commercials before or after standard work hours.

Wrap up the entire process with the selection of a television ad agency for the best TV ad rates in India for your respective slots. After all, money counts and you can save greatly when you make the right choice. With names such as Bookadsnow, you can count on their team of media experts to not only offer the best TV advertising rates in the market but also provide a wide range of benefits to businesses.

Here are the benefits of choosing Bookadsnow:

With over 30+ years of success in the sphere of TV advertising, Bookadsnow has emerged as the first solution when it comes to advertising as a whole.
Get the best for your advertising goals now with ease.