Why Do You Choose Times of India for Publishing Obituary Ads? 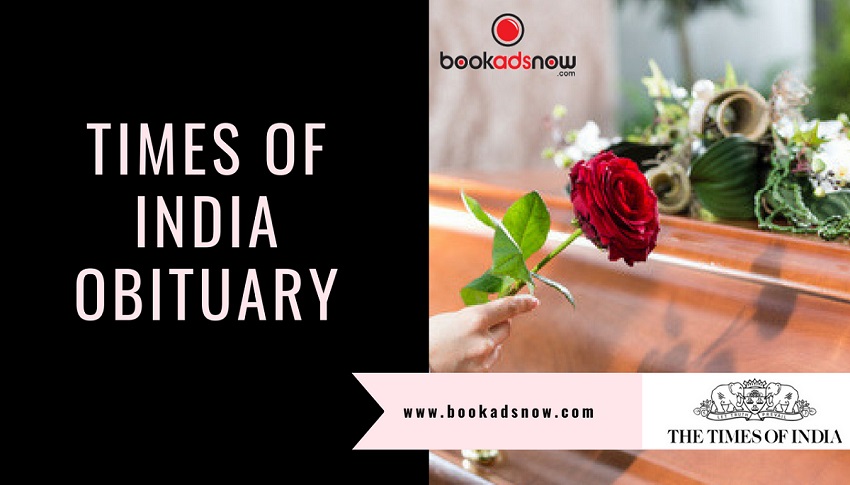 There are definite reasons that have enabled the Times of India to stand out among a huge crowd of publications in India.  Its exquisite journalism skill and quality news have allowed the newspaper to earn readers from all across the nation with an unmatched popularity. Dominating the media industry since 1838, under the ownership of Bennett, Coleman & Co. Ltd, TOI has a total readership of 1.3 crores with an unmatched circulation of 3,198,449 copies on a daily basis.

Unlike other types of newspaper Ads, obituary Ads are generally not pre-planned. Such uncertain situations of losing a close one can arise anytime; hence a newspaper should be able to publish obituary Ads even at the eleventh hour.

Does Times of India qualify in this aspect?

The publication has grown with the feature to take up Times of India obituary Ad booking even at the last moment. The organization consists of a group of skilled individuals who exactly knows how to help an individual during such situations, thereby enabling them to release Times of India obituary Ad without much hindrance. Hence, TOI does a complete justice to this aspect.

What are the Other Perks of releasing Times of India obituary Ad?

With TOI, an individual can release different types of obituary Ads as per their requirement. One can release obituary Ad for death announcement, death anniversary, condolence, bhog ceremony, Chauth uthala or uthama and commemoration havan.

Apart from that, TOI has an unmatched reach in the nation. We understand that we have mentioned this point before. However, to be more precise, the publication has editions at the important cities like Kolkata, Mumbai, Bangalore, Delhi, Chennai, Ahmedabad, Hyderabad, etc. along with editions in small cities as well.

Does the work of releasing an obituary Ad end with choosing a renowned publication?

A successful obituary Ad calls for picking up the right newspaper Ad agency who will help you at every step for releasing obituary Ads.

Given this fact, we can proudly claim that Bookadsnow will provide you with the best Times of India advertisement booking experience catering to any category.

To start with, we are an online media buying, releasing and planning portal who have given an edge to the concept of booking newspaper advertisements. You can now book newspaper Ads online within few simple steps from your comfort zone.

Benefits of Releasing Ads through Bookadsnow

Bookdasnow is present in the realm of the media industry for the past 30 years which has allowed us to create success stories for our client. Owing to our hard work and good customer reviews, we have earned the INS accreditation which has allowed us to maintain a strong connection with various media houses. Furthermore, Bookadsnow does not believe in maintaining a predefined card rate as we have grown with the ability to negotiate the Ad rates with publications on behalf of our clients.

Lastly, what completes Bookadsnow is a team of skilled employees who take the step to guide our clients through every step of book newspaper ads online, thereby enabling them to get the best out of their newspaper advertisement.

In case you wish to learn more about booking the Times of India obituary Ads, get in touch with us @ 9830400021 or drop us a mail at info@bookadsnow.com.

Why TOI is so effective for Publishing Obituary ads

How to Book Remembrance Ad in Times of India Online

How to Book Obituary ads in Times of India Newspaper