Book Advertisement in the Hindu Newspaper at the Lowest Cost 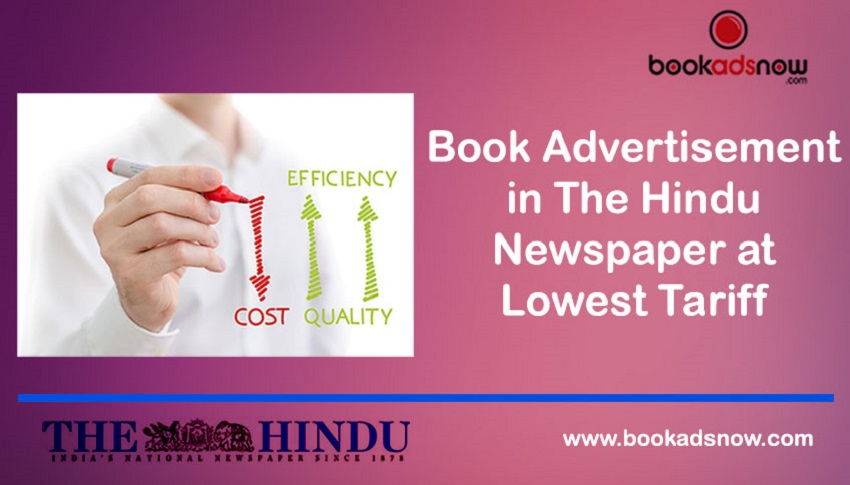 The Audit Bureau of Circulation (ABC) released a press release stating that the print industry was growing in India. This is contrary to the expectations of many where the digital age would wipe out other means of communication. The advent of literacy, easy access to newspapers, economic growth of the country and a couple of other reasons are why it seems that Newspapers are here to stay. This is great news for those of us who understand the value of the newspaper and its many facets, whether it’s the work of good journalists or the advertisements which give us their own unique information.

Popularity of the Hindu

The Hindu has long been acknowledged as one of the premiere newspapers of India. Born pre-independence, its history and name are known in every household of India. With a circulation of 1,216,118 daily and a readership of 37.7 lakhs, it has one of the largest reach of any English daily in India. The Hindu’s professional journalistic attitude which takes an objective stand while reporting in a balanced clinical manner encourages their readers to keep subscribing to them. The Hindu advertisement tariff is calculated so that the masses can connect to those they want. It’s a paper for the people by the people.

Supplements of the Hindu

As the Hindu has such a huge readership and circulation; any ad published in the paper will have the added advantage of benefiting from the credibility of the paper itself. The many supplements of the Hindu such as the

It enable you to reach a number of demographics - young or old, rich or poor. For the purposes of placing an ad via a newspaper advertisement agency, the many supplements will ensure that you get your message across to those you want.

Rates of Releasing Ads at the Hindu Newspaper

The policy of transparency followed by Bookadsnow ensures that the customer is always in the loop and is aware of every step that is taken. The tariff of a Hindu advertisement depends on the format, size, the type of ad, how long it is and a few other parameters. With the option of booking your ad online or of calling one of our in-house experts at Bookadsnow, the process of getting your ad in the paper has become extremely simple.

Benefits of Releasing the Hindu Ads with Bookadsnow

The benefits of choosing Bookadsnow are many. The bond between Bookadsnow and various media houses has been built and strengthened during the years of their continued association over 3 decades. This is doubly true for Bookadsnow’s relationship with the Hindu. Our media planning team is capable of handling anything you put on their plate thereby making your life easier and getting your job done. The INS Accreditation that Bookadsnow has earned speaks of the veracity of their claims, adding value to the brand name. Our experts will ensure that your ad gets the best placement as they know all the ins and outs of the trade. As has been mentioned above, Bookadsnow promises the best the Hindu advertisement tariffs that you will find in the market.

Whenever you need to place an ad in The Hindu look no further than Bookadsnow. For further information mail us info@bookadsnow.com could contact our experts via our website or call us directly @ 9830400021 and connect to them directly.

Benefits of Booking the Hindu Advertisement

How to Book Ad in the Hindu Newspaper

How to Book Obituary ads in the Hindu