Reasons for Releasing Newspaper Ads in the Times of India 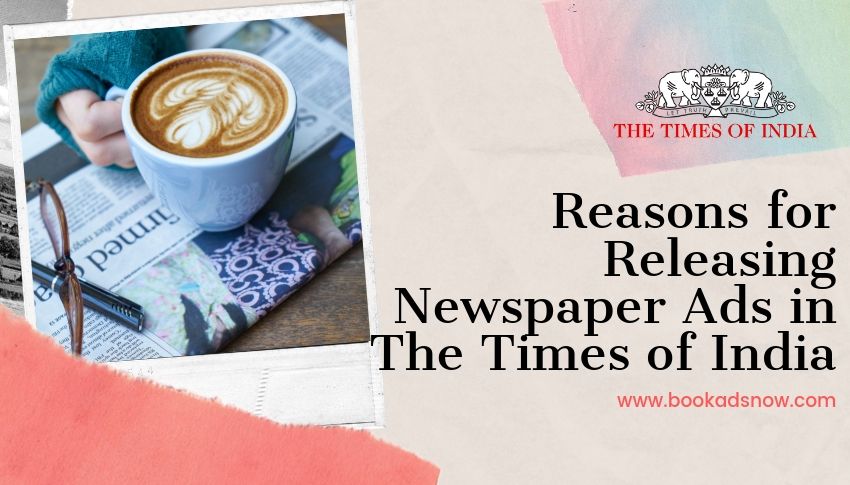 Why you, as an advertiser, should indulge in releasing Times of India advertisement? That's exactly what we will deal in this blog.

To start with, newspaper advertisements were believed to be dead by 2019. However, as we see it, the trick is still working to attract potential customers, which is why brands/businesses still indulge in this business promotion strategy. However, with the entrance of various digital platforms, successfully executing a newspaper advertisement leading to a better ROI has become a challenge. You have to make sure to choose a publication that enjoys a healthy circulation and readership backed by a plethora of editions. Hence, keeping these pointers in mind, the Times of India is the best publication for releasing newspaper Ads.

Times of India Advertisement- The Perks

Times of India is not just a mere publication, it is a legacy which started as early as 1838 under the ownership of Bennett, Coleman & Co. Ltd. It is a brand which shines bright in the media industry impeccable journalistic adroitness and up-to-date news, thereby quenching your thirst for information. Apart from that, here's why you should release Ads in the Times of India.

Hence, these factors make it mandatory for brands/businesses to opt TOI for releasing a newspaper advertisement if they are seeking to garner a healthy viewership and better ROI.

How to indulge in One without wasting Time & Money?