Public Notice Ads: Questions You Need to Ask Before Booking One 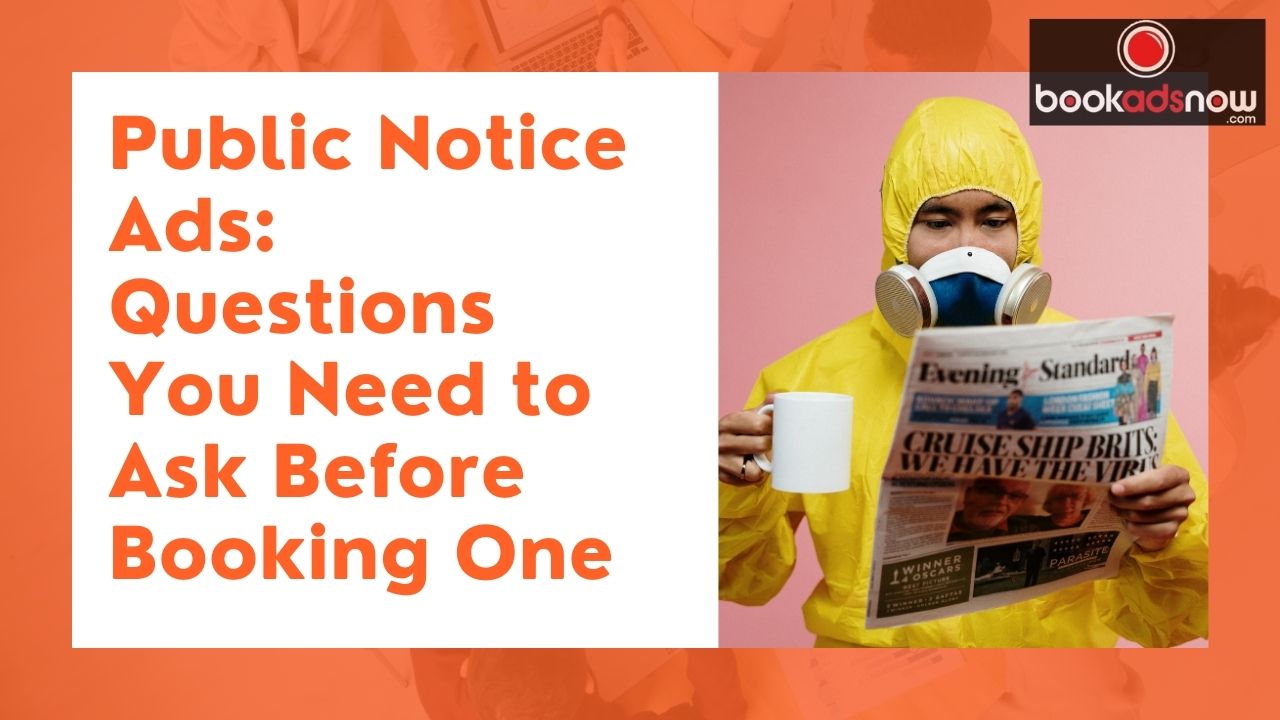 A newspaper advertisement has always stood as a great way to build the popularity and reputation of businesses. Bringing reach, visibility and better response – they have been vital in the media strategies for decades! However, some ads only seek to inform and educate and not necessarily promote. A classic example of this is a public notice ad.

All ads are purpose-driven – something we all know. For instance, matrimonial ads are intended to find suitable and prospective life partners. Recruitment ads are released with the intention of gathering the best talent in case of opportunities and vacancies. But on the contrary, a public notice ad in newspaper seeks to keep communities informed about the changes going on.

What is the main reason behind releasing public notices?

There are a series of important and official announcements that concern public interest. This could vary across a variety of topics – new government schemes, updates in a public/private sector organization, property deals and ownership disputes, etc. This varies across matter such as court hearings and the absence of nomination after the death of a parent.

To sum it all up, this kind of notice advertisement spreads awareness about new updates taking place in communities as well as governmental activities. It also spreads to include legal, economic and environmental concerns which are of relevance.

What newspaper should a public notice ad be released in?

Since it is important for general important information, a public notice advertisement through an ad agency should be placed in a newspaper that has a strong circulation and reach. It should have higher chances of being seen, especially by those individuals who are bound to be affected by it. Names like the Times of India and Dainik Jagran should definitely be of help owing to their widespread popularity across the nation.

What is the difference between a regular ad and a public notice ad in newspaper?

The main difference between a public notice ad and the others is the basic intention behind releasing it. While it does not seek to generate leads, enhance sales or promote brand awareness, this type of newspaper ad has no ‘call to action’ – it’s all about keeping the public up to date with matters of importance to the general public. However, some may also encourage individuals to take part in a hearing or meeting centred around a crucial issue.

How do I release a public notice advertisement easily?

It may be difficult for many to release a public notice ad in newspaper since most are not aware of the procedure and are not sure about which agency to trust. That’s where Bookadsnow comes into the picture. Being in the newspaper advertising scenario for 30+ years, it has won the trust of countless when it comes to releasing newspaper ads with ease.

Providing the best rates as well as end to end assistance, you will definitely get the best for your public notice ads with Bookadsnow. For any inquiries, visit our website or get in touch with us today!