Did You Know These Myths About TV Advertisement? 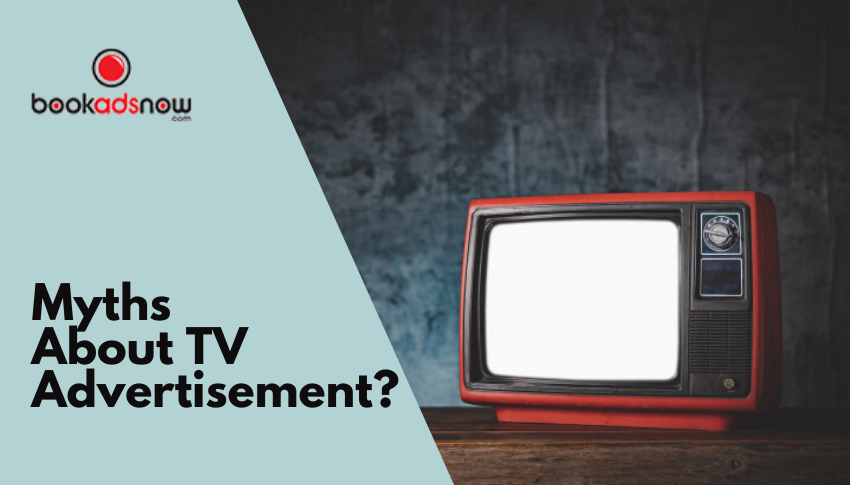 Are you of the opinion that television ads fail to generate a good ROI? Do you feel people in this era have forgotten to watch TV? Are television ads even working as expected? In this blog, let us go through the myths we are surrounded with about television advertisements to hold up the truth in front of you.

#MYTH 1: Commercial TV advertising is in a state of termination.

#FACT: Contrary to what it was believed by the doom-mongers, the viewing figures of the TV channels have improved in India, especially within the lockdown period. As per the BARC report, the average daily reach of the channels grew from 520 million to 622 million since the lockdown has started. This means that there are 622 million viewers watching TV regularly for a period of 4 hrs and 40 minutes. It, in turn, has changed the percentage reach of television advertisement which is now reaching 80% of the total viewers. Hence, from here we can gather that TV advertising is not sinking, at least in the next 15 years.

#MYTH 2: TV advertising does not generate a good ROI

#FACT: What makes TV advertising popular even today if it is unresponsive backed by no profit? Advertisers, brands or businesses are not fools to spend a lump sum amount for an activity whose end result will leave them earning nothing. Any brand or business, upon asking the benefits of TV advertising, will come up with the prompt answer- ‘responsive’. It is because a TV advertisement has the power to stir us emotionally along with highlighting the ethos of a brand, businesses spend an exorbitant amount on one, thereby earning a better ROI. This form of advertisement is the final deciding factor for the buyers when it comes to purchasing a particular product or a service which ultimately becomes the profit gearing machine for a brand.

#FACT: In today's world, the working class is too busy to watch videos for a prolonged period on phones and tablets. Also, they happen to spend hardly a few minutes on any social media platform, thereby neither engaging with the content nor the ads appearing on these platforms. Plus, the sudden pop-up of an advertisement while watching a video on such platforms only leaves the viewer irritated, thereby giving rise to a negative response. On the contrary, while watching any TV show, we tend to watch the show attentively. We are also mentally prepared for the ads to come up, thereby hardly giving rise to any negative response. Hence, the power of the television advertisement is nothing compared to ones played on digital platforms.

#MYTH 4: Brands fail to promote themselves effectively via TV advertising

#FACT: In reality, television advertising helps brands and businesses to promote their products or services through enough creativity. TV advertisements can be defined as the perfect blend between sound and visuals to build a convincing storyline. This enables the brands to reflect light on the ethos of their business which ultimately leads to garnering the attention of the targeted viewers.

#FACT: The new generation has taken a liking to watch television content with enthusiasm. In fact, the age group of 18-34 years, watch TV for almost 3 hours per day. Research says that it is more than spending time on eating, doing shopping and browsing through social media platforms combined.

And hence, we have busted the myth catering to TV advertisements. Of course, care should be taken to come up with an excellent storyline for your television advertisement. It must touch the emotional corners of the viewers and help them relate with the same, thereby compelling them to purchase the product or the service.