Why Businesses Should Release an Ad on Aaj Tak during the Lockdown Period? 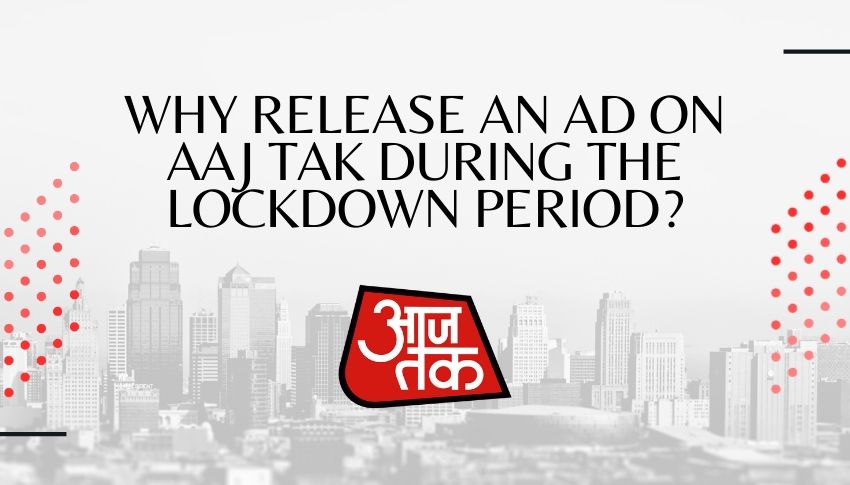 The sudden strike of coronavirus has taken a toll on our health, regular activities and majorly the economy of various countries. With that being said, India is one of those countries where the pandemic has taken a serious leap. With the quest to stop the virus from spreading, the government of the nation has called a lockdown in all the states, thereby putting the nation in a standstill position. This step has also slowed down the nation's economic growth as most of the firms and organizations have stopped working with a very few operating from home. Hence, in this, how can brands/businesses make their presence felt among their trusted customers?

While the circulation of newspapers has declined to a large scale, the viewership of TV channels since the lockdown has seen a boom. With everyone in their home and having not much to do, Indian households are turning to TV channels to watch old TV shows hitting nostalgia. Not just that, the viewership of news channels have also increased as people want to stay updated about the current situation. Hence, with this silver lining, businesses are making sure to release television ads to reach their target audience. However, what makes Aaj Tak one of the best news channels to release an ad? Here are the reasons.

Do you Know these Numbers Signifying the Success of the Channel?

Let's start analysing the position of the channel since the lockdown started.

From week 12 of 2020, a nationwide lockdown was announced by the government of India. In the 12th week of 2020, Aaj Tak news channel recorded an impression of 654000. This is 361% more than week 9 when the lockdown was not officially announced. The channel's gross impression by the end of week 12 touched a massive 532102000 impressions, thereby making it the top Hindi news channel in the nation. It garnered 56% more viewership than its competitors, thereby encouraging businesses to release an advertisement on Aaj Tak. What's more? Aaj Tak enjoys a viewership share of 25% among the top 5 Hindi News Channels.

The channel had also topped the chart with a reach of 23.8 crores in week 12. In fact, the average growth in reach from week 9 to week 12 was high by a massive 115%, more than any other Hindi news channel. It's week 14 and the channel is still securing its top position by 372688000 impressions. Hence, from these numbers, one can easily say that choosing to release an Aaj Tak advertisement during the lockdown period will leave any brand with short-term and long-term benefits.

With its launch on 31st December 2000, Aaj Tak has continued to dominate the Hindi genre of media space with the highest viewership, reach and impressions week after week. Defined by the tagline ‘Khabar Matlab Aaj Tak’, the channel has made sure to live up to its claim by putting forward an excellent performance owing to unmatched journalism skills. With impressive insights into regional, national and international affairs, the channel has grown with each passing day, thereby, becoming the most popular Hindi news channel in the nation. An ideal platform for B2B & B2C sectors of the industries, an Aaj Tak advertisement is known to drive sales for the advertisers in the nation.

Further, to receive the best Aaj Tak advertisement rates and to play your during the prime time slot, get your ad released by Bookadsnow- an ad agency in Kolkata. To know more about Bookadsnow and Aaj Tak advertising rate, send us a mail at info@bookadsnow.com or call us at 9830400021.