Did You Know Polimer News is the Best Tamil Channel to Book TV Ads? 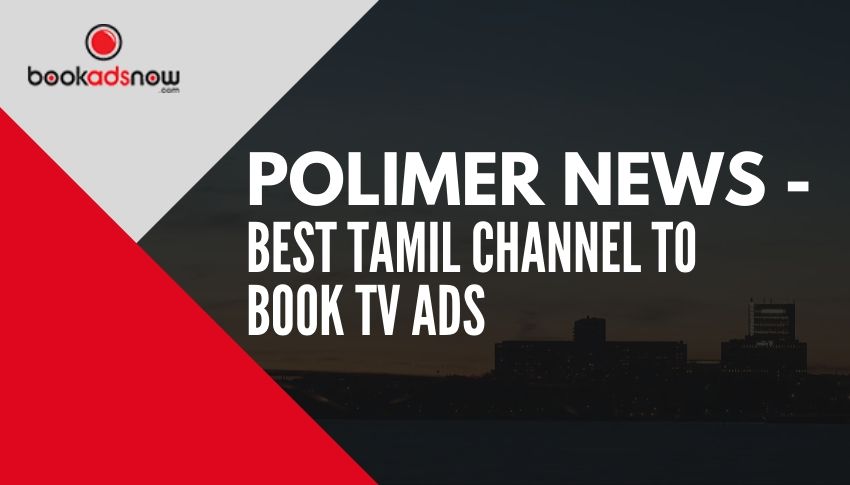 Lockdown or no lockdown, brands and businesses have made sure to continue with releasing TV ads, thereby reaching their target audience to reach their set goals. Thanks to the change in TV viewership trends that have been recognised since the beginning of the lockdown. Garnering a humongous 197 million views, it has proved to be even more than most-viewed IPL games of 137 million. As per BARC statistics, the average daily reach grew from 520 million to 622 million, hence implying that there are 622 million viewers watching TV regularly for a period of 4 hrs and 40 minutes.

Kerala and Tamil Nadu are experiencing huge growth in TV viewership, thereby enabling brands/businesses to reach their audiences via TV advertisement. Currently, a channel in Tamil Nadu is garnering a healthy viewership and is recording a good reach, thereby making it the best platform for releasing television advertisements. Wondering what the channel is? Here it is.

Polimer TV, a Tamil Entertainment channel, was launched in 1985 by Kalyana Sundaram. Based in Chennai, the channel is a flagship brand of Polimer Media Pvt. The channel was initially launched as a local TV station in Salem which was available upon subscription only. However, with the rising popularity of the channel, it later changed into an entertainment network and expanded its coverage area to the whole State of Tamil Nadu. They also have a sister channel namely Polimer News TV.

Polimer TV enjoys a viewership of 42,052000 weekly, thereby highlighting its popularity. It's sister channel, Polimer News, has experienced the highest impression in week 17 2020 reaching a number as high as 123645000 impressions. Hence, from these statistics, you can fathom that the channel enjoys unmatched popularity in Tamil Nadu and Pondicherry, thereby making it apt to release TV ads in Polimer News to reach the target audience.

Choose Bookadsnow to release Polimer News TV advertisements online within a few simple steps. All you need is access to the internet and you can release Ads via us in a simple manner from your comfort zone. We will also provide you with the best Polimer News TV ad rates after negotiating the same with the channel on your behalf to grab the best deal for you. Additionally, get access to services like:

To release Polimer News TV ads within a few easy steps, mail us at info@bookadsnow.com or call us at 9830400021.