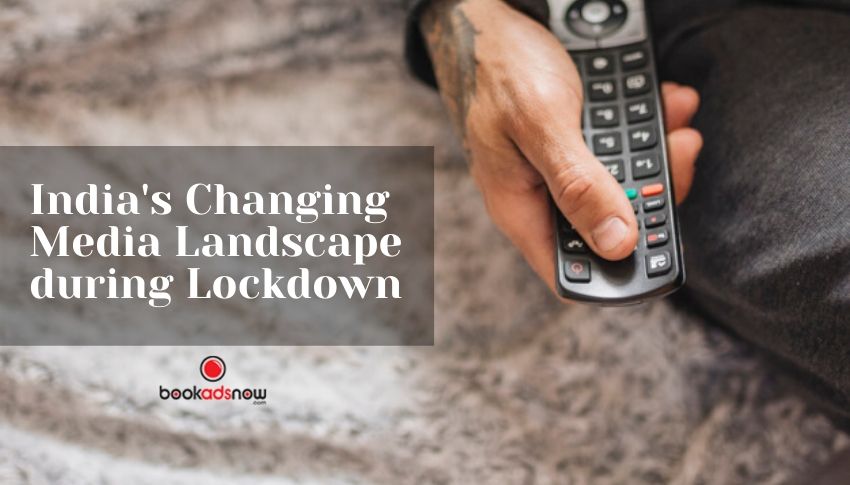 COVID-19, or Coronavirus as it is popularly called, is a pandemic that no one saw coming. Creating a paradigm shift in our day to day existence, the entire world is feeling the effects in all aspects of life. As we’re pushed to practice social distancing and home quarantine, certain habits have willed their way into existence and have become a regular part of life.

The most obvious of them all would be an unprecedented rise in screen time. While many are stuck at home, social media and increased digital activity were largely expected. News channels such as Aaj Tak and ABP News have also become ideal for advertisements due to their increase in popularity. However, there were many such changes in the entire media landscape that took us by surprise.

One such example is the resurgence of DD’s classics such as Buniyad and Mahabharata that is a major success. Other changes involve the use of ‘Live’ functions in social media apps that were not as popular before. TikTok has also seen a significant rise in usage. With new patterns emerging one after the other, let us dive deeper and see what changes have come into play.

Television stood to gain during this time owing to its captive audience. The statistics revealed the highest ever TV viewing at 1.20 trillion minutes with 622 mn viewers watching TV daily for 4 hrs 40 minutes. However, not all channels stand to gain. Sports and GEC’s have suffered, giving that games are cancelled and production activities have been postponed. On the contrary, news channels such as the ABP News channel and Zee News channel have gained from this since timely, authentic information is the need of the hour.

Here are a few noticeable changes in terms of TV media consumption.

Staying at home has led to the need for staying connected. Many are isolated from their loved ones and hence, digital media strives to bridge this gap. As per BARC reports, the time spent on smartphones has increased by almost 3 hours per week during COVID disruption. Whether a TikTok challenge or a live home workout by influencers, digital is now the only way that fosters interactivity with audiences.

Here are a few key trends that have come into existence.

Seen in the perspective of a near-obsolete medium, radio has shown a significant increase in listening time during the nationwide lockdown. Based on a study involving the top six metros in India, it was seen that this time jumped by 23% to 2.36 hours during the lockdown. Surprisingly, this is only second to television. People have renewed their faith in the medium as seen from the figures stated below.

Here are a few vital insights that can be seen in the context of radio.

Quarantine and social distancing have become terms that are now known to all. What many are not aware of are the trends that they are actively shaping. Due to the lockdown, fresh and novel ways have come about to get through this difficult time. On the other hand, there are many who are using this time to their advantage. Whether it’s learning new skills or finally catching up with family, it is a time that has truly made us appreciate the things that we have.

Let’s make the most of this time together.