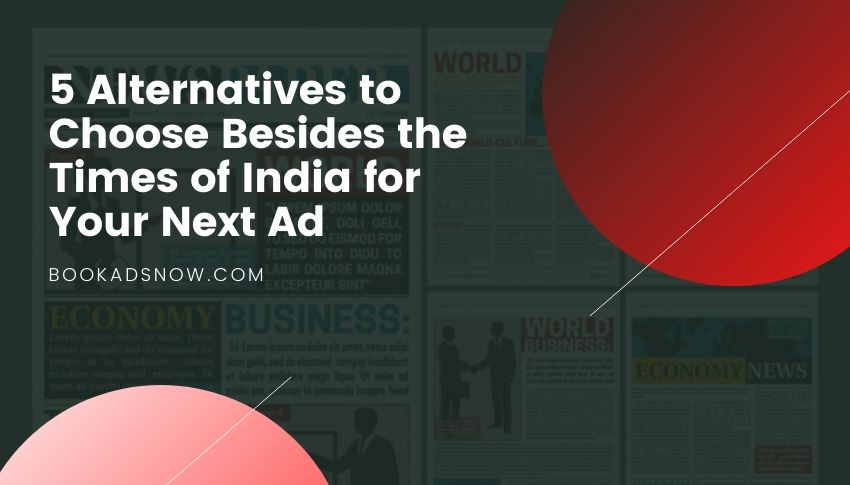 The most effective and efficient way to reach your target audience is through a newspaper advertisement. Even in this day and age, print is still king. Thanks to its profound credibility, wide reach and flexibility as a medium, brands and businesses continue to leverage this newspaper as a part of their marketing strategy.

In this regard, the Times of India stands out from the crowd as the most lucrative vehicle for both national as well as local newspaper advertising. In fact, the statistics say it all. Q1 of 2019 records a daily circulation of 3,198,449 copies along with a readership figure that stands at 15.2 million. Being a top-rated English newspaper, it’s not surprising that it is the most sought-after publication for advertising purposes.

However, this does not mean that others become irrelevant.

Listed below are a few newspapers that are sure to help you with your advertising journey.

From ‘Subah Savere’ to ‘Good Morning India’ to ‘Bhaskar Samachar’, the name Dainik Bhaskar was officially coined in 1958. While Bhaskar means ‘The Rising Sun" in English, its graphic of the same seeks to represent a bright future. Launched in 1948, this newspaper has climbed its way to the top as one of the largest circulated daily in India with a stunning total readership of 5,14,05,000 and an AIR of 1,53,95,000 (Q1 of 2019). Hence, a Dainik Bhaskar advertisement is truly a great alternative when it comes to newspaper ads.

Undoubtedly the largest circulating newspaper in Kerala, Malayala Manorama is a great option when it comes to reaching audiences in the south. It was first published as weekly in 1890 and now, it boasts a total readership of 1,74,77,000 and an AIR of 97,58,000 (as of Q1, 2019). This is a Malayalam newspaper that is owned by Malayala Manorama Company Limited. Clearly, this publication deserves a spot when it comes to newspaper advertising and effective results.

Perhaps the only financial newspaper to find itself on the list, the Economic Times has proven to be a great medium for advertising purposes. Also published by Bennett, Coleman & Co. Ltd., it has a total readership of 37,01,000 along with an AIR of 9,83,000. Started in the year 1961, this English language newspaper covers topics such as international finance, share prices and other such aspects of the Indian economy.

A strong preference when it comes to an advertisement in an English newspaper, Hindustan Times is a flagship publication of HT Media that finds favour in cities such as Delhi-NCR and Mumbai. Did you know that this newspaper was inaugurated by Mahatma Gandhi in 1924 while also playing an integral part in the independence movement? While its roots are steeped in a rich culture, its popularity and preference as a daily can be seen from its total of 3.39 million readers.

This Hindi language newspaper easily finds its way amongst the top 10 newspapers based on readership and circulation rates. Owned by Jagran Prakashan Limited, Dainik Jagran was founded in 1942 and is also an ideal medium when it comes to advertising goals. This newspaper displays an impressive total readership of 7,36,73,000 along with an AIR of 20,258 (as per Q1 figures of 2019).

Releasing ads in newspapers such as these are sure to help fulfil your advertising needs. Whether reaching your target audiences or increasing brand awareness, choosing one of these newspapers will definitely help your business down the line. To get the best rates for your newspaper advertisements, turn to Bookadsnow and enjoy several benefits when it comes to releasing your advertisements.

Any type of newspaper ad, any publication, any part of India – there’s no better option than Bookadsnow.