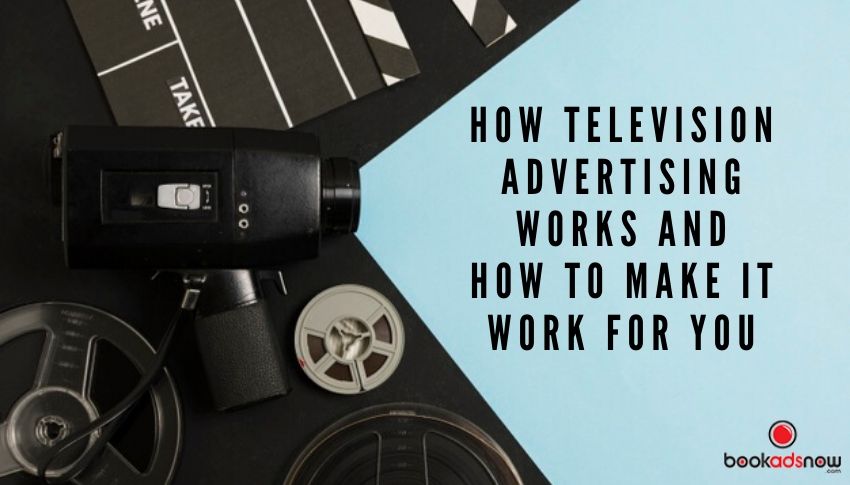 Did you know that people spend roughly 4 and half hours daily in front of their television sets? Being one of the most effective forms of communication, television makes for an excellent tool when it comes to advertising. Unlike other mediums, the combined action, sound and dialogue make it impactful option in comparison to radio and newspapers.

Hence, it’s not surprising that every company or brand wishes to use this medium for their products/services. The bad news is that despite its incredible reach and visibility, the TV ad cost makes it a relatively expensive media to choose. As a result, advertisers must make the most of their 60-second ads keeping their messages and target audience in mind.

Small businesses can counter the budget-related problems with smart planning for the best spots. However, the only way to do so is to have a clear idea of how the television advertising industry functions. Given below is a short guide on how to advertise on TV.

All You Need to Know About Television Advertising

As far as the workflow is concerned, the entire process begins with the brand and its respective product/ service. This has to be appealing and worth advertising to a larger audience. Based on their preferred communication, brands tend to TV advertising agencies for the creation of an ad. This includes scripting, finding appropriate talent, shooting and post-production.

The next step is to go ahead and buy TV spots. This happens once the ad is created and takes place with the help of a media agency. Ads normally run as 30 or 60-second spots. Of course, you should have an idea of key factors such as target audience, length of TVC and preferred time of airing before doing so. On the basis of this, you can discuss media buying opportunities and have your campaign launched on television.

Remember, a TV ad cost will vary based on the advertising agency you choose.

How to make it work for you

This depends on many factors. For instance, the type of audience that uses your product. A typical example would be Horlicks or Bourn Vita that is generally advertised in kids channels such as Pogo and Cartoon Network. You could also keep a track of your competitor’s activity for an added advantage. At the same time, ensure that the channel itself ranks high in viewership numbers to capture a larger audience with your advertisement.

News channels are watched by individuals preferably in the early parts of the day since they like to be aware of key happenings before stepping outside. Or even a morning ritual with breakfast. Whichever the case, audiences have certain behavioural patterns that should be comprehended before airing an ad. Once you learn the most effective time that your target audience is most engaged, choose one of the popular TV advertising agencies and make the most of your spot.

Thanks to the enormous scale and reach of television, ads can reach virtually any type of audience. Whether male or female, older or younger, there is plenty of scope for targeting the right audience with the right buy. It is also possible to target audiences (local, regional or national) based on their geographical locations. Hence, your TV ad needs to match the demographics of the program’s viewers to the product’s market with minimum spends.

Sometimes it’s not about how often you air the ad. Sometimes it’s not about the channel you choose as well. There is just no substitute for good content. If an ad plays on the emotional strings of its intended audience, it would be seen as an instant success. Since every second counts, you don’t have long to grab the attention of viewers. An ad must stand out from the clutter and engage as per the objective – to convince, inform, entertain, humour, etc.

Keeping these in mind, take advantage of TV’s multi-sensory features and heighten the connection with audiences using action, dialogue and music. You need to make a compelling impact with a fleeting message while achieving communication goals. So ask yourself three things – Who is my target group? What channels and TV shows do they watch? How do I make my ad impactful?

Using the services of online portals such as Bookadsnow can help to book your spots at a lower TV ad cost thereafter. Offering a TV ad monitoring report, you can get information based on spot placement, number of spots in the ad break while ensuring that your ads don’t play in the same ad break. You can also track competitor activity if needed. Similarly, its prestigious AAAI membership makes it a top choice for advertisers today.

Hence, enjoy the benefits of TV advertising with Bookadsnow.