Choose the No.1 English Daily to Expand Your Business in Bangalore 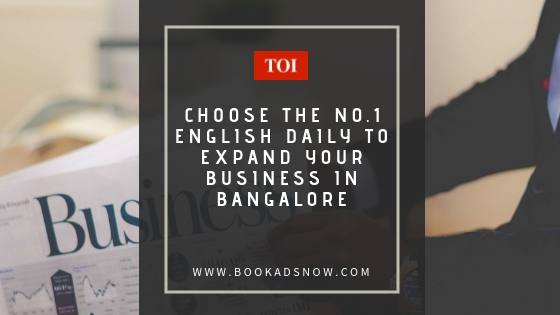 For a publication to earn name and fame in the media industry, it needs to work hard enough to provide the readers with the latest news updates written in crisp yet lucid language. Furthermore, the information presented should be accurate, thereby providing the readers with the actual fact rather than putting them in a fallacious position.

Even though India is a land of newspapers, not every publication will work the same way. Only the best ones are bestowed with the skill and dedication to present the best edit of the events going around the world. And in this regard, The Times of India stands out of all the publications.

Why TOI of all the English Dailies in the Nation?

A flagship brand of the Times Group or Benett, Coleman & Co. Ltd, the publication enjoys an unbeatable circulation and readership across the nation.  What's more? World's biggest English daily just got a step bigger. The Times of India has recorded an overwhelming growth of 17% on an already massive readership base. It has added 2.2 million or 17% total readership, taking it to 15.2 million in the first quarter of 2019 from 13 million in the same period of 2017.

According to the latest findings of IRS (Indian Readership Survey) by Media Research Users Council, TOI is bigger than other English dailies in the nation by a comfortable margin. Hindu, Indian Express, New Indian Express, Tribune, Telegraph, and Deccan Chronicle add up to 14.6 million combined compared to TOI 15.2 million readerships alone. This sheer dominance of TOI is also emphasized by its growth of 2.2 million readers which is larger than the other six broadsheets combined.

That's not where the power of the publication ends!

TOI has grown nearly by 9% in the South whereas The Hindu has experienced a declined by 3.7%. TOI's AIR in South India 11.52 lakhs, thereby making it a market leader in the South, ahead of The Hindu's 9.97 lakh.

Hence such statistics backed by its robust growth in South India makes it inevitable for the advertisers to release the Times of India advertisement in Bangalore. A cosmopolitan city in itself, business/brands make sure to hit the city to garner the attention of the readers coming from various cultural backgrounds with distinctive interest. Since, the city boasts a healthy number of English speakers, advertisement in English newspaper about a product/service is profitable in every way. Brands can expect a healthy viewership and ROI, thereby reaching their goal of advertising strategy. Hence, tapping upon Times of India advertisement in Bangalore is a smart move that any brand can take.

Furthermore, as an advertiser, you can simplify the task by hiring a newspaper advertising agency in Bangalore who will guide you at every step of booking Ads, thereby making it quicker for you. However, for your Times of India advertisement, if you want something more than guidance, Bookadsnow is here to help you with the same.

An online platform for booking newspaper Ads, Bookadsnow maintains a healthy relationship every media house across the nation. Our 30+ years of experience along with INS accreditation plays a prominent role in this regard. Also, at Bookadsnow, we do not display the Ad rates beforehand. We negotiate the same with the publication house and provide you with the best rate in the market. Apart from that, our in-house media team consists of skilled individuals who will guide you at every step of releasing the Times of India advertisement along with providing you the best Ad placement that will work for the betterment of your business. Hence, you can safely reach out to Bookadsnow for releasing Ad in TOI seamlessly which probably no other newspaper advertising agency in Bangalore will be able to provide.

TOI has proved itself as a publication and a brand, the catalyst in dynamiting the growth in English literacy, thereby resulting in a huge readership of English publications. The readership of English dailies has increased by 10.7%, from 2.8 crores in 2017 to 3.1 crores in 2019 Q1, as per the IRS data. Hence, advertisements in English newspapers, that too in one like The Times of India, will always keep brands/businesses in a good position and can never go wrong.