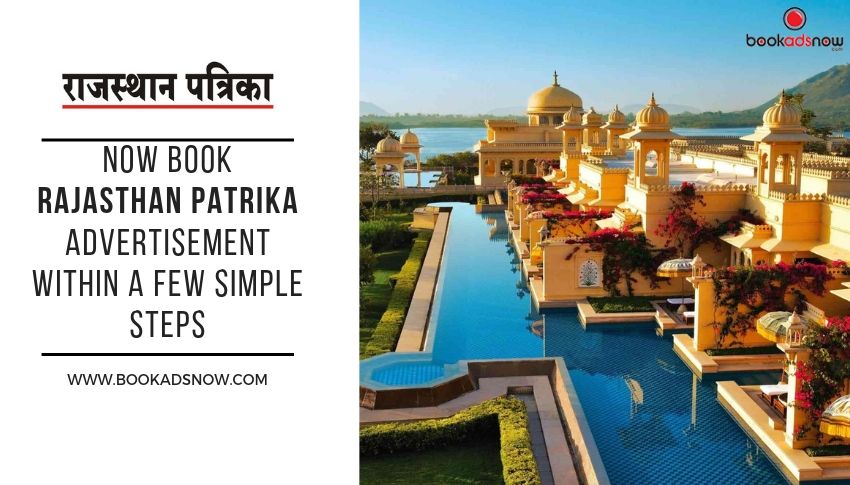 If you are worried about going through the tedious steps involved in booking the Rajasthan Patrika advertisement, we have the perfect solution for you. However, we delve into the solution, let us take a short trip down the lane of Rajsthan Patrika publication.

To begin with, Hindi holds a prominent place in our day to day lives. It is one language that is used across the nation and beyond, thereby inculcating its significance among the mass. Hindi is a widely spoken language in India with 55,14,16,518 total number of speakers out of which 42,20,48,642 using Hindi as their first language. This is 41.03% of the total population. Hence, releasing advertisement in Hindi newspaper is imperative among the Indian advertisers. In this regard, releasing Ad in Rajasthan Patrika is a wise decision. Why? Here are the reasons.

Hence, such compelling reasons push the advertisers to indulge in releasing Rajasthan Patrika advertisement, thereby helping them to reach the target audience in no time along with earning a healthy ROI.

Now, coming back to the main question, "how to release advertisement in Rajasthan Patrika quickly?"

We understand time is precious and it is one thing nobody wants to waste. Hence, to make things easier for the advertisers, we have come up with Bookadsnow- a platform for releasing newspaper Ads online. Through Bookadsnow, you can wrap up the concerned task within a few steps and you can do so from your comfort zone (which can be anywhere around the world). All you need is access to the internet.

But Why Bookadsnow of All?

30+ Years of Experience- which allows to be well acquainted with the nitty-gritty of the advertisement world.

INS Accreditation- it adds to our brand credibility and also encourages the brands and media houses to trust us.

Media Houses Across the Nation- we work with every media house across the nation, thereby providing the advertisers an array of options to release newspaper Ads.

We Provide the Best Ad Rate- which is why we do not display the card rate unlike other Ad agencies. We negotiate the same with the publication in concern to provide the best Ad rate in the market.

A Skilled In-house Media Team- who will guide you at every step of releasing advertisement in Rajasthan patrika or any other publication. Not just that, they will suggest you the best Ad placement that will provide you with an enhanced viewership.

Hence, now book newspaper Ads online through Bookadsnow without any hindrance. Be it Rajasthan Patrika or any other newspaper of your choice, we will help you at every step and maintain transparency to avoid any confusion.

To learn more about the online portal and the steps involved in booking Rajasthan Patrika advertisement, browse through their official website, drop them a mail at info@bookadsnow.com or call them @ 9830400021.