How to Book Obituary Ads in TOI at an Affordable Rate? 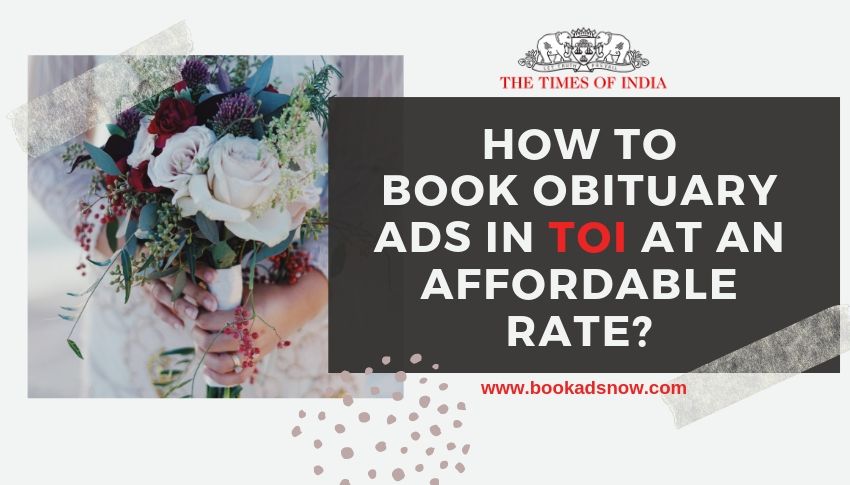 If you are seeking to book an obituary ad in Times of India at best rates, this blog is your bible. However, before we delve into this subject, let us gain some knowledge about obituary Ads.

What are Obituary Ads?

Obituary Ads are published to notify friends, family, and associates about the sudden death of a beloved along with providing them with details of the upcoming funeral. A memorial advertisement is released yearly or half yearly based on the customs and beliefs of the families. These are meant for the commemoration of a deceased.

Hence, to make the process of informing others about the deceased faster, it is essential to tap on a newspaper with a widespread circulation, plethora of editions and great readership. With these pointers in mind, the Times of India is the apt newspaper to release obituary Ads.

Why TOI of all the Publications?

Hence, owing to such features, releasing obituary advertisement in newspapers like the TOI is a worthwhile decision that will meet the requirement of the advertiser or the individual.

However, the task does not end with choosing the right newspaper, especially if you want to receive the best rate for your advertisement in English newspaper. For that, you have to hire a skilled newspaper advertising agency who will not only provide you with the best rate but also guide you with releasing Ads in the newspaper.  In this regard, Bookadsnow stands out the best Ad agency in India. Why? Here are the reasons.

Bookadsnow- Your One Stop Solution to Booking Newspaper Ads

Hence, Bookadsnow will take care of all the difficulties catering to releasing Ads in an English newspaper along with providing you with the best Ad rate in the market. To learn more about releasing obituary Ad in Times of India, get in touch with us @ 9830400021 or drop us a mail at info@bookadsnow.com.