Did You Know these are the Best Newspapers to Release Display Classified Ads? 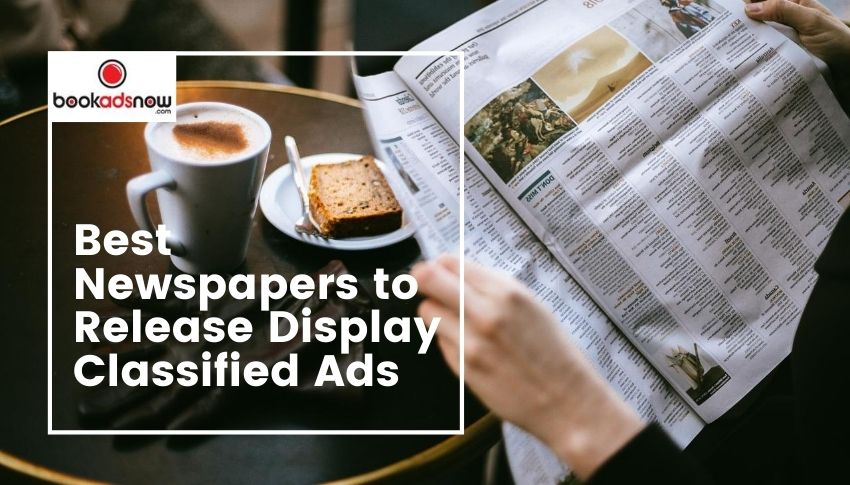 Before we delve into the top 3 newspapers that will provide you with great results for your display classified ads, let us first define the definition and purpose of releasing display advertisements.

What are Display Advertisements?

Display advertisement is a type of newspaper that is mainly released by brands to engage their target audiences. A display classified ad is designed using high-resolution images (coloured or black & white) with minimal text, thereby making a lasting impression in the minds of the newspaper readers or viewers.

As we have mentioned earlier, brands release display classified ads in newspapers to engage the readers, foster a better brand recall or make a lasting impression. Readers tend to remember elements like pictures and an engaging one-liner better rather than an ad defined by texts. In fact, display classified ads are extremely popular among businesses across various industries as they give a better result, thereby providing a better ROI. Proper insertion of CTA makes such ads click extremely well among the readers.

It goes without saying that The Times of India is one (or probably the one) of the best newspapers in our nation. An English daily established as early as 1838, the newspaper has made sure to live up to the expectation of the readers with each passing year. Hailed as one of the most popular newspapers in the nation, it enjoys an approx. readership of 15.2 million+ backed by an unbeatable circulation of 3,198,449 copies daily. Owning to such promising numbers, the Times of India advertisement is indispensable among the brands & businesses. And when it comes to releasing display classified ads in TOI, the demand is incredible among the advertisers as such ads in TOI helps the brands to reach their target audience successfully, thereby helping them to 2x more ROI.

Dainik Jagran is the flagship brand of Jagran Prakashan Ltd (JPL) - a leading media house in India. Since 1942, the publication stood out as the best Hindi publication and has earned 5.59 cr readers across the nation owing to its hard work and dedication. Its popularity among the brands and businesses is undeniable, thereby making it imperative to book Dainik Jagran advertisements for achieving better ad viewership and earning a better ROI. The publication has 37 editions across 11 states backed by the circulation of 3,632,383 copies per day. Can there be a better publication for releasing display classified ads?

To get on with the process of releasing display classified ads faster yet through a simpler process, contact Bookadsnow to get access to end-to-end media solutions along with receiving the best rates for your advertisement.