Think Outside the Box! Book a Hindustan Times Ad Today! 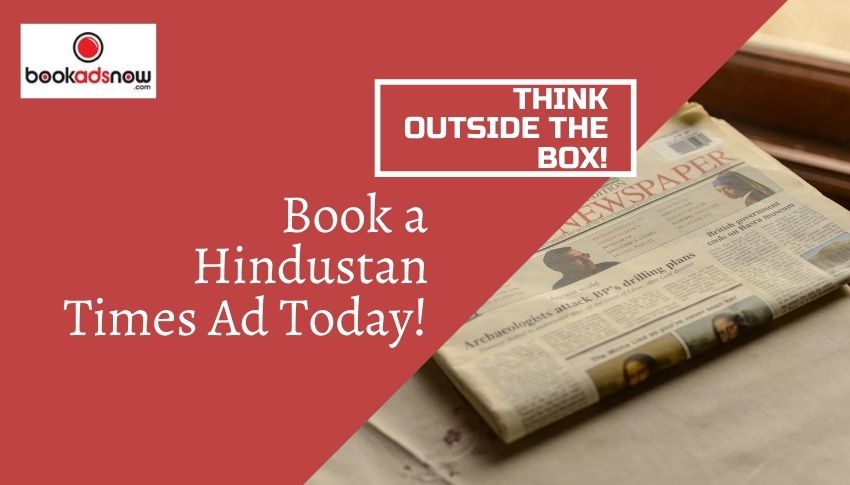 Sometimes we lead with the mainstream because it seems like a sure path to success. We feel safe investing in choices that are popular among others as there is more certainty and assurance of profit. Any business will agree with this notion.

However, does that negate the effectiveness of other options?
Diverting from the first choice for something does not necessarily mean that the others are obsolete. In fact, they may just surprise you! A clear example is the dominance of the Times of India, the country’s leading English publication that boasts great readership and circulation figures. Of course, advertisers are drawn to this platform like bees to honey due to the remarkable benefits it provides.

But even in the midst of its strong presence, the Hindustan Times beats this publication in cities such as Delhi-NCR and Mumbai. In fact, it is also the most read newspaper in the Punjab region that boasts a readership that’s even higher than The Tribune!

Being the dark horse in the sphere of newspaper advertising, it’s truly a worthy choice of a medium.

What Makes a Hindustan Times Advertisement a Unique Solution?

This newspaper has its roots in the year 1924 and is published by HT Media as a daily. Being one of the leading newspapers across India’s variety of markets, a Hindustan Times ad has great influence to its name. It has gained the trust of readers across several regions and continues to play a considerable role in delineating the country’s current affairs.

Harping on topics such as national and international news, sports, entertainment among others, it is a staple among families looking for trustworthy and engaging content. Hence, it’s not surprising that this newspaper has worked its way up as the second-largest English newspaper in the whole of India.

Let’s analyse the factors that largely contribute to its success.

This newspaper records a surge in growth as seen through its 9% increase in terms of AIR. Surprisingly, this transcends the industry’s overall growth of English readership that is 6%. Hence, this great potential can be used by advertisers when they opt for a Hindustan Times advertisement.

When it comes to tapping on the right audiences, a Hindustan Times ad will deliver your messages based on their varied interests. This publication reserves a good set of supplements for the same. Listed below are a few popular ones that come with the main newspaper.
●    HT Shine
●    HT Estates
●    HT Education
●    HT City
●    Brunch, etc.

Adhering to the principles of objective reporting and in-depth coverage, readers are subject to accurate and unbiased information with this publication. Hence, a Hindustan Times ad enjoys a receptive audience that leads to enhanced viewership of newspaper advertisements.

Keeping the readers in mind, news items are both neat in presentation and easy to understand. The editorials are specially crafted to reach out to the masses in a simple, comprehendible way. This factor plays a key role in its popularity among audiences far and wide.

Combining these advantages together makes this newspaper a force to reckon with.

However, the process doesn’t end with just choosing a Hindustan Times advertisement.

What about booking the ad? What about newspaper advertising rates? There are so many considerations that come to mind even after choosing the publication. Hence, using the multifaceted services of Bookadsnow assures a timely release that fits all your requirements at amicable rates for the same.

Get in touch with us and let’s take your business to new heights!