Benefits of Newspaper advertisement compared to other advertising platforms 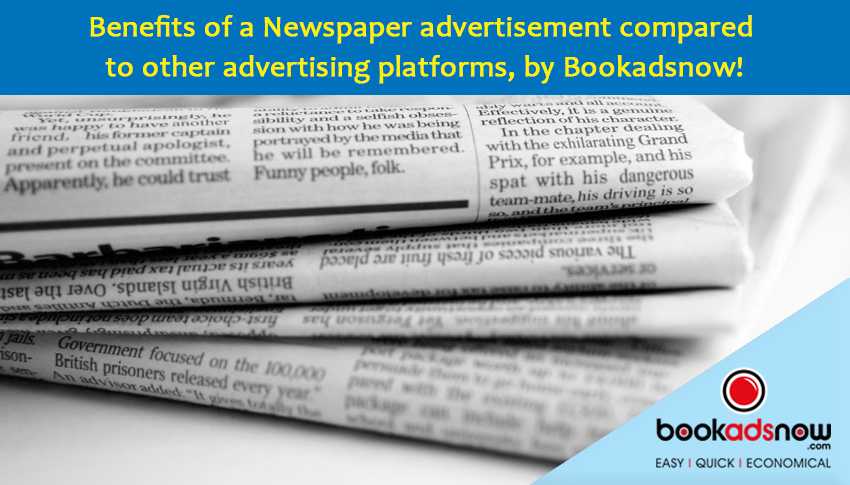 Over the span of the last few years there has been a rising opinion that newspapers are on their way out, but on the contrary the statistics prove quite the opposite! There are still countless benefits of using paper advertisement as compared to other platforms. These benefits encompass how deeply embedded newspapers are in our daily lives and how they can still be used to reach millions of people via their many offline and online advertising options.

The various benefits choosing print media for a newspaper advertisement as compared to other advertising platforms are mentioned below:

The reach of newspapers in India cannot be beaten by any other source of media. It is as diverse as it is vast. A newspaper is the most ideal medium for both receiving and providing information as its audience is not only limited to urban areas. In India there is at least 1 newspaper for every 3 Indians making it an ideal medium for paper advertisement.

These are the main reasons why the reach of newspapers is still considered the most effective way of reaching a vast number of people via effective newspaper classified ads.

The Diversity of languages: To Book Newspaper Advertisement

India has always been a very diverse country. It has about 18 regional languages spoken within it in different dialects making each language unique to its region. To cater wholeheartedly to these languages there are about 80 official newspapers for various regions published daily.

The cost and availability of newspapers is one of the biggest factors that influence readability in India. Since the subscription fee of a newspaper is not the main source of its income in the country, it keeps the rates affordable.

This factor is a very important advantage for people looking to publish a newspaper advertisement as they can reach out to several sectors of society efficiently.

It is common knowledge that any newspaper advertising agency needs to compliment an advertiser’s budget effectively. In this factor newspaper classified ads are way ahead of other forms of media. As it works on various advertising budgets. Newspapers do not disappoint any advertiser on a budget. It caters to both business and personal advertisers alike by always keeping their requirements as a newspaper’s number one priority.

Bookadsnow is an online ad booking agency partnered with some of the most well-known newspapers in India including Dainik Bhaskar, Times of India, and The Hindustan Times and so on. With over 3 decades of experience backed by an INS (Indian Newspaper Society) accreditation we are a one stop shop for all your newspaper classified ads booking needs. With our newly introduced online payments portal you can now book your ads with some of the top newspapers in the country in a matter of minutes. Take a look at some of our ad options today!