What Gives The Tribune the Edge for Booking Newspaper Ads? 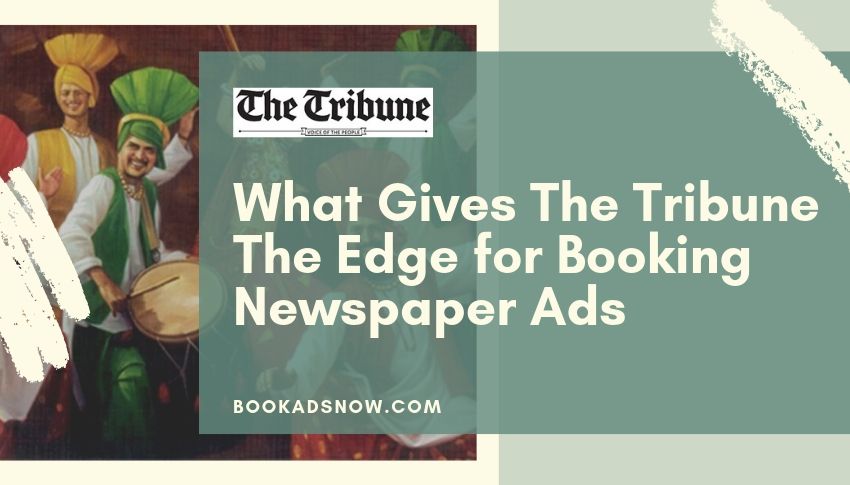 A newspaper requires a few mandatory traits that make it worthy of releasing advertisements. It needs to have a healthy circulation and readership along with a good number of editions, thereby making it easy from the advertisers to reach the target audience. Apart from that, there are other factors that determine whether it is a good decision to book newspaper Ad in a particular newspaper. Hence, let us just say, deciding on a particular newspaper to book newspaper Ad is not an easy task.

To start with, The Tribune experiences an approx circulation of 3 lakhs copies per day backed by a readership of 7 lakhs approx. An English daily dominating Chandigarh and nearby regions, The Tribune came into operation on February 2, 1881, in Lahore (now in Pakistan). It was founded by Sardar Dyal Singh Majithia and working under the ownership of the preeminent media house. The Tribune has editions in Chandigarh, Ludhiana, Jalandhar, Delhi, Amritsar, Bathinda, Haryana, Shimla, and Jammu & Kashmir.

Hence, from here, we can deduce that it is one of the most popular English dailies in North India, especially in Punjab, thereby providing the residents in this region with the latest news and stories. Furthermore, with a set of skilled individuals, the publication practices exceptional news coverage catering to various genres like politics, fashion, lifestyle, entertainment, finance, etc.

Release The Tribune advertisement to reach the Punjabi Audience

Hence, owing to such compelling reasons, advertisers who are targeting to arrest the audiences in Punjab, indulging in the Tribune advertisement is a mandatory part of advertisement strategy. The newspaper has a loyal base of customers, thereby making it fruitful for the advertisers to release Tribune classified and earning a healthy ROI, thereby reaching their goal.

However, it is a known fact that all good things comes with a cost and in this case the newspaper advertisement cost for The Tribune will be naturally high. Irrespective of the size of the brand, budget is something that cannot be overlooked. Every brand sets a budget and accordingly moves with its advertisement strategy. Hence, most of the brands will seek to book newspaper Ad in The Tribune at a discounted rate. How will they get this? By hiring a newspaper Ad agency. But who is the best? Here is the answer.

Bookadsnow - An Agency Worth Tapping On for The Tribune ads

Discover Bookadsnow- an online media planning, buying and releasing portal that has made the task of booking newspaper Ads simple. Not just that, Bookadsnow provides a discount on the newspaper advertisement rate, which is why they do not follow the policy of revealing the card rate for newspaper Ads. In this regard, the agency stands out from the other agencies in the market. Apart from that, if you release the Tribune Matrimonial ad via us, get a dose of perks like: