Is it a Smart Decision to Release Punjab Kesari Advertisement? 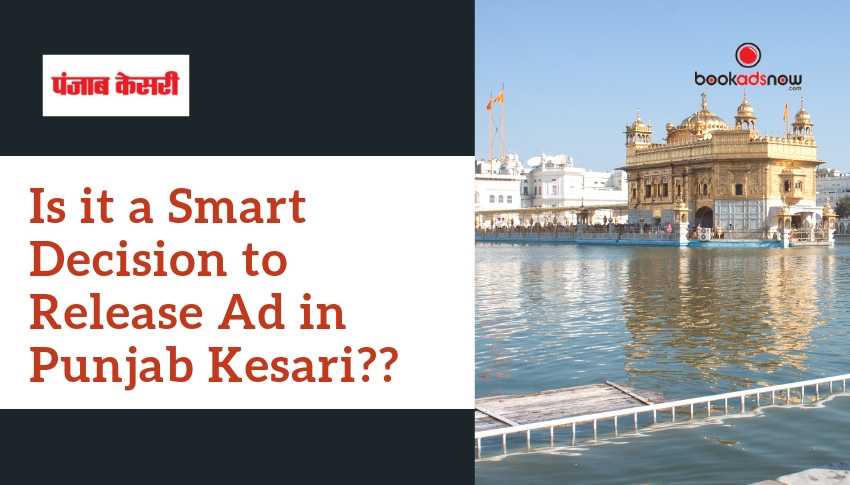 The technique of releasing newspaper ads in order to target audience’s location is a smart decision. And coincidentally, newspaper advertising has always been helpful in this regard, given the fact that it was supposed to die a long time back. However, as we see it, it is alive, healthy and running!

However, this is not what we will deal with in this blog. In this blog, we will see whether it is actually a good decision to release a Punjab Kesari advertisement at all. Before we delve any further into the publication, let us inform you that if you are intending to target the Hindi readers residing in Punjab, choosing Punjab Kesari is equal to hitting the bullseye! Why are we saying so? Here are the reasons!

Why Punjab Kesari of all the Publications?

Without beating around the bush, let us go straight into the topic. Punjab Kesari was established on June 13, 1965, by Lala Jagat Narain and later by Romesh Chander. Under Hindsamachar Ltd, the newspaper experienced an initial print order of 3500 copies which marked the success rate of the publication from the very beginning.

The newspaper was launched to take a bold stand against the terrorists and the separatist elements in Punjab. Over the years, the publication has grown without an inch from its objective. Hence, with passing time, the popularity of the newspaper has only grown. Today, Punjab Kesari experiences a total readership of 1,22,32,000 along with a circulation of 1,184,199 copies daily. In fact, it experiences the maximum circulation in Jalandhar of 7,14,888 copies. Hence, from the data, one can say the publication is quite popular among the Hindi readers in Punjab. Apart from that, the newspaper is published in regions mentioned below.

It deals with different genres like politics, fashion, lifestyle, global news, financial news, etc., thereby enabling the new age advertisers to book Punjab Kesari advertisement of various categories. Hence, indulging in newspaper advertisement strategy with Punjab Kesari is indeed a smart decision.  But what can make this move a tad smarter? We will say, hiring a newspaper advertising agency. Does that sound like an excess expenditure? Not with Bookadsnow!

To start with, Bookadsnow is an online media planning, buying and releasing portal via whom the new age advertisers can indulge in advertisement in newspaper online. Bookadsnow was formed to give true meaning to the concept of ‘simplicity backed up by great results. Hence, we have made the Ad booking process remarkably simple which can be wrapped up within a few simple steps from your comfort zone. Being accredited by the INS (Indian Newspaper Society), we have a long-standing relationship with media houses across the nation due to our long-term presence in the media sphere, precisely over 3 decades.

Furthermore, our media experts will guide you through every step of newspaper advertising strategy which is beneficial, especially for the first time Ad bookers. We also provide readymade Ad templates to our clients which increases the chances of producing better result and ROI.

We also maintain transparency with our clients until the Ads are released and provide a suitable budget after learning about the client's requirements. However, what makes us not a regular newspaper advertising agency in india is our potential to negotiate the Ad rates. We negotiate the rates with renowned publications like Punjab Kesari on behalf of our clients, thereby providing with the best Ad rates in the market. Hence, we do not believe in displaying card rates, unlike other agencies. Apart from the given information, Bookadsnow also releases TV, magazine and radio Ads.