Why Times of India Ads are Indispensable for Businesses Today 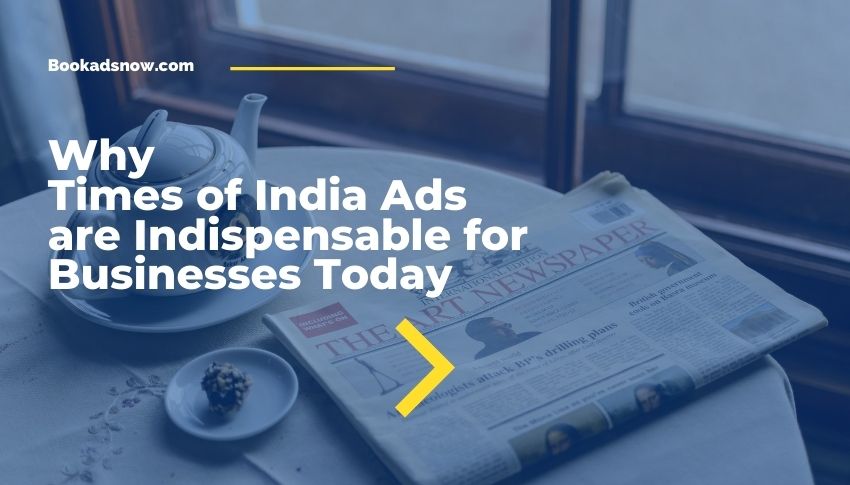 Product sales? Reaching new markets? Brand awareness? There are so many objectives and goals that come attached to the question of advertising. Every business is looking to boost the viewership of their ads and the visibility of its products/services while making optimum use of their media spends. Generating relevant leads while tapping on the right audiences has always been a relevant concern among a number of businesses.

So why should you opt for a newspaper advertisement specifically?

Research suggests that readers actually read newspapers in search of deals and offers, denoting a more proactive, conscious effort on the part of the consumers in contrast to other forms of advertising. Add this to a strong reach backed by credibility and a newspaper ad truly has it all. It is also possible to target people based on variables such as geographic location and choice of language while customizing ads based on size and space it occupies.

Offering a wide array of advantages, advertising in a newspaper should be definitely included in the marketing strategies of businesses. If it comes to nothing but the best, a Times of India newspaper ad is the ultimate solution for you! Listed below are the reasons that make them the first choice for advertisers today.

The popularity of this newspaper stems from a variety of factors. The end result? The Times of India has achieved new heights of success as the top English publication across the country. In terms of both circulation figures and readership, it towers over the others by a huge margin which is why Times of India newspaper ads come highly preferred. In fact, its nationwide presence allows you to reach the English speaking audience of over 500 cities!

As per the IRS statistics of 2019, the newspaper recorded a stunning growth of 17% from 13 million in 2017 to 15.2 million in the first quarter of 2019. This is an added 2.2 million in total readership to an already massive base! Imagine that impact directed towards a newspaper advertisement.

Even as the statistics speak for themselves, did you know that the Times of India is bigger than the other six general broadsheets combined?

While this publication has a total readership of 15.2 million, the Hindu, New Indian Express, Tribune, Deccan Chronicle, Indian Express and Telegraph add up to 14.6 million. Hence, its sheer dominance is highlighted while its growth of 2.2 million also surpasses the combined power of the above-mentioned names.

While Hindustan Times and Deccan Chronicle give it stiff competition in the North and South respectively, Times of India ads enjoy a strong overall presence across the country’s interiors, which make them the ideal tool for modern-day advertising.

Hence, it’s not wrong to say that a Times of India newspaper ad will surely stand out due to the outstanding influence of this newspaper. Well ahead of its contemporaries, it also offers an added advantage for advertisers with its vast range of supplements. Its most popular ones include Education Times, Times Ascent and Times Property alongside others to tap on the varied interests of audiences.

There’s one more thing that would make your advertising goals complete.

TOI ads get better with Bookadsnow! Be it the amicable Times of India advertisement cost compared to the market or the ability to aid in time-sensitive releases, get the best for your advertising needs under one roof. You can also expect 24/7 ad booking services along with end to end ad booking guidance from the in-house team of media experts.

So get in touch with us and release a newspaper advertisement today!