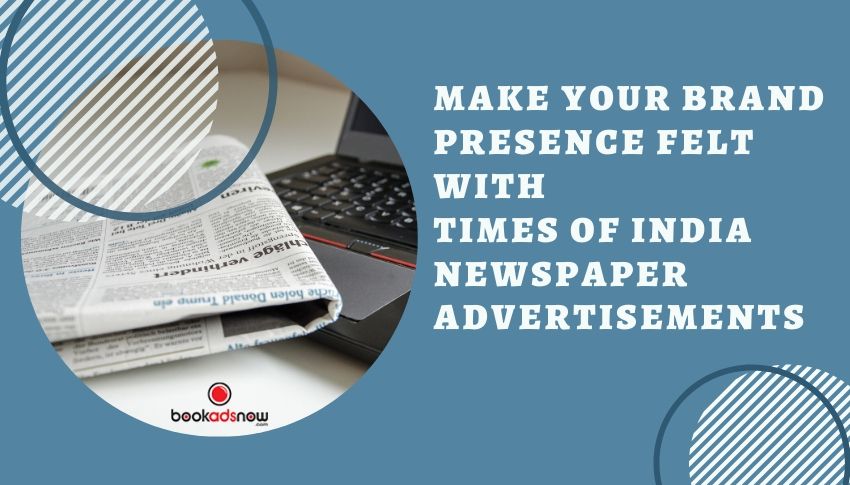 As a carrier of news and current affairs, a newspaper has withstood the test of time owing to the fact that its popularity is steady till date (if not increasing). As a general observation, people tend to place their faith in the written word since it is evidence and concrete proof of existence. That’s something that digital mediums have yet to match up to.

This basic reason of trust is why brands wishing to advertise their business choose newspapers as their preferred medium. Being a fundamental reason, people continue to use newspapers for advertising purposes since it contributes to lead generation and better results. That being said, an advertisement in Times of India newspaper is known to have beneficial impacts for advertisers in today’s media scenario. As a communicator of news and a tool of promotion, its two-fold advantages make it a top choice.

Let’s dive in and see specifically why it is a must-have for modern advertising needs.

Reasons that Contribute to the Successful Impact of TOI Advertisements

In today’s media scenario, this newspaper enjoys a good place in not just Kolkata or Delhi, but throughout the country’s vast interiors. Advertising agencies are always in line to use the Times of India for their ads and releases. Why is this so?

Listed below are a few yet crucial pointers that throw light on the same:

The articles and written items are well-crafted by the editorial team that works tirelessly behind the scenes. Their expertise is clearly reflected through the readership figures of 2019(Q1) which stands at 15.2 million. It is the quality of content that is produced on a daily basis that compels one to pick up this newspaper.

Bennett and Coleman are widely known through their flagship brand of the Times of India. Newspapers such as the Economic Times and Ei Samay are also a few well-known offerings from the same group. Hence, each of their brands is well-known in their respective cities and the Times of India is clearly a major player.

Popular throughout the country

Ranked as India’s top English daily, a Times of India newspaper ad is backed by a promise of good visibility. All corners of the nation are familiar with this publication. Hence, if there is a region you are specifically targeting, using this newspaper goes a long way to serve your purpose.

Understanding the need for reliable and authentic information, the Times of India relays unbiased and credible news through its meticulous reporting. This newspaper is known for its ability to present relevant information and facts. Moreover, these are written in a style that enables others to comprehend the same.

Series of supplements for readers

Supplements are extra parts of newspapers that dive into various topics and subjects. Health and entertainment are some of the most popular subjects on the list. Using TOI ads allow you to use supplements such as Times Wellness and Times Ascent for advertising purposes. Hence, expect better results for ads when choosing this newspaper.

It is a lesser-known fact that the name ‘Times of India’ was only issued in 1861, 23 years since it was first coined The Bombay Times and Journal of Commerce. Today, this name is recognized as a top publication throughout the entire country. Advertisers seeking to promote their brands will receive nothing but benefits when they opt for the Times of India.

As per the Q1 figures of 2019, this newspaper records a daily circulation of 3,198,449 copies. Imagine harnessing these numbers for your brand. Using a good advertising agency, it is wise to release your advertisements in the Times of India for the best results of your advertising campaign.