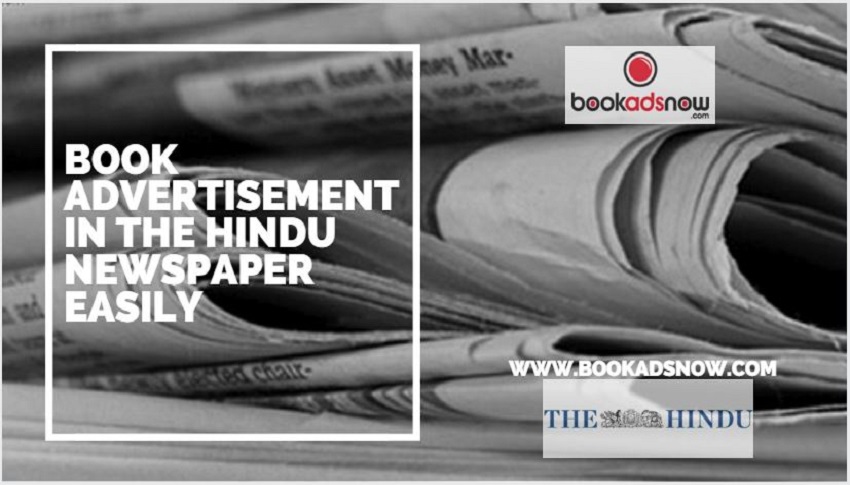 If you are looking for ways to release the Hindu advertisement without going through elaborate steps, then we have got you covered in this write-up!

However, why did we choose the Hindu newspaper out of the gamut newspapers present in India?

Let us just say the Hindu is more than just a publication. It is a tradition that came into action in the year 1878 as a weekly and gradually became a daily by 1889. Since then, this newspaper did not cease from producing a remarkable performance in the sphere of media owing to its unparalleled nature of journalism. It is the most widely circulated English daily in Southern India with its HQ in Chennai (Madras). It has printing centers in Coimbatore, Bangalore, Hyderabad, Madurai, Noida, Visakhapatnam, Thiruvananthapuram, Kochi, Vijayawada, Mangalore, Tiruchirappalli, Kolkata, Hubli, Mohali, Allahabad, and Kozhikode. These printing centers make sure to coordinate with each other in the quest to provide the major cities as well as the small towns with a reliable and balanced presentation of news.

Thus, the popularity of the newspaper gives the principal reason to book the Hindu advertisement by the brands and individuals achieve the desired results.

Given this fact, familiarize yourself with the other reasons which drive the advertisers to choose this publication for the purpose of booking newspaper Ads.

Why target the Hindu Newspaper for releasing newspaper Ads?

Unmatched Circulation: Today, the Hindu experiences a circulation of 15,58,379 copies per day along with a readership of 22.58 lakhs in the nation. Precisely, a newspaper with such an extensive circulation will allow your Ad to receive a healthy viewership, thereby fulfilling the purpose of releasing any type of Ad in this newspaper.

Cost Effective Ad Rates: On a general note, newspaper Ads are expensive compared to the digital form of advertisement. Furthermore, releasing Ads in the top newspapers might double up the expense further. However, with The Hindu obituary advertisement, the scenario is a tad different. The prices of the Ads in this publication is budget-friendly when compared to newspapers of the same standard which yet again proves to be worthwhile for the advertisers.

Various Supplements: The Hindu is one such newspaper which comes with a plethora of supplements, a factor that puts this newspaper under the limelight. Hence, individuals or brands can choose to release the Hindu ads in the supplements of their choice that will align best with their advertisement theme. Here is the list of supplements that come with the newspaper.

However, if you are seeking to release the Hindu advertisement in no time, tap on Bookadsnow to book newspaper Ads online in a few simple steps.

Why is Bookadsnow the Best in the Market to book the Hindu ads?

Bookadsnow is an online media planning portal with 30+ years of presence in the media sphere. They have made the process of booking newspaper Ads a super easy task. They have taken the step that will enable the advertisers to book newspaper Ads online in a matter of few minutes that will further generate better results. Here are the reasons why you should consider Bookadsnow to book newspaper ads online in the Hindu publication.

Strong relation with every Media Houses: Bookadsnow has a long-standing relationship with the Hindu, which is not found with other media planning organizations.

In-house Media Planning Team: We have a sharp and proficient in-house media planning team who will guide you in the course of booking and publishing newspaper ads.

INS Accreditation: Bookadsnow is recognized by Indian Newspaper Society or INS which adds to the value of the brand name.

Complete Transparency and Negotiable Media Rates: We at Bookadsnow believe in maintaining a transparency with our clients to avoid any confusion. After you tie up with Bookadsnow for releasing newspaper advertisement, they will provide you a hard copy of the newspaper to see the published Ad. Moreover, we have the potential to negotiate the Ad rates with the renowned media house like the Hindu on behalf of our clients which is why we do not have a predefined card rate.

How to book the Hindu Advertisements through Bookadsnow?

Step 2: Select Hindu as your newspaper.

Once you are done with the whole process of booking your Hindu advertisement, the in-house media team of Bookadsnow will contact you and guide you with other details of your newspaper Ad along with setting a relevant budget.