Book Advertisement in Times of India at Lowest Rate 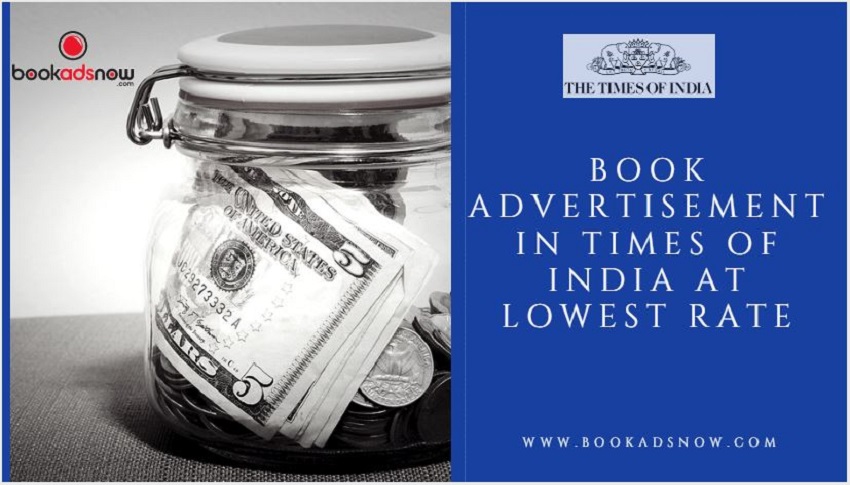 Getting the best Times of India advertisement rates for newspapers is not an easy task.

Why are we saying so?

The Times of India is a name that is popular nationwide since 1838. The quality of the work it portrays through their unmatched journalism technique has always put this publication into the limelight. Under the ownership of Bennett, Coleman & Co. Ltd., this newspaper has built a loyal reader base of 7.59 million customers along with an unbelievable circulation of 3,184,727 copies per day which gives TOI an edge in this industry.

Releasing Ads in the Times of India is coupled with benefits like:

Quick Publishing: The enormity of TOI as a publication house carves out the path for the brands and individuals to book newspaper Ads online or offline even at the last minute. The execution of such Ads is done with perfection owing to the presence of skilled and experienced in-house experts in the organization.

Extensive Viewership: Since TOI has an extensive reach in all the major cities. Due to its extensive viewership, Times of India advertisement rates is relatively high. TOI is released in most prominent cities like Mumbai, Delhi, Kolkata, Chennai, Bangalore, Hyderabad, etc. along with small towns which altogether gives rise to a healthy viewership of the newspaper advertisement.

Different types and Format of Ads: With TOI a variety of advertisements can be released. The Ad types are Matrimonial, Property, Education, Recruitment, and Times of India Obituary and so on. Apart from that, each of these advertisements can be released in any of the three broad formats namely the Classified Text Ad, Classified Display Ad and Display Ad.

Therefore, how are you supposed to get out of this monetary trap?

The secret lies in choosing an efficient newspaper Ad agency who will be able to provide you with a favorable Times of India advertisement rates without compromising on your needs.

So, is there any such newspaper Ad agency who can help the prospective advertisers with the same?

Considering booking newspaper Ads through Bookadsnow to receive the best Times of India advertisement rates in the industry. But why Bookadsnow of all the newspaper Ad agencies in India? Familiarize yourself with the legit reasons that will justify our previous statement.

With an experience of 30+ years in the media industry and an accreditation by the Indian Newspaper Society (INS), both these elements add to their credibility. This has allowed them to develop a long-standing relationship with most media houses on a regional and national level. The best part about this online media planning portal is that they do not have any pre-defined card rate for booking Ads in newspapers.

Apart from that, Bookadsnow has an expert in-house media planning team that work continuously to guide the clients through the Ad booking process. They seek for the best Ad position on a specific page of TOI as per the client's request. Furthermore, they have an Ad creative team who will provide you with the best creative options for a successful advertisement. It further simplifies the Ad booking process, thereby generating better results for the clients. Moreover, once your Ad gets published in TOI, Bookadsnow provides the client with a hard copy of the newspaper as a proof of their agreement.