Reasons to Release Obituary ads in Times of India 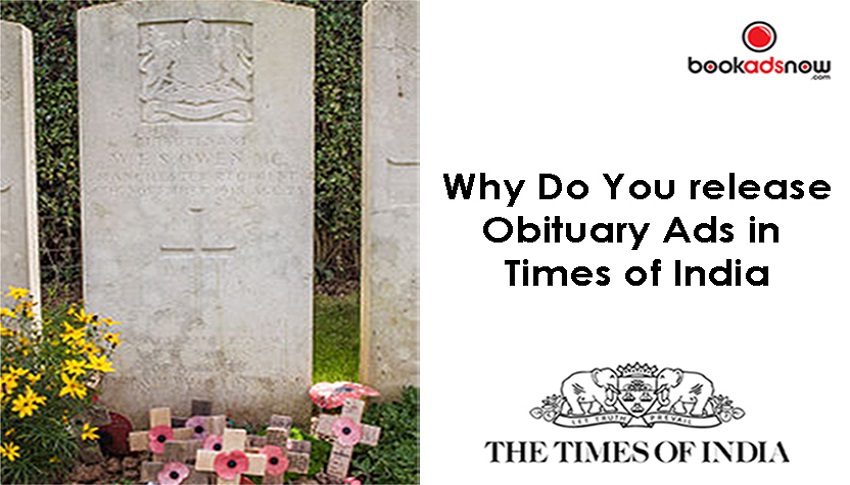 There are numerous perks of publishing obituary Ads in the Times of India. This write-up hopes to shed light on the positives of releasing advertisements in this daily. This is an important prerequisite given that there are umpteen dailies that consumers can pick from. Given this, why does one choose The Times of India over other publications?

The Times of India that has continued to be dominating the media industry since 1838. Its unmatched procedure of covering events and news has paved way for the classification of The Times of India as a reliable source of information in the sphere of media. Under the ownership of Bennett, Coleman & Co. Ltd., this newspaper has successfully built a loyal reader base of approximately 7.59 million customers nationwide.

Thus, the popularity of the newspaper is a primary reason that motivates individuals to book the Times of India obituary ads. It informs all: acquaintances, friends, and relatives about the death of a beloved.

However, let us learn about Obituary Ads first!

Obituary Ads are released to inform all: acquaintances, friends, and relatives about the death of a beloved and provide them with details of the upcoming funeral. Hence for this purpose, the Times of India obituary ads play a pivotal rule.

But why choose The Times of India for releasing Obituary Ads in?

Remarkable Circulation: Since The TOI has an extensive reach in all the major cities, the likelihood for an extensive viewership of the Times of India obituary Ad is also high. It is received by prominent cities like Mumbai, Delhi, Kolkata, Chennai, Bangalore, Hyderabad, Jaipur, Goa and Surat among others. This will precisely facilitate a healthy viewership of the obituary ads in the newspaper, thereby fulfilling the purpose of releasing the Ad in TOI.

Different types of Obituary Ads: An individual can release a variety of obituary Ads in newspapers like The TOI. The Ad types are as follows:

Immediate Publishing: The enormity of The TOI as an organization allows them to take up the booking for obituary Ads even at the eleventh hour. The execution with perfection is enabled by their in-house experts who understand the situation of such families.

However, this immediate publishing is carried out with the assistance of newspaper advertising agencies. When it comes to releasing obituary Ads in newspaper they play a pivotal role because they guide individuals and families to release Ads that will have greater visibility. This is what will be received if someone tries to book a Times of India obituary Ad through Bookadsnow.

Why is Bookadsnow the Best Ad agency for this purpose?

Bookadsnow is an online media planning portal that was introduced by Lookad India (P) Ltd. Lookad has been in the media industry for 30+ years. This gives Bookadsnow numerous edges and the reasons why one should opt to release obituary Ads in newspapers through them are as follows:

Strong relation with every Media Houses: Bookadsnow benefits from the long-standing relationship of Lookad with the Times of India. This is not found in other media planning organizations.

INS Accreditation: Bookadsnow is recognized by Indian Newspaper Society (INS) and this adds to the credibility of their organization.

Complete Transparency and Negotiable Media Rates: We at Bookadsnow believe in maintaining a clarity with our clients to avoid any confusion. After one decides to release obituary Ads in the newspaper through Bookadsnow, they provide the advertiser with a hard copy of the newspaper in which the Ad is published. Moreover, they negotiate the Ad rates with all renowned media houses like the TOI on behalf of their clients. This is why they do not have any predefined card rate.

Better Placement of your Ads: Bookadsnow will make sure that you get the best spot in the Times of India for the publication of one’s obituary ads. Our in-house expert team is skilled enough to ensure that ads are released on the spot of one’s choice.

For further information, one can browse through the official website of Bookadsnow or get in touch with them @ 9830400021 or email them at info@bookadsnow.com.

How to Book Obituary Ads in Times of India

How to Book Obituary ads in Hindustan Times

How to Book Obituary ads in The Hindu