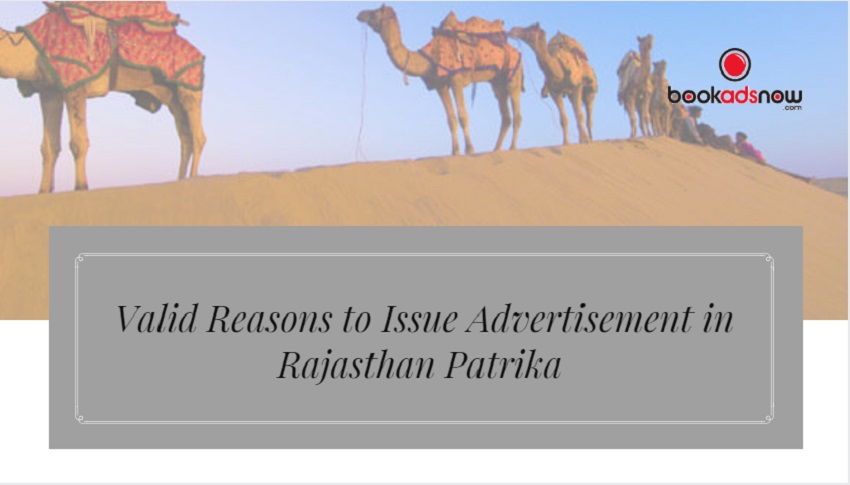 Hindi, being an official language in India, holds a prominent place in our hearts and in our day to day lives. And why not? Hindi is a widely spoken language in the country with a total number of Hindi speakers being 55,14,16,518 with 42,20,48,642 using Hindi as their first language which is 41.03% of the total population. Hence, the presence of Hindi publications is imperative as it helps individuals interact with the events around the world better and keeps them updated.

Thus, India is flooded by a plethora of Hindi newspapers, each competing with the other in terms of circulation and readership. However, there is cut-throat competition and like any other competition, Hindi newspapers are ranked as well. Hence, today we have decided to throw some light on Rajasthan Patrika and why the advertisements in this newspaper should be issued via Bookadsnow.

But first, let us familiarize ourselves with Rajasthan Patrika as a Publication!

Founded on 7th March 1956 by Karpoor Chandra Kulish in Delhi and Rajasthan, Rajasthan Patrika became a popular Hindi Daily over the years. Under the ownership of the Patrika Group with its HQ in Ahmedabad, Gujarat; Rajasthan Patrika was designed to satisfy the news appetite of people living all over the world from the land of Rajasthan. By keeping the flag flying high with its journalistic prowess, the group believes in maintaining its quality and analytical reportage on varied subjects. Rajasthan Patrika provides news focusing on the state & cities of Rajasthan with a medley of national and international news coverage.

Today, the newspaper is one of the top 10 newspapers in the nation with a circulation of 1,813,756 copies daily backed up by a readership of 1,63,26,000 readers. Hence, its very statistics makes it indispensable for the advertisers to release a Rajasthan Patrika advertisement. Be it a Rajasthan Patrika display Ad, matrimonial Ad, property Ad or any other type of advertisement, advertisers channels this form of advertisement to target the Hindi speaking audiences residing in different regions of the nation.

However, in this fast-paced world, nobody has the time to go through the tedious process of booking newspaper Ads. Hence…

What is the Solution of Releasing Rajasthan Patrika Advertisement?

Just as our blog topic reads, Bookadsnow is the ultimate solution to book Newspaper ad in Rajasthan Patrika in a few simple steps. Bookadsnow represents the new-age Ad booking system that will generate great results for the advertisers that too at a cost-effective rate at their convenience.

But, what are the extra perks that an advertiser gains from their association with Bookadsnow?

If you are an advertiser, interested in releasing a Rajasthan Patrika tender Ad, be assured that our in-house media planning team will guide you through all possible steps. Bookadsnow is an online media planning, buying and releasing portal with a presence of 30+ years in the media sphere. The synergy between its INS accreditation and its proficient in-house team helps Bookdasnow produce the best Rajasthan Patrika advertisement, thereby promoting a healthier engagement from targeted audiences. Furthermore, our long-term presence in the industry has enabled us to maintain a solid relationship with various media houses across the nation.

Lastly, Bookadsnow has done away with the policy of maintaining a predefined card rate as we have the power to negotiate the Ad rates such as the Rajasthan Patrika classified rates with the concerned publication house. This way we are always ahead of the other Ad agencies as we provide them with the best newspaper Ad rates.

To learn more about the online portal and the steps involved in booking Rajasthan Patrika advertisement, browse through their official website, drop them a mail at info@bookadsnow.com or call them @ 9830400021.