Online or Newspaper Advertising- the better choice for Property Ads? 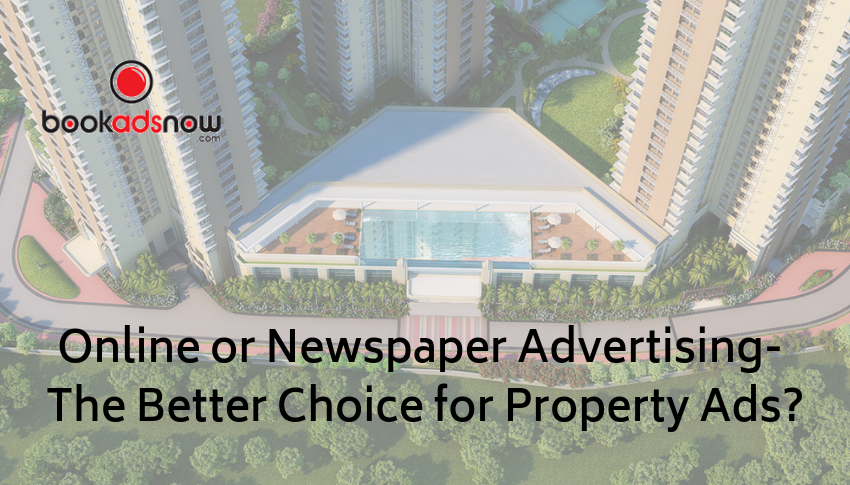 Nowadays, it’s hard to see anyone without a mobile phone in their hands. Whether they are at a restaurant, crossing the road or even watching a movie- the cell phone seems to have become man’s constant companion. The growing dependence on the device is because of its many functions and capabilities. It is used as a miniature computer by many, especially those who can’t afford a laptop or desktop. The growing numbers of mobile internet users in India make digital advertising one of the most influential and useful platforms in the Media Industry. However, the popularity and promise of this platform always create a misgiving as to the effectiveness of other platforms. Eventually, it gives rise to the question as to when advertising, which platform should an advertiser tap on- digital advertising or newspaper advertising? While digital advertisements work well for a few sectors, the power of newspaper advertisement can be felt in every field. So, is it a good idea to a property advertisement in newspaper?

For centuries, the real estate developers have published their property advertisement in newspaper for two primary reasons-

With sites like Magicbricks, 99acres, Property Bazaar, and many more, the real estate industry has (it seems) found the perfect solution as compared to the older method of placing an advertisement in newspaper. There can be no doubt that real estate developers are more inclined to use digital platforms nowadays but does this mean that, for example, Times of India property ads are now defunct and useless?

While property advertisement in newspapers are older and may not have the reach of the digital counterparts, still there are some advantages to book newspaper ads online:

The best solution to getting the best ROI in this sector is to use a mix of digital and newspaper advertising. Say you have a property you would like to start a campaign on - the stages are divided into pre-, during-, and post-launch. The Pre- and Post- launch periods could be mostly digital, while the during- launch period should have a substantial amount invested in property advertisement in newspapers. This division of the advertising budget should increase one’s responses and reach.

So say, now you are looking to place Times of India property ads, how do you go about it?

Place your advertisement in newspapers through an agency such as Bookadsnow. Bookadsnow is a media buying, planning, and releasing agency with more than 30 years of experience in the media industry. This enduring presence has allowed them to build bonds with media houses all across the country and allows them to negotiate the best prices in the market. Furthermore, Bookadsnow has the potential to provide you with the best position and section in the paper for your advertisements. The synergy of inhouse media team and the INS accreditation makes them capable and credible of handling all the request of their clients. They have also simplified the online booking process down to a few simple steps on their official website. Browse through www.bookadsnow.com or you could call them at 9830400021 and speak directly to the experts.