Is it Worth Advertising in The Hindu? 3 Solid Reasons Why 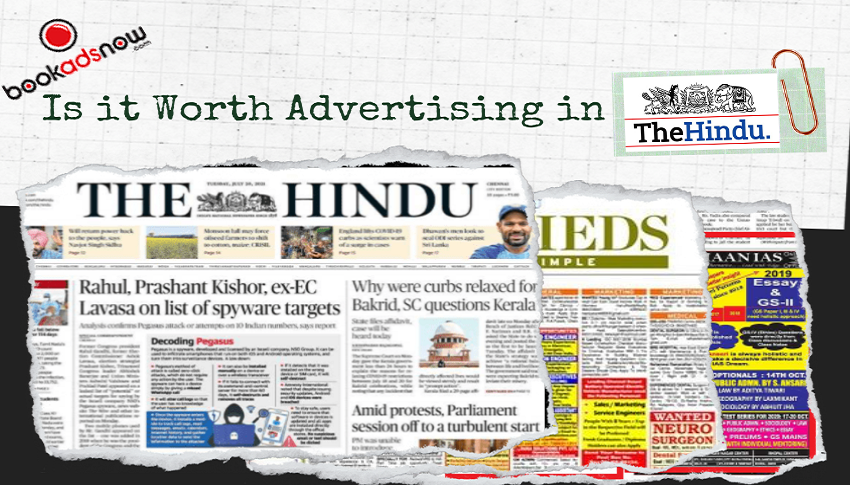 Experts often say that when you buy a home, you also buy the location surrounding it. The same line of thought applies to newspaper advertising as well. When you choose to advertise in a newspaper, you also choose to leverage its status, popularity and credibility to promote your brand. More than just advertising space, its reputation ensures that your messages are seen in a better light. And no advertiser can go wrong by advertising in The Hindu.

Setting a benchmark in the world of journalism, this newspaper is trusted by millions for its reporting. A classic example is its involvement in the Bofors Expose (1987) which is still seen as a remarkable moment in Indian investigative journalism. Recommended by any newspaper advertising agency, its 140+ years of journalistic service has set it apart.

This publication has its roots in the year 1878 – one of India’s oldest running names still in existence. Unknown to many, its seed capital was nothing more than a rupee and twelve annas. This inaugural edition carried a sharp editorial that spoke against the unjust British rule and stood firm for independence. In the face of unfairness and justice, its accuracy and efficiency have made newspaper ads in The Hindu a great choice for modern advertising needs.

And to sum up the factors, here are a few reasons to advertise in this publication.

The Hindu: The Right Name for Successful Newspaper Advertising in India

Trusted for Quality, Recognized by All

The Hindu enjoys the status of one of India’s most respected newspapers. It has a wide appeal among the English-speaking segment of the population. More importantly, the balanced news coverage it provides each day is devoid of bias in any form – the truth and nothing but the truth. Dedicated to pure journalistic excellence, it is India’s pride and glory that is even ready by government officials and business leaders. This makes newspaper ads in The Hindu a great solution for better ROI.

Presence of Superb Statistics and Numbers

This publication is particularly popular in Tamil Nadu and Kerala, with constant development in Andhra Pradesh and Telangana. It is published in 21 cities and 11 states across the country, including Bengaluru, Hyderabad, Kolkata, and many others. This provides a series of editions at your disposal. Furthermore, its range of supplements can amplify your newspaper ads in The Hindu. Its names like Young World & Metro Plus are a great medium to target audiences based on niche interests.

It's not always about the content of your ad. It's not always about the eye-catching graphics or colours either. The success of advertising also depends on the vehicle you use to distribute your ad. Newspaper advertisements are only as effective as the medium in which they are displayed. In this case, advertising in The Hindu will do wonders for your ad, giving you more exposure and a better outcome than you could expect.

The newspaper you choose can make a huge difference. So why not choose the best? Bookadsnow, a popular newspaper advertising agency, provides easy ways to book your ad. Get in touch to ensure that your advertising journey reaches a successful end as per your goals and objectives.

Get in touch today!