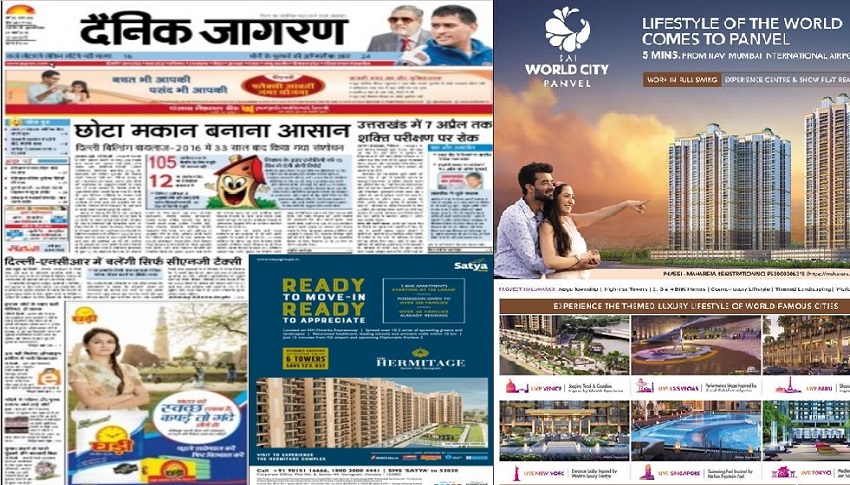 Did you know that India reserves the largest newspaper market in the world? With roughly 6,700 publications spanning across 26 crore copies distributed daily, this is definitely a matter of pride! After all, there’s no one that can deny the importance of a newspaper. Being a morning ritual for many, people prefer getting a headstart to the day with a newspaper at hand.

Advertisers prefer newspaper advertising as well since it aligns with their goals of brand awareness and lead generation. Moreover, its unparalleled credibility has the world’s biggest brands still continuing to use its age-old charm. And if you’re looking to make the most of your property advertisement in an Indian newspaper, we have shortlisted the top publications that will add value to your decision.

Here’s all you need to know.

Top Newspapers to Choose for Property Ads in India

Providing relevant news on markets, share prices and everything about the business world, this newspaper enjoys great popularity today. It is also published by Bennett & Coleman, the same hand behind The Times of India.

Bringing the best of national and international financial news, it enjoys preference due to fresh, authentic content on a daily basis. For enhancing commercial awareness, this newspaper is a great choice for those looking to release a property ad.

India’s favourite English newspaper. The oldest newspaper in India is still in circulation. There are ample reasons to choose TOI for your property advertisement in a newspaper. In-depth reporting, unbiased and accurate information as well as content across several categories – TOI has it all!

It has a great reputation and is distributed among important towns and cities for maximum impact. Being the number 1 leader in terms of information propagation in the news and information category, there’s no better choice than the best!

Another great choice for an English daily, The Hindu is one of India’s longest-running newspapers. In fact, it also spoke out against the British during the struggle for independence. You can expect well-crafted articles and editorials that are rooted in credibility.

Being trusted for years on end, its 140+ years of journalistic service to the nation makes it one of the best choices for any type of newspaper advertisement. Its high standards of journalism will ensure the strong visibility of your ads.

This is another newspaper that has roots in the struggle for independence. Bearing witness to the Quit India Movement, it was incepted in 1942 and served as a voice of the masses. But its popularity lived on. In 2006, BBC-Reuters had called Dainik Jagran India’s most credible newspaper!

Addressing readers from all walks of life, it covers current affairs across a wide range of topics. Its rich editorial content and strong readership make it almost indispensable for property advertisements in a newspaper. It is a great option due to its extensive reach and immense exposure.

How often do you get the chance to advertise in an award-winning newspaper? Dainik Bhaskar has bagged several honours along its path for fearless reporting and customer engagement. Being one of the world’s largest circulated newspapers, it is definitely the best choice for a property ad or any for that matter.

It enjoys an Average Issue Readership of roughly 15 million readers in India! Favoured for its reader-centric approach to news, its impressive statistics and reputation would give advertisers more than they bargained for. For any newspaper advertisement, choosing Dainik Bhaskar will definitely impress.

Hailed as one of India’s top dailies, Amar Ujala enjoys a great position in India’s print media scenario. Reaching 4.70 crore readers, a property advertisement in this newspaper brings great results. It was founded on the grounds of truth & objectivity and played the role of a precursor to a ‘free India’.

Keeping objectivity at the centre of its operations, its factual reporting makes it a favourite among the top Hindi newspapers today. Be it Haryana, Delhi or Uttar Pradesh, any newspaper advertisement will work well by choosing Amar Ujala.

Hindustan Times is a great choice for an English-language publication. To display its strength, it also beats the popular TOI in certain markets. Whether writing language, attention to detail or factual-based information, it has rightfully won the hearts of many from its inception back in 1924.

Using the Hindustan Times would be the best choice for a property ad in North India. With an average readership of 3.7 million, it has become a household name in many areas. Choosing this newspaper would definitely be considered a wise choice.

So if you’re planning to book a newspaper advertisement online, choosing from this list will prove to be worthwhile. To understand exactly how to leverage these publications, get in touch with us at Bookadsnow and unlock the secrets behind successful newspaper advertising in India!

Reach out to us today for more information.