Accommodations Wanted: Get in Touch with Sellers through Property Ads in Newspapers 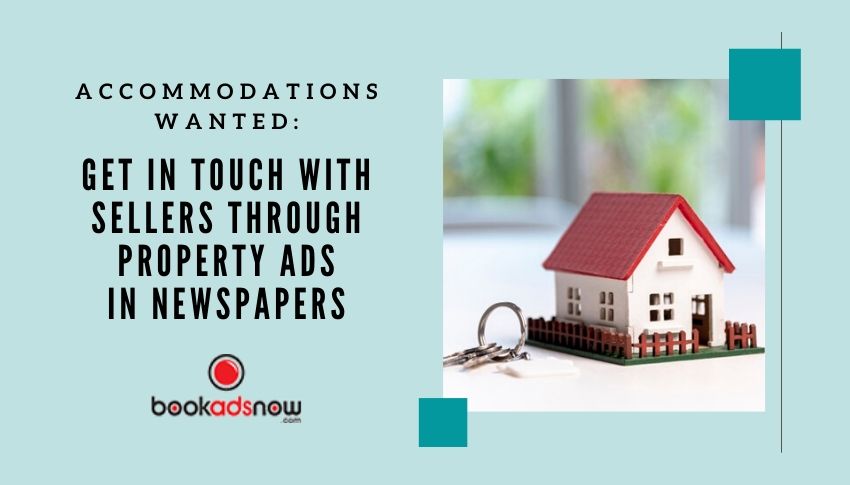 Change has always been a crucial part of life. Ranging from lifestyle habits to relocation due to preferred schools and colleges, change is constant no matter where we are. Some people relocate due to their jobs while others move away from their native homes for a change of air. Whatever be the reason, there has always a migration of people from one place to another throughout the country.

In such a case, finding accommodation is important when you look for a change and step foot into a new city. Many perform an inquiry or try to get in touch with brokers from the said region. However, an effective solution would be to release a property advertisement in a newspaper. This is because of two fundamental reasons. Firstly, newspaper ads are a time-tested and trusted source for generating leads while they can also target specific regions and demographics.

Based on your requirements and location, you can find the property of your choice and hence, the power of local newspaper advertising will surely serve your purpose. However, there are a few considerations to keep in mind before going ahead and releasing this type of newspaper ads.

Here’s all you need to know.

4 Things to Focus on Before Releasing an Accommodation Wanted Advertisement

The success of this type of property advertisement in a newspaper rests on a series of factors.

1. Accurate details of the property you wish to buy/rent

When you release this kind of newspaper advertisement, it is crucial that you specify your exact demands in a property. For instance, “an independent well-furnished house in South New Delhi, two bedrooms with attached bathrooms, drawing, dining and a family lounge”. You could also mention the required carpet area of the spaces. It is important that the information regarding size, number of rooms, etc. provided be in a clear and crisp manner.

While mentioning the basic desired information, you should also provide a few conditions for renting/buying the said property. For instance, you can mention the type of neighbourhood you would wish to reside in or that the property is situated close to a metro facility. Some also mention basic details such as 24/7 water and electricity. Others also mention the price range they are looking at while some leave it to ‘reasonable rent’.

Of course, it is important to leave your contact information in the advertisement so that the interested parties get in touch with you. This is normally in the form of a name and a mobile number attached. You can also mention your home address if need be.

4. Presentation of the advertisement

Last but not least, it is important that this property advertisement in newspaper be properly displayed in the newspaper and this is not just regarding positioning. While it is typically an ad with ordinary text inside a box, you can make it stand out from the visual clutter of the page. You can use enhancements such as a tick, bold fonts, colours, etc. to draw attention to it. This entirely rests on personal preferences and financial capabilities.

Being the powerful medium that it is, people often turn to local newspaper advertising as their source of information. However, releasing your newspaper advertisement is a different story altogether. Those that wish to release their ad in a different city may face difficulty due to a variety of reasons. For instance, the rates may significantly vary or there may be confusion as to the process of releasing them. Not to mention, how will you trust the agency to release the ad when they are situated in a different region altogether?

It is because of factors such as these that people place their faith in Bookadsnow - a newspaper ad agency that helps one to book ads across the country at a rate that’s better than that of the market. With its headquarters in Kolkata, it has strong ties to several media houses and hence, can guarantee last-minute and time-sensitive releases. It is also popular among advertisers due to the ease it offers while booking advertisements.

On that note, here’s all you need to do to have your newspaper released:

Step 1. Visit www.bookadsnow.com and select the type of ad you want to publish.

Step 2. From the list of newspapers, select the newspaper of your choice.

Step 3. Provide the necessary information such as your name, e-mail ID, phone number and a leave a comment if necessary.