Traditional Vs. Digital: Which Media Should You Choose? 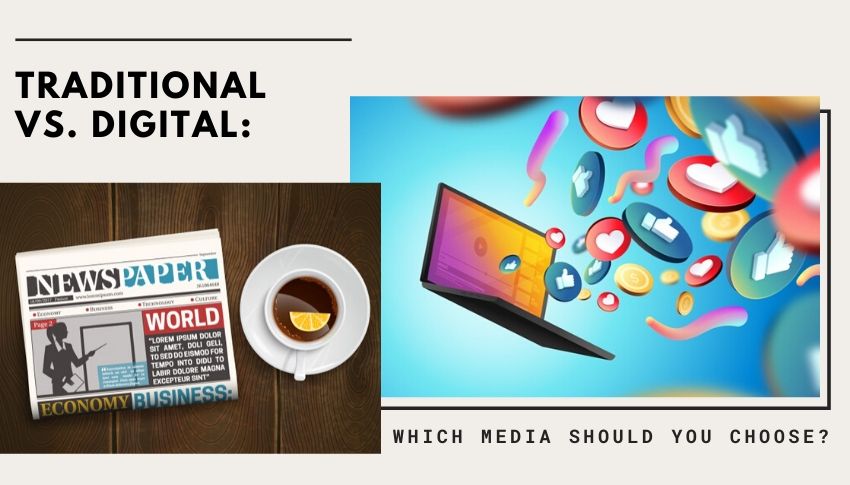 Every business owner in the 21st century knows that advertising is crucial for the success and growth of their business. However, the rise in digital and its continued challenge to traditional forms of media has left many wondering how to construct one’s media mix efficiently. Should it be skewed towards digital with efforts like social media posts or towards traditional with the trusty newspaper ads?

This question has been intensifying in the last two decades or so with companies left wondering how to increase their marketing budget accordingly as well as to utilise it effectively in their media mix. After all, having a great product does not automatically equate to having a successful business. You must also possess a proper media plan and also know how both traditional and digital function in the market.

Before we go ahead with the assessment, let’s first understand what traditional and digital actually mean.

Digital is an interactive medium and is amongst the fastest growing in the world. It is a unique medium as it generates a huge volley of information regarding audience and their engagement with the medium, allowing for real-time measurement and analysis of data. This, in turn, allows for personalizing the content of the marketing messages based on the various characteristics and needs of the demographic a business would like to target. Digital can be called an inbound marketing method and customers are more likely to engage with content that is specifically geared towards them.

More and more people are spending increasing amounts of time online and likewise are adjusting their spending habits according to their online behaviour. This is being seen as an opportunity by both the digital marketing sector and businesses to generate leads and increase profits.

Being as old as time itself, this form of media needs no introduction. Similarly, traditional advertising is one of the oldest forms of marketing and everyone should have been exposed to it at one point or the other. They are the dominant form of advertising still and constitute of types we see regularly.

Traditional media consists of the following:

Traditional media is known for its credibility. Endless consumers have placed their trust in these forms of media as they have existed for a long time and therefore have ingrained themselves in popular society. It is also known for its impact. With no ‘pop-ups’ to disturb the readers, they can engross themselves in both the stories as well as the newspaper ads with complete attention.

Various traditional formats have in fact found their target groups. While catalogues are a raw source of information for consumers, newspapers can attract readers through their informative articles. Television ad rates and newspaper advertisement rates may drastically differ from each other but this is because of the reach each medium provides as well as the audiences it targets.

Traditional and Digital, A United Front

Many traditional media like television, newspaper and even radio channels have an online presence these days. This goes to show how digital is being used to bolster the reach of these traditional formats. Likewise, digital services advertise through traditional platforms to leverage their trustworthiness for their products and services. You can always hire a newspaper advertising agency to help you with the traditional side of marketing while a digital agency can be used for online advertising.

Going forward, you should realise that your target market is not simply going to consume one type of media or even consider the advertisement being released in them as the same. Having a proper outcome-based strategy for your media-mix is the best way forward. So, use both traditional and digital in a symbiotic fashion and you are well on your way to a successful venture and even better results.