Find Your Audience with the Mint Notice Ads 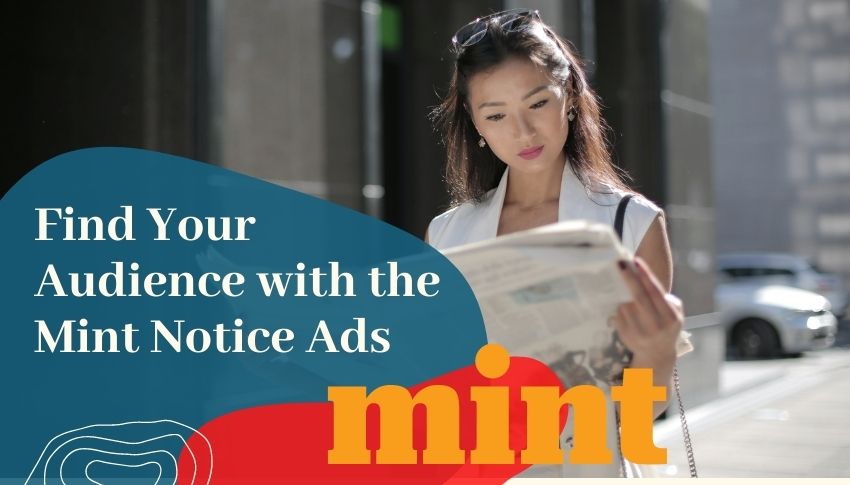 Newspapers have always been preferred as a reliable and credible source of information. Even as the industry seems to dwindle worldwide, India’s print media status is growing by leaps and bounds. Be it circulation, readership or sales, there has been a surge in revenue. This makes it the largest global market for the industry! Any newspaper advertising agency will reiterate the same due to the profound necessity in daily life.

In case you didn’t know - there are 118, 239 registered newspapers across the country. Each comes with its own quirks, advantages and preferences for various strata of readers. However, not all offer the same levels of quality and presentation. It’s only a handful that really deserve your attention. For instance, names like The Times of India and The Hindu are good mediums for public notice ads in newspapers.

And in the sphere of financial dailies, Mint is a name that you cannot ignore.

Here are some major reasons why it has a strong impression on readers within India.

Why Advertise in Mint – Can it Help Reach Your Target Groups?

Besides the typical stories of international and national stories, some newspapers focus more on matter related to stocks, finance and everything in-between. These newspapers are called financial newspapers. People often hire a newspaper advertising agency to advertise in them since they are crucial to the economy. However, reading them can prove to be difficult for a layman who might not be familiar with the intricacies of the business world.

This is hardly the case with Mint.

Published by HT Media, it holds its status as one of India’s premium business news publications. This is partially due to its clear writing, analysis and presentation and partially due to its core values of objectivity and credibility. Being a great option for releasing public notice ads in newspapers, it primarily targets readers that are business executives and policy makers.

And here’s why it works among them:

The newspaper takes four to five levels of checks before being finalized. Alongside this, it draws inspiration from the Wall Street Journal in regards to name, writing and values. These distinguishing factors make it a cut above the other existing newspapers in the market – a fact that any newspaper advertising agency will attest to. Consequently, its status as a leading business daily makes it a good choice for regions such as Delhi, Bangalore and Mumbai.

You can also release a newspaper advertisement in Mint by using its weekend supplement called Lounge - a popular magazine that centres around topics of interest such as lifestyle, food, culture and other such subjects. The same publisher, HT Media, also publishes the reputed Hindustan Times. This is another sought-after English language newspaper that receives a good reception among English-speaking audiences and even outperforms market segment leader Times of India in certain areas.

As per the IRS, its Average Issue Readership has increased from 299,000 in 2017 to 342,000 in 2019. In terms of readership, it is known as the second-best business paper across the country! From its inception in 2007, it has carved a niche in the newspaper industry – which was the initial idea behind the inception of the name ‘Mint’. “We want to break away from the clutter. It’s an unusual name for an unusual paper” – Rajan Bhalla, the Business Head of Mint.

To make your presence impactful on print, Bookadsnow is the way forward.

Not only does it offer a 24/7 ad booking facility but also customized solutions for every individual and business. Helping you make the most of your advertising ventures, you can expect the best response from your recruitment ads, public notice ads and other such advertisements in newspapers. So, don’t think twice – get in touch with us to know about how we can take your business to the top!