Search for a Partner Made Easy with Amar Ujala Matrimonial Ads 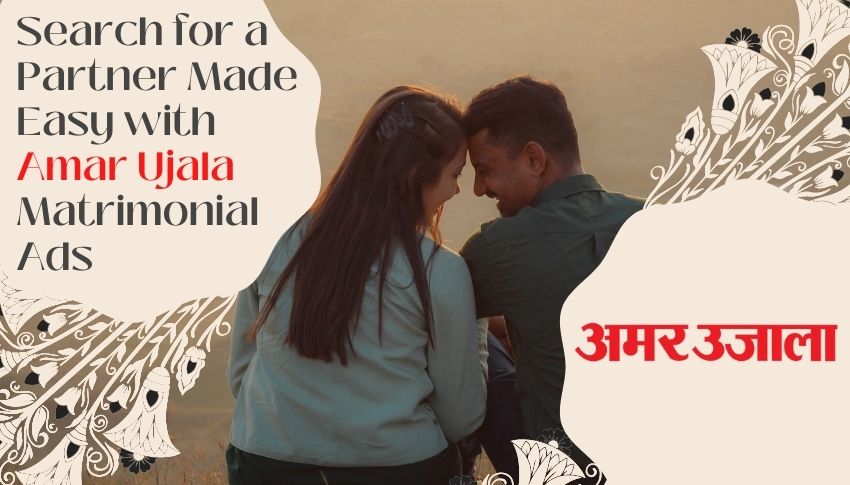 The inception of the newspaper dates back to 1605 – it was called ‘Relation’ and was published in Antwerp. And by the mid 19th Century, releasing a newspaper matrimonial ad became quite common worldwide. But it was only in the 1930s that Indian families started relying on their match-making abilities to find suitable partners for their sons or daughters. Notably, an Amar Ujala matrimonial has also stood out as a good option today for the same.

While we may have glanced at them while reading the newspaper, these actually serve to build bridges between individuals and families. Nobody can doubt the credibility of the printed word – which is why releasing a matrimonial advertisement in Amar Ujala is worth the time and effort. They were popular as far back as the 19th Century and are still effective in the search for suitable life partners.

What are matrimonial ads?

These are advertisements that generally take the shape of classified ads (and placed in a similar section) for the purpose of finding eligible and potential brides/grooms. They are search mediums rather than for promotional purposes. You can also enhance their appeal by modifying their colour, font, border and other elements. Hence, they are charged by words and the exact space it occupies on a page.

They can also be categorized under specific preferences based on the set requirements of families. But by choosing a good newspaper which has several editions across the country, your advertisements will surely get the reach it deserves. With this in mind, what better way of getting your messages across than through an Amar Ujala matrimonial! Here are a few compelling reasons why the search for a partner can become easier than ever just by advertising here.

Widespread popularity: Renowned as the 3rd largest Hindi daily, this newspaper has a great position as a leading newspaper in India. It covers 6 states, 2 Union Territories and 179 districts. Here are some of the regions where an Amar Ujala matrimonial would be most suitable:

Impressive statistics: It’s not just about the title it carries. It has also the numbers to back it up. Did you know that a Hindi newspaper advertisement here enjoys a total readership of 4.70 crore readers? This easily makes it one of the most widely read newspaper in India. Amar Ujala also enjoys a staggering circulation of over 1,700,000 copies.

Remarkable history: Heritage definitely plays a role in a preference for a newspaper. That’s why there is now a strong preference for releasing an advertisement in Amar Ujala. While everyone knows that it is one of the best today, not many know that it is the product of a ‘free’ India created as far back as 1948. Following our independence, it was founded on the grounds of truth and objectivity.

Better Targeting: Besides the choice of editions, supplements have always been helpful for reaching nice audiences based on their varied interests. This newspaper puts forward several popular names to help you target the people that matter. Here are some you should know about.

Trusted medium: This newspaper is recognized as a printed space where opinions are heard and voices are given a platform. The editorial team deserves full credit here for its well-crafted and timely information. Keeping objectivity at the centre, its factual reporting makes a great companion for readers. So if it’s an Amar Ujala matrimonial, people are more likely to pay attention to your advertisement.

How Can I Advertise My Matrimonial in a Newspaper?

Selecting a publication is the easy part. But releasing the ad is always a tiresome affair. Luckily, we at Bookadsnow seek to make the ad booking process of a matrimonial as simple as simple can be. Whether an English or Hindi newspaper advertisement, we provide the best advertising rates so that you can advertise your newspaper ads in the matrimonial section with ease.

Here’s how easy it is to book an Amar Ujala matrimonial with Bookadsnow:

So make all your newspaper advertising adventures a success!

Get in touch with our media experts today!