5 Factors That Play a Key Role in Newspaper Advertising 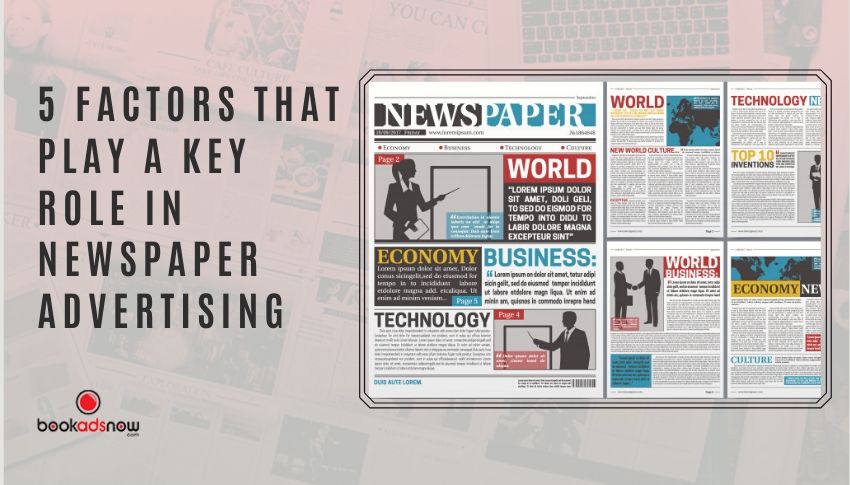 Newspapers have been around for centuries, and surprisingly, their relevance hasn’t faded away with time as most would have speculated. It has become a major part of advertising spends by a variety of brands today. In fact, consumers till date have continued to place their faith in newspapers.

This is of course due to the physical presence of a newspaper – the fact that one can see and touch it makes it a credible and trustworthy medium. Advertisers stand to benefit largely from this. As a matter of fact, there is more brand recall due to the non-intrusive characteristics of ads.

When people come across newspaper ads, they are not forced to see it in any way. Compared to television and digital media, newspaper advertising scores full points in this regard. Readers are more conscious about newspaper ads which are one of the main reasons why they are still relevant today.

Here are 5 vital factors that play a role in newspaper advertising.

The type of ad can be broken down into two sections. One talks about the purpose behind the said ad (recruitment, public notice, etc.) while the other is a matter of presentation (display, classified, etc.) Once you determine the objective behind newspaper ads, it is important to consider its physical appearance as well. Classified ads are relatively small, text-based ads while Display ads relate to larger-size ads that utilize a variety of fonts, colours, graphics, etc. as a means of promotion. Hence, the impact, as well as the cost, will greatly vary when choosing between the two.

There is another variable when it comes to newspaper advertising – the day of release. As a general observation, newspaper readership is at its peak during the weekends since chances of reading newspapers tend to be higher. Hence, any INS advertising agency will factor costs accordingly. Similarly, releasing ads during festive occasions or popular events such as IPL tend to bump up ad rates within the said periods. The benefits for advertisers, however, tend to speak for themselves.

In a simple sense, larger newspaper ads are obviously going to cost more along with more viewership of the ads. Ranging from full-page ads to half-page and sub-sections, ads are also sold in fractions. These also vary based on the status of the newspaper where rates tend to be higher. Based on these, you can choose a size that balances both your budget and requirements.

Colour has a natural way of drawing readers to something. Hence, colour ads will cost more than the average black and white ones due to their widespread appeal. While monochrome ads are cheaper, colour ads offer great value for money considering both your objectives and target audience. This cost, however, will vary with the newspaper ad agency you select.

Front page or back? Left-hand side or right? Positioning has a great impact on the final result as well as on the amount you spend on your newspaper ads. For instance, readers tend to focus more on the right side while reading and hence, rates are higher for this position. It goes without saying that an ad on the front page will have a higher impact (as well as cost) than an ad positioned in the pages inside.

Another pillar of newspaper advertising is the number of times you choose to release your newspaper ad. It is popularly understood that a one-time ad will cost much more than running the ad for five times in the same publication. Hence, advertisers can avail bulk deals that offer discounts when they look at the frequency of the ads.

Not often considered important by advertisers or individuals but choosing an INS advertising agency has tremendous benefits to both cost and effectiveness of the ad. Take Bookadsnow for instance. While offering professional assistance to both advertisers and first-time individuals, it allows one to book newspaper ads in the country’s leading newspapers with ease. It also wins due to its strong network with media houses which makes it easier for them to negotiate ad rates. Hence, choosing a newspaper ad agency will also determine the success of your advertising goals.

To get the best results, keep these 5 pointers in mind and get only the best for your advertising goals.