Which Newspaper will Boost Your Business Promotion Strategy in Chennai? 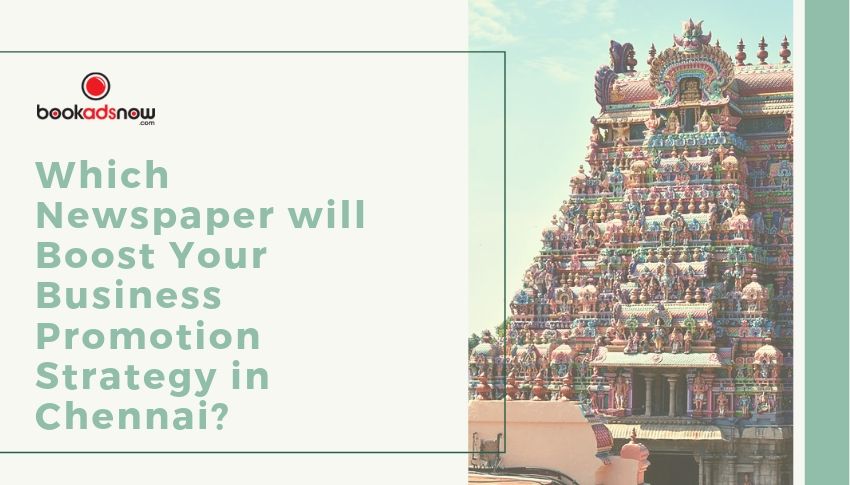 Tamil language, Pongal, Chettinad cuisine, excruciatingly hot weather, strong intoxicating coffee culture, temples, Marina Beach, south cotton saree, Carnatic Music and British era architecture are some of the most interesting facts of the city, Chennai. Considered as the cultural capital of India, Chennai is defined by rich traditional aspects which makes it different from the rest of India. In fact, the people of Chennai are quite protective of their culture and they rarely indulge or encourage the usage of Hindi for conversation. English and Tamil are the dominant languages here. Hence, if you are planning to promote your business amongst the Chennai audience via newspaper advertisement, it is recommended to tap on English and Tamil dailies.

What are the Perks Associated with this Business Strategy?

When it is all about promoting your business in Chennai, it is safe to tap on English and Tamil dailies, if you want a healthy viewership and ROI as the end result. It is because and as we have mentioned before, conversation in Hindi is not entertained in Chennai by the locals. It is, in fact, so intense that they do not even speak in Hindi to the outsiders. Hence, it is quite obvious that the Hindi dailies in Chennai will not experience a healthy readership and circulation. Therefore, promoting your business in Chennai via English and Tamil newspapers is a wise decision. Furthermore, to make the process of releasing an Ad simpler, you can get the work done via a newspaper advertising agency in Chennai to get a better result.

What are the Best Newspaper for a better Business Strategy for Chennai?

As we have already mentioned Tamil and English are the most prominent languages in this region, it makes sense to release newspaper advertisement in one with healthy circulation and readership. In this regard, The Hindu and Daily Thanthi are the best newspapers to tap on.

The Hindu- Not to mention, The Hindu is one of the most popular newspapers in South India. In fact, the circulation of the newspaper has increased in South India by 20% as per the Audit Bureau of Circulations. With its HQ in Chennai, Tamil Nadu, the publication has a circulation of 4,81,197 copies in Tamil Nadu with 3,72,334 circulation in Chennai alone. Hence, the data in itself makes it clear that advertisers seeking to promote their business in Chennai must publish an Ad in The Hindu for better engagement and an unmatched ROI. The Hindu serves as the best newspaper for releasing an Ad. You can do the same via a newspaper advertising agency in Chennai. Releasing Ad here will not only attract the locals but also audiences coming from other states.

Daily Thanthi- Daily Thanthi- When it comes to promoting the business among the Tamil audiences exclusively, releasing Ad in Daily Thanthi is the solution. With its HQ in Chennai as well, the publication enjoys a total circulation of 1,714,743 copies daily with 482,722 circulations in Chennai alone. daily Thanthi advertisement for promoting a business will definitely give rise to better engagement with the newspaper Ad followed by a healthy viewership and ROI. Hence, it is one of the best channels for targeting Tamil speakers exclusively. You can do the same via a newspaper advertising agency in Chennai.

However, if you fail to find a reputed a newspaper ad agency in Chennai, turn to Bookadsnow for releasing newspaper advertisement within a few simple steps.

A Few Words about Bookadsnow to Release an Ad in Chennai

Though the HQ is found in Kolkata, Bookadsnow covers every part of India with its wings of services. The 30+ years of experience coupled with the INS accreditation gives Bookadsnow the much-needed edge in the media sphere. Apart from maintaining a healthy relationship with media houses and clients, we have the potential to negotiate Ad rates with various media houses to provide the best deal to our clients. Lastly, an expert in-house media team supervises the advertisers at every step of booking Ads along with providing the best placement for a newspaper advertisement.