Aaj Tak- the Most Promising Channel to Release TV Ads 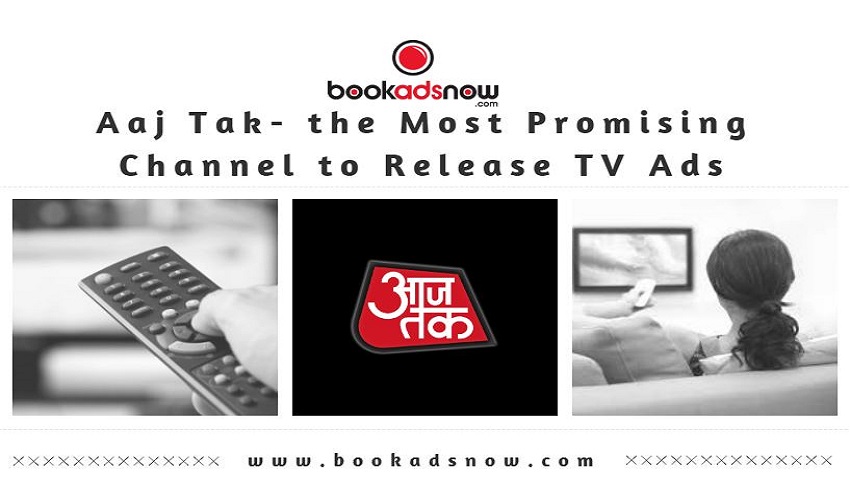 Tapping on the right channel to release television advertisement needs to be near perfect. It is precisely a huge investment by the brands whereby they are entitled to blend audio and visual effects backed up by a great storyline. Nothing beats the power of TV commercials which have the potential to leave a deep impact in our mind while some Ads becomes a memory for us. Furthermore, television advertising is the path to portray a brand's ethos and throw light on the brand personality. Hence, choosing the right TV channel with a healthy impression is crucial.

Hence, What Type of Channel to Choose for advertising?

While most of the channels support various news channels, are one of the very few channels where one can air television advertisements coming from different fields. And while India supports a plethora of news channels, Aaj Tak is one of the most popular news channels and something that we have seen since our childhood days. Given this fact, it is absolutely rational on your part to ask the reason to justify our belief. Thus, familiarise with the legitimate reasons that drive the advertisers to book Aaj Tak advertisement in order to spread their brand name among the mass.

Launched on 31st Dec 2000, Aaj Tak is the most respected, trusted and followed Hindi news channel in India. A part of the TV Today Network, the channel did not seize to dominate the media space owing to its exquisite task of delivering news after a thorough research about a particular subject.

The channel was established as a half-hour daily news & current affairs programme on Doordarshan. However, its fearless performance to cover the latest news with an addition of edge, it developed as the most watched 24hrs news channel for 17 years in a row. Not just that, owing to its journalistic brilliance, the channel has bagged each and every Industry Award as the nation’s most preferred Hindi News Channel.

Again, as per BARC (Broadcast Audience Research Council), Aaj Tak is the top Hindi news channel of the nation with an unbeatable impression in rural as well as urban regions. As per BARC 2018 week 2 reports, the channel has seen a total impression of 110122 (000s) sums. From this number, the share of

Speak of Deja-Vu and week 17 saw the same thing as per the BARC reports of 2018.

Hence, the massive and unbeatable popularity of the channel works as the fuel to drive advertisers to indulge in Aaj Tak advertisement, thereby enabling their brand name to reach the mass in no time. However, recently it was reported that Aaj Tak advertisement rates have increased by 25%, especially for the prime-time slot which is estimated to be higher. This is a matter of concern for the medium scale advertisers who probably cannot spend a lump sum amount for indulging in television advertising. Hence, familiarize with Bookadsnow to book advertisement in Aaj Tak channel within a price range with no other Ad agency can provide you in the market.

However, is Bookadsnow a mere Ad agency?

Bookadsnow- an online media planning, buying and releasing portal where brands get the opportunity to book advertisement for TV without any hassle. In other words, talk of adding an edge to booking television advertisement and Bookadsnow will provide you with one.

We are present in the media sphere for more than 30 years which has saturated us with the tips and tricks that will enable an advertiser to earn healthy ROI via television advertising. And to take things a notch up, we have the extra perk of INS accreditation. However, what allows us to stand out in the market is our policy of not displaying the card rate for television advertisement. We can negotiate the Ad rate on your behalf to put forward the best Ad rate in the market. Not just that, we can provide you the best spot buying and productive spot placement backed up by allocation with the concerned channel on behalf of our clients.

Furthermore, we are outfitted with Live TV Ad Monitoring team who keeps the clients updated about the Ad timing and the position of the advertising campaign. Moreover, the presence of an expert in-house team helps us to guide our clients through the media planning journey, from start to finish.