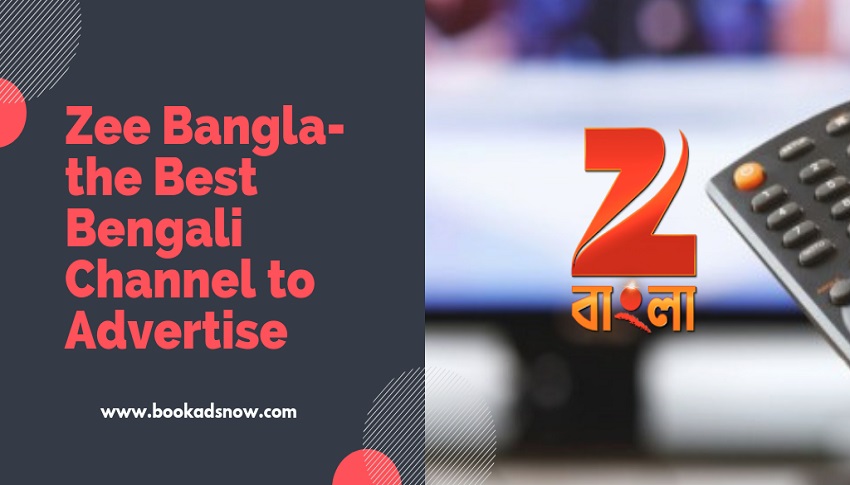 Trust us when we say that Zee Bangla is the best channel to air a television advertisement, thereby capturing the attention of Bengali audiences. We all know that nothing beats the charm and the magic involved in releasing a television commercial. When digital advertisements were not around the corner, it was television advertisements which played a major role to educate us about various product and services. The synergy of an attractive storyline backed by audio and visual effects appeals to our senses to point to compel us to buy a product or a service. Of course, television advertisements throw light on the brand ethos and helps in churning the personality of the brand, thereby educating the masses about the same. Hence, to double up the effects, tapping on a right TV channel is a crucial task and Zee Bangla does a complete justice in this regard. Why? We shall discuss it in some time!

But First, Things to Consider before Tapping on a Television Channel!

Why Zee Bangla of all the Channels?

Launched in 1999, Zee Bangla has changed the entertainment scene catering to the Bengali society. Operated by Zee Network under the ownership of Essel Group, the channel has redefined the essence of Bengali culture through various shows to uphold the culture worldwide. Zee Bangla is the No. 1 GEC in Bengal, with a 44% market share (WB U+R universe) and is still growing. At present the channel all set for a makeover with a new brand promise 'Notun Chhondey Likhbo Jibon’ whereby the channel is getting a fresh position to inspire the middle-class Bengali women in order to overcome their inner fears, identify their hidden potential and orchestrate a better life for themselves and the loved ones.

With this brand-new avatar, Samrat Ghosh (Business Head- Zee Bangla and Zee Bangla Cinema) and Amit Shah (Cluster Head - Regional Markets, ZEEL) is of the belief that the channel will take precession in all slants of content design, inspiring viewers to celebrate their dauntless spirit and make their lives truly extraordinary. Furthermore, as per the reports of BARC for week 34, Zee Bangla tops the chart among all the Bengali channels with 235463 (000s) impressions, thereby beating other Bengali channels in the league. Not just that, as per BARC, in week 45, Zee Bangla yet again tops the chart with 333629 (000s) impressions.

But that's not it all ends!

In the words of Samrat Ghosh informed, the urban market of Zee Bangla holds a 50% share. To double up the effects, out of top 10 programmes, Zee Bangla is holding top 5 programmes with 14 prime time slots.

In the words of Amit Shah, 15 years ago Bengali channels together had the potential to create approximately 50 hours of content whereas today Zee Bangla alone is producing this content. Furthermore, the viewership of the channel in Bengal is increasing by 5% CAGR.

Amit Shah also added that the estimated advertising market across the whole Bengali television is around 90% which attracting the national advertisers to release Ad here backed up by a lot of merits. Zee Bangla is gaining the benefits of both the worlds where the national and local advertisers are coming together to get hold of the slot of their choice and to reach out to the Bengali audiences on an international level as well (as the channel is in partnership with the North American Bengali Conference).

Hence, the popularity of the channel along with its stronghold in the advertising market lays down a strong platform for the advertisers to indulge in releasing television advertisement for better ROI. However, the popularity of the channel makes it very clear that Zee Bangla advertisement rates will be exorbitant. While for the big shot brands it might not be an issue, for the small-scale brands releasing a television advertisement is a task in itself involving a lot of expense. This is when Bookadsnow takes up its role-playing task!

A Walk through the Path of Bookadsnow for Understanding the Perks!

Bookadsnow is an online media planning, buying and releasing portal where brands can involve in a hassle-free booking of a television advertisement. The best part is that one can book advertisement in a few simple steps, a process which has given an edge to the television Ad booking system.

With an experience of 30+ years in the media sphere and an accreditation by the Indian Newspaper Society (INS), we have given birth to a healthy relationship with plenty of media houses across the nation. Moreover, our policy of not displaying the Ad rates is what makes us stand out in the market. We have forged the system of negotiating the rates for a television advertisement, spot buying and productive spot placement backed up by allocation with channels like Zee Bangla on behalf of our clients.

Furthermore, we are outfitted with the Live TV Ad Monitoring facility to keep the clients notified about the timing and the positioning of the TV commercial. Moreover, with the presence of a proficient in-house team, we guide our clients through the media planning journey, from start to finish. Lastly, we provide the clients with a report of their television advertisement with detailed proof to allow the clients to learn about the impact of their television advertisement campaign. If you are looking for the best TV advertising agencies in India, trust Bookadsnow to book an advertisement in Zee Bangla without burning your pocket.

Call us @9830400021 or drop us a mail @ info@bookadsnow.com to learn more about booking Ads in Zee Bangla at the best possible Zee Bangla advertisement rates.