This Poila Baisakh, Reach the Bengali Readers Via Bookadsnow 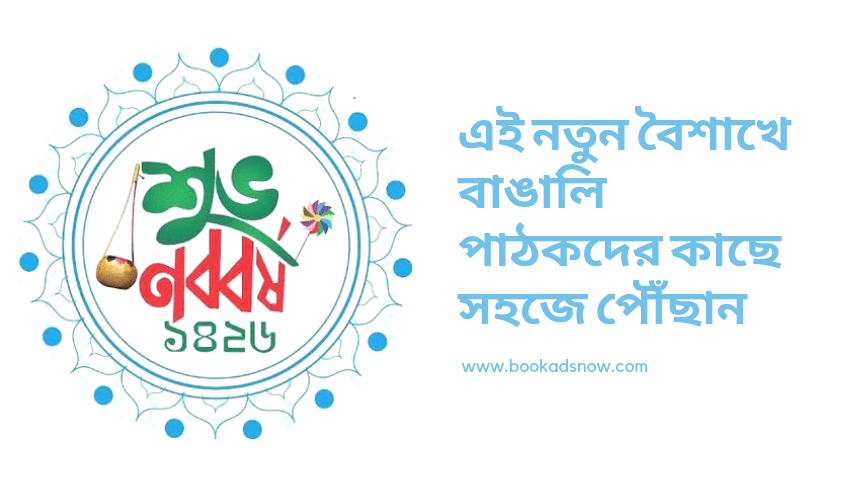 Bengali New Year is around the corner and the Bengalis can't wait to be a part of this joyful occasion and indulge to their heart's content. Generally celebrated on 15th April, the festival is all about adorning new dresses, gorging on sumptuous food and celebrating the true essence of Bangaliana via Bengali music, culture, poetry recitation, etc. It is a significant Bengali festival (after Durga Puja) which is celebrated with much warmth and enthusiasm by Bengali community all over the country. It also happens to be a national holiday in Bangladesh.

Since it is one of the most significant Bengali festivals, before Poila Baishakh, most of the brands come with a heavy discount on their products and services which they name as Chaitra Sale. If you are residing in Kolkata, open a newspaper (Bengali or English) and you'll come across pages flooded with Ads about such offers. Hence, to reach the Bengali community with Ads about product offers, advertisers will never overlook the strategy of newspaper advertisement.

Why Anandabazar Patrika in this Poila Baisakh

Today, the publication is a top-notch Bengali daily providing excellent news at the national, global and local level. Covering genres like politics, entertainment, sports, lifestyle, finance, Anandabazar Patrika is the most celebrated Bengali daily in Eastern India. Hence, the reputation and the exceptional performance of the newspaper drives the advertisers to book Anandabazar Patrika classified, especially during the Poila Baishakh season.

To make things more exciting, the publication has a total circulation of 1.2 million copies in Kolkata and Mumbai backed up by 60 lakhs readership. It also comes with a range of supplements, thereby giving the advertisers yet another place to release Anandabazar advertisement in order to earn viewership of the filtered readers. Hence, such factors make releasing Anandabazar classifieds one of the key advertising strategies in this Poila Baisakh for earning a healthy ROI.

But Why the Times of India in this Poila Baisakh

While we totally understand that Anandabazar Patrika, being a Bengali newspaper, turns out to be the perfect platform for releasing newspaper ad in this Poila Baisakh, why did we tap on an English newspaper? The Times of India is the best platform to release an advertisement in English newspaper. In Kolkata, the newspaper experiences a total circulation of 2,86,037 copies daily, thereby making it one of the most read English daily in Kolkata. Owing to its perfect journalism skill and bold steps to provide the readers with a true piece of news, the newspaper has raised a storm of revolution in the sphere of media. The number of competitors of the publication simply proves the point.

Today, the publication is present in almost every region of India. Not just the metropolitan cities, The Times of India has its editions in small towns as well. Precisely speaking, the newspaper encounters a daily circulation of 3,198,449 copies backed up by a total readership of over 1.3 crores. That is absolutely unbeatable!

Hence, these reasons make it obligatory for the new age advertisers to release Times of India advertisement catering to Poila Baisakh offers on various products. It is in fact one of the best newspapers to target the English readers in Kolkata which no other advertisement in English newspaper can provide. Plus, the publication consists of a plethora of supplements. Hence, brands choose to indulge in Times of India advertisement not just to earn a good ROI but to touch the sentiments of the Bengali audiences.

And here is one brand that can help you in releasing newspaper advertisement within a few simple steps. What is it? Bookadsnow- without any second thought!

How Bookadsnow can help you in this Poila Baisakh

Bookadsnow is an online media planning, buying and releasing portal through which the new-age advertisers can book advertisement in newspaper online. It was designed to give the idea ‘simplicity backed up by great results’ a shape. Hence, we have made the Ad booking process remarkably simple which can be wrapped in a matter of a few minutes from your comfort zone. Being certified by the INS, we have a long-standing relationship with media houses across the nation.

Furthermore, the media specialists of Bookadsnow will supervise you at every step of booking newspaper advertisement along with providing great Ad placement. However, what makes us stand out in the crowd is our skill to negotiate the Ad rates. We make sure to lower your newspaper advertisement cost by negotiating the rates with renowned publications on behalf of our clients. Apart from the given information, Bookadsnow also releases TV, magazine and radio Ads.