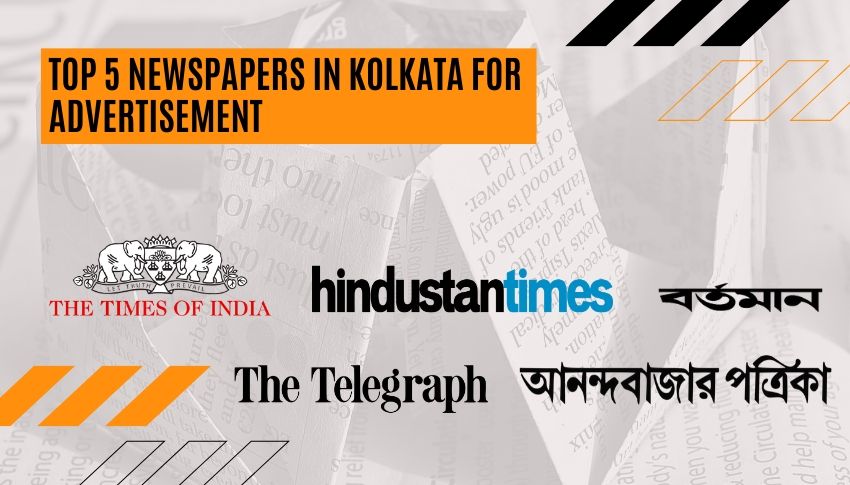 Journalism in Kolkata can be traced back to the 1800s with its adamant pursuit of justice during British-colonized India. In fact, there was a time when half of the total newspapers published in India originated from Kolkata. With such a diverse and rich history of quality journalism, newspapers in Kolkata have proven their worth to their readers and therefore garner a loyal readership among natives.

It goes without saying that the number of newspapers in Kolkata has increased manifold in the 21st century. However, trust in them hasn’t waned. This can be determined from the fact that newspaper ads have some of the highest impact per impression among many forms of advertisements in contrast to different mediums.

Let’s look at the top newspapers in Kolkata that give the most bang for the buck.

Kolkata’s Top 5 Newspapers: All You Need to Know About Them

The oldest Indian English daily still in circulation, the Times of India is owned by The Times Group. It has led the path for more or less all major English newspapers in the country and is seen as the largest circulated English daily. It has many editions such as the Sunday TOI, Calcutta TOI, etc. which aim to target different demographics. The Times of India’s second half of 2018’s circulation as per the audit bureau of circulation was 2,826,164 and its total readership in Kolkata in Q2 of 2019 was 6,32,000. The type of advertisements you can book in the Times of India newspaper are classified text ads, classified display ads and display ads or even full-page ads of different sizes.

Owned by HT media, Hindustan Times was inaugurated by Mahatma Gandhi himself and is known for its role in the Indian Independence movement. The second-largest English newspaper in circulation, Hindustan Times’ 2018’s H2 circulation as per the Audit Bureau of Circulation was set at 1,168,613 - giving a huge advantage for the placement of ads. Covering politics, finance, business, sports entertainment and international news, it has various versions like the HT City that cater to different target groups and is known for its more modern typography and style. Hindustan Times can be approached through any reputed INS accredited advertising agency.

Often considered the best Bengali language newspaper, Anandabazar Patrika was published back in 1876 in a small village of Magura and is among the oldest newspapers in India. Owned by the ABP Group, it is also among the highest circulated news dailies in India despite catering to only a Bengali readership base. Its readership, according to the IRS, stands at 12,379,000 for the second quarter of 2019. Known for quality journalism, Anandabazar Patrika continues to be the top Bengali news daily with some of the highest prospects for advertisements in Kolkata. This is because of the loyalty and respect it has garnered for decades.

The Telegraph is a newer English daily published back in 1982. Owned by the ABP Group as well, it has quickly risen to be one of the best newspapers in Kolkata. According to the IRS, The Telegraph has the highest readership for an English newspaper in Kolkata at 7,39,000 for the second quarter of 2019. This newspaper is known for its comprehensive reporting on international and national issues.

First published on December 7th in 1984 by Barun Sengupta, Bartaman Patrika has the second-highest circulated Bengali newspaper. It has different editions that get published from different regions of West Bengal and as per the Indian Readership Survey, its total readership for the second quarter of 2019 stands at 97,39,000. Bartaman Patrika garners its unique target group and is known for its unique and relatively nonpartisan reportage. Perceived as trustworthy by a large audience, it has grown to be the second most popular Bengali daily today.

With such a vast array of options, you can optimise your advertisements and choose the one that fits your target group. This is made easier through www.bookadsnow.com, an INS accredited portal that allows you to book ads in both digital and print. Bookadsnow also provides assistance with dedicated media planning experts, readymade templates, last-minute ad booking, rate matching guarantee among other additional services.

Booking ads in any of the above 5 newspapers is made easier through Bookadsnow.