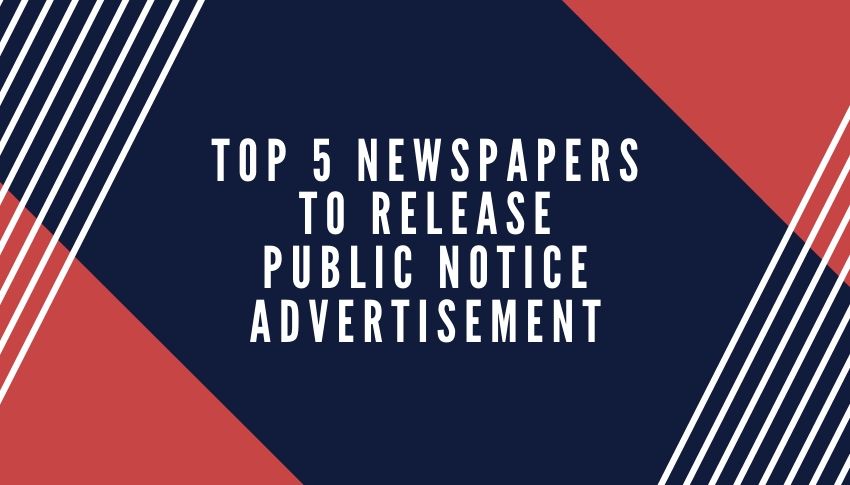 It is that time of the years when companies indulge in releasing public notice ads to any important announcement for their target audiences. To begin with, public notice ads differ from other ads like property, matrimonial, obituary, etc. These ads serve an essential part of the legal processing of a company. A usual practice by the companies, such ads is released to notify the citizens of any ongoing or completed legal development which are significant. Hence, whenever it comes to legal proceedings catering to general public awareness, releasing a public notice advertisement is the best way to convey the message.

Hence, it is essential to choose the right newspaper that will convey your message to the concerned party with ease. Therefore, consider the below-given list of top 5 newspapers if you are planning to release a public notice ad.

The Economic Times- Over the years, Economic Times has emerged as a brand in itself working under the Bennett, Coleman & Co. Ltd. The newspaper was launched as early as 1961 with the objective to provide the Indians with information revolving around the financial situation of the nation. From international finance to share prices and any announcement by the government, The Economic Times is your one-stop destination to all such information. With its HQ in Mumbai, it published in the top-notch cities such as Mumbai, Delhi Bangalore, Chennai, Lucknow, Kolkata, Hyderabad, Jaipur, Nagpur, Ahmedabad, Chandigarh, and Pune.
Today, the newspaper experiences a total circulation of 377,789 copies (approx) daily along with a readership of 2.8 lakhs. Hence, it is undoubtedly one of the top 5 newspapers to release different types of public notice advertisement.

The Financial Express- The Financial Express is yet another newspaper that is perfect for releasing public notice ads and enabling it to reach your target audience in no time. From news catering to the stock market to other business-centric information, The Financial Express has established itself as one of the best platforms for the same. Established in 1961 under the ownership of the prestigious Indian Express Group, Today the newspapers enjoy a circulation of 84,000+ copies daily and an estimated average readership of 1,57,000 (mainly in southern and northern India). It has its editions in Bangalore, Chennai, Chandigarh, Hyderabad, Delhi, Kolkata, Kochi, Lucknow, Pune, Mumbai, and Ahmedabad.

Business Standard- Business Standard is one of the largest Indian English-language financial daily published by Business Standard Ltd in two languages including Hindi. Founded in 1975, the newspaper does extensive coverage on the Indian economy, infrastructure, international business and trade, stock and currency markets, corporate governance, apart from a range of other financial news, opinions and insights. As of January 2019, it is the 3rd largest selling business newspaper as per IRS with a total readership of 505,000. The main English-language edition comes from 12 regional centres along with reaching readers in over 1,000 towns and cities across India.

Mint- Mint is a one-of-its-kind newspaper and is a new age publication founded in 2007 under HT Media. While a lot of Indians do not reach out for business newspapers, Mint has filled up, thereby earning the second position among the top business newspapers. Their hard work and dedication have enabled them to establish key markets in Delhi, Mumbai, Chennai, Bengaluru, Chandigarh, Pune, Kolkata and now Ahmedabad too. Mint is a unique newspaper as they have an exclusive agreement with the Wall Street Journal to publish Journal-branded news and information in India.

The Business Line- Business Line is an Indian business newspaper that covers major industry stories catering to agriculture, aviation, automotive, IT in their weekly special issues. The paper is printed across 17 centres, thereby reaching all the metro cities as well as developing Tier-I and Tier-II cities. Business Line has a daily circulation of 1,17,000 copies as per the Audit Bureau of Circulation.

Why Release a Notice Ad via Bookadsnow?

For more information about releasing such notice advertisements, drop us a mail at info@bookadsnow.com or call us @ 9830400021.