Why Star Plus is the most Effective Medium for Advertising? 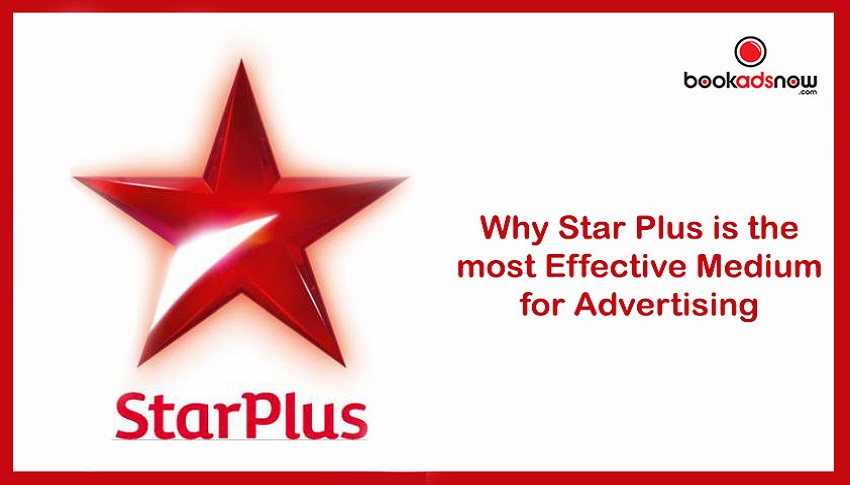 As an advertiser, if you are thinking of airing an advertisement in Star Plus but confused about the outcome, we have got you covered with this blog.

Do you remember those iconic serials aired on Star Plus which use to compel the whole family to get hooked in front of the entertainment box? A part of Star India Network with its HQ in Mumbai, Star Plus is one of those Hindi entertainment channels whose shows have been cherished through generations by a plethora Indian families. The daily soaps used to be a mode of entertainment in our daily lifestyle thereby compelling to indulge in binge-watching of TV serials.

Again, Indian television has always been in a rising state. In fact, the Indian television viewership is in its boom phase as per the Broadcast Audience Research Council (BARC) India survey. Television viewership is rising in India with a 7.5% increase in TV homes in the country. Moreover, as per a survey conducted by BARC in 2018 based on 300,000 homes in India, the TV viewership has increased by 12% in the nation. Furthermore, out of the total viewership, 69.3% of the respondents prefer family drama or serials.

Hence, the given data puts Star plus as one of the top-notch channels viewed by the Indian families as a mode of entertainment. It can be proved by the weekly reports of BARC where Star Plus made a comeback in week 28 (July 8-14) with a total viewership of 629,101 (000s). Again on the 31st week (28th July- 3rd August 2018), the channel secured the first place catering to Hindi general entertainment channel genre with 450504 Impressions (000s) on the urban level and 179438 Impressions (000s) on the rural level.

Hence, the given popularity of the channel drives the top brands in the market to display Star Plus advertisement to promote their brand name and throw light on the brand personality. It produces the most profit, creates more sales and consistently exceeds everything else.

However, there are other reasons that act like a secret weapon encouraging the advertisers to indulge in television advertising with Star Plus.

Hence, Tap on the Reasons to Book Star Plus Advertisements!

Speedy Reach: Star Plus is the leading Hindi GEC not only among the other channels in Star India Network but also among the other Hindi entertainment channels. It has a viewership share of 10% among the top 10 Hindi-Entertainment Channels in the urban market. Hence, we can claim that the channel is the most effective TV advertising medium. It is humongous and by far the most popular medium for advertisement catering to all age groups.

Long-Term Success: Star Plus advertisement comes with a gamut of short-term effects, such as encouraging sales, boosting online search and generating word of mouth online and offline. Moreover, it works fast. However, instant progress is only a part of the Star Plus advertisement. The consequences of Star Plus television advertising also accumulates over time. The longer the Ad campaign, the deeper will be the effect thereby giving rise to long-term success.

Campaign Cost: Star Plus advertisement costs are represented by the number of viewers and how well-planned the programming is as well as the size of the campaign. So there is a chance for everyone regardless of the budget!

However, what is the best medium through which one can book the Star Plus advertisement?

Have you heard about Bookadsnow? If ‘no’, then allow us to explain to you the story of Bookadsnow!

A Walk through Bookadsnow for releasing ads in Star Plus!

Bookadsnow is an online media planning, buying and releasing portal where brands can indulge in a hassle-free booking of television advertisement which can be wrapped up in a few simple steps. In other words, we have given an edge to the television Ad booking process.

With an experience of 30+ years in the media sphere and an accreditation by the Indian Newspaper Society (INS), we have developed a healthy relationship with a plethora media houses across the nation. Moreover, what allows us to stand out in the market is the absence of a pre-defined card rate for booking television Ads. We have the ability to negotiate the rates for a television advertisement, spot buying and productive spot placement backed up by allocation with the concerned channel on behalf of our clients.

Furthermore, we are equipped with Live TV Ad Monitoring facility to keep the clients updated about the timing and the positioning of the television advertising campaign. Moreover, with the presence of an expert in-house team, we guide our clients through the media planning journey, from start to finish.